Chronic Finger and Hand Pain in a Middle-Aged Woman 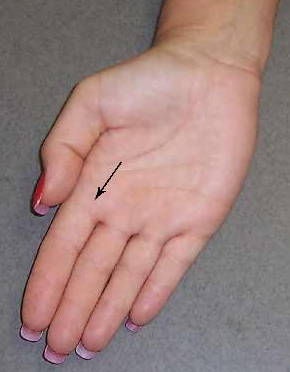 PATIENT PROFILE:
A 48-year-old woman complains of finger and knuckle pain in her right hand of 1 year's duration. She is right-handed. The pain is located over the metacarpophalangeal (MCP) and proximal interphalangeal (PIP) joints of the index and middle fingers. The pain has recently become more intense and now makes it difficult to sleep and to grasp objects.

When she awakens in the morning, the index and middle fingers of her right hand are stiff and seem to be stuck in flexion at the PIP joint; she has to force them into extension. Once the fingers have been extended, however, there is no extension deficit. The stiffness, as well as the pain, hinders her ability to pick up a cup or to twist the cap off a bottle.

The knuckles of her right index and middle fingers are somewhat swollen. She denies numbness, tingling, and loss of sensation.

For the past 5 years, the patient has had type 2 diabetes that is not well controlled. She has noticed some "arthritis" in her left shoulder and right knee in the past, and adhesive capsulitis of the left shoulder was diagnosed 3 years earlier.

WHICH DIAGNOSIS IS MOST LIKELY?

Rheumatoid arthritis (A) is a possibility, but this disease is usually bilateral and symmetric. If joints other than those in the hands are involved, they are typically small rather than large ones. This patient has no involvement of the left hand, and the other symptomatic joints--the shoulder and knee--are large.

Carpal tunnel syndrome (E) usually affects only the thumb and index finger, and it commonly presents with some sensory symptoms. Moreover, contraction deficits are not typical in carpal tunnel syndrome. Nonetheless, it is important to test for signs of median nerve compression.

Flexor tenosynovitis (C), or trigger finger, is the most likely diagnosis. Trigger finger is characterized by painful locking or snapping of the finger as it is flexed and extended. The condition is caused by inflammation and swelling of the flexor tendon sheath, which inhibits the normal back-and-forth gliding motion of the tendon; it affects primarily the superficial and deep flexor tendons at the metacarpal head. Figure 1 shows the area of involvement. Trigger finger usually affects the dominant hand of middle-aged women and is more common in patients with diabetes or rheumatoid arthritis. This patient's presentation is classic: she has fingers that become locked in extension, and she is a middle-aged woman with diabetes.

WHICH TWO OF THE FOLLOWING FINDINGS ARE MOST CHARACTERISTIC OF TRIGGER FINGER?

Although a patient with trigger finger may complain of PIP joint pain (C), palpation of the joint usually reveals minimal to no pain. Passive extension of the DIP or PIP joint while the MCP joint is flexed (E) is usually painless and does not provoke triggering.

The most significant clue to trigger finger is localization of the disorder at the level of the MCP joint. There is almost always palpable tenderness over the volar aspect of the metacarpal head (D); sometimes a palpable tender nodule is present. Swelling of the finger (A) may also be noted. Active opening and closing of the hand produces painful triggering (B) as the inflamed tendon passes through the constricted area of the sheath. Results of a neurologic examination (including tests for strength, sensation, and reflexes) are usually normal--except in severe cases that are associated with disuse, weakness, or atrophy.

In this patient, physical examination reveals minimal swelling, triggering, and significant tenderness and palpable nodules over the MCP joints of the index and middle fingers.

WHICH STUDY WOULD YOU ORDER NOW?

Trigger finger is a clinical diagnosis and no other studies are indicated to make the diagnosis (E). Studies to rule out other causes, such as a measurement of rheumatoid factor (D) would be overkill at this time and would unnecessarily increase the cost of care. The more reasonable approach is to focus energy and resources on treatment of the patient's trigger finger and control of her diabetes. If the treatment is not successful or other signs or symptoms become evident, then additional studies would be warranted.

WHICH TREATMENT(S) WOULD YOU RECOMMEND?

All of these modalities have a place in the treatment of trigger finger. The initial treatment focuses on reducing the inflammation that surrounds the tendon. Activities that involve repetitive grasping and gripping or heavy lifting should be curtailed or avoided (D). A splint that prevents flexing and locking during sleep can be worn at night (C). NSAIDs (B) might be prescribed; if they are, a nonselective COX-1 inhibitor, such as ibuprofen( (600 mg tid for 10 days), would be most appropriate for this patient. Because she has diabetes, COX-2 inhibitors should be used with caution.

Corticosteroid injection at the area of thickening in the tendon sheath (A) or in the nodule is considered first-line therapy by many clinicians. The needle is inserted over the palmar aspect of the hand, distal to the metacarpal head as shown in Figure 2. The injections can be repeated at 3- to 4-week intervals; they produce relief in 60% to 70% of patients. A maximum of 3 injections is suggested before seeking alternative treatments.1 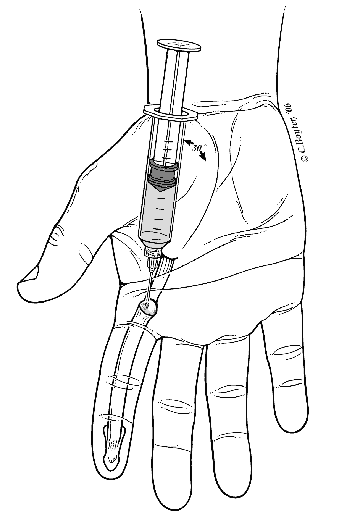 Outcome of this case. The patient was treated conservatively with corticosteroid injections and NSAIDs and is doing well.Trigger finger may be more refractory to nonoperative management in patients in whom both hands are affected and in those who have diabetes or rheumatoid arthritis. Surgery (E) is reserved for patients in whom conservative therapy fails. However, surgical release relieves symptoms in most patients.