Chest Pain, Dyspnea, and Hemoptysis in an Older Smoker 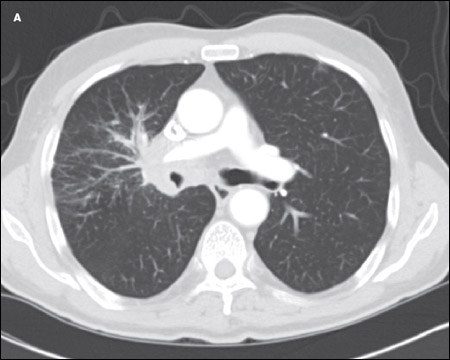 A 71-year-old African American man presented to the emergency department (ED) with chest pain, dyspnea, and hemoptysis. He had had a few ED visits for similar symptoms within the previous 4 weeks.

The patient had hypertension and a 40-pack-year smoking history; he currently smoked. There was no family history of malignancy.

Temperature was 36.8°C (98.3°F); heart rate, 86 beats per minute; respiration rate, 24 breaths per minute; and blood pressure, 120/70 mm Hg. Oxygen saturation was 98% on 2 liters of oxygen. Oral thrush was evident. There was no palpable lymphadenopathy. Heart rhythm was irregular with a loud P2; there were no appreciable murmurs. Chest examination showed diffuse bilateral wheezes and dullness to percussion at both lung bases. There was no palpable hepatomegaly or splenomegaly. No pedal edema was noted. Results of a neurological examination were nonfocal. 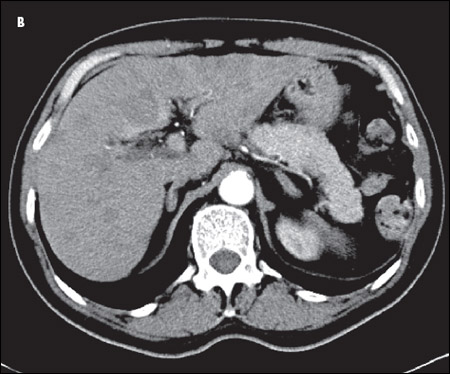 A CT scan of the chest showed an amorphous soft tissue mass that encased and constricted the right main pulmonary artery and the right main stem bronchus (A). Extensive round masses were visible in the liver; the largest mass was in the right medial hepatic lobe and measured 2.7 × 2.4 cm (B). 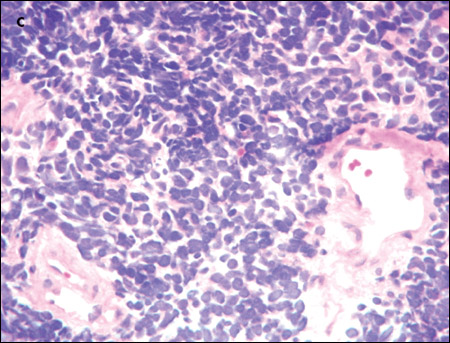 An extensive evaluation of the patient's mass lesions and cytopenias was initiated. He was HIV-positive, but results of tests for hepatitis B and C were negative. Liver function tests revealed the following levels: albumin, 3.1 g/dL; total protein, 5.8 g/dL; direct bilirubin, 0.3 mg/dL; total bilirubin, 1.0 mg/dL; alkaline phosphatase, 175 U/L; alanine aminotransferase, 156 U/L; and aspartate aminotransferase, 92 U/L. Haptoglobin level was 27 mg/dL, and lactate dehydrogenase level was elevated at 1168 U/L. The fibrinogen level was normal at 274 mg/dL, but the D-dimer level was elevated at 602 ng/mL. Results of an enzyme-linked immunosorbent assay for heparin(-induced platelet antibodies were negative. A review of the peripheral smear (C) showed no platelet clumping, schistocytes, or immature cells. Blood and urine cultures showed no bacterial or fungal growth.

Tissue was needed to confirm the diagnosis. The patient received a transfusion of 1 pool of platelets so that a CT-guided liver biopsy could be performed. The results of this biopsy were nonconclusive. However, his platelet count rose dramatically in response to the transfusion—to 150,000/μL.

The patient then underwent a diagnostic bronchoscopy and a biopsy of the lung mass. The lung mass biopsy demonstrated small-cell lung carcinoma; immunohistochemical stains were positive for the neuroendocrine markers AE1/AE3, CAM5.2, cytokeratin 7 (CK7), thyroid transcription factor-1 (TTF-1), synaptophysin, chromogranin A, and CD 56.

Unfortunately, his condition deteriorated during the hospital stay. His mental status started to wax and wane, progressive azotemia developed, and his neutropenia and thrombocytopenia continued to worsen. After a thorough discussion with the patient and his family, it was decided that he would not receive therapy for his cancer. He was transferred to an inpatient hospice service, and he died within 1 day.

SCLC is characterized by a high growth fraction, a rapid doubling time, and a propensity for early metastasis. Multiple classification systems for SCLC have been proposed. The most recent 1999 World Health Organization/ International Association for the Study of Lung Cancer (WHO/IASLC) classification divides SCLC into 3 groups.

Multiple genetic abnormalities have been described in SCLC. The most common of these are the p53 mutation, loss of heterozygosity at chromosome arms 9q and 10q, and loss of retinoblastoma gene function.4,5

There are 2 major staging systems for SCLC. The one most commonly used is the Veterans Affairs Lung Study Group system, which divides SCLC into limited-stage disease and extensive-stage disease. Limited-stage disease is defined as disease confined to the ipsilateral hemithorax and within a single radiotherapy port. Extensive-stage disease is defined as evident metastatic disease outside the ipsilateral hemithorax; this may include malignant pleural or pericardial effusions.6 About 30% to 40% of patients have limited-stage SCLC at presentation. The other, more descriptive staging system, the TNM or IASLC system, is of limited value because of overlaps in treatment and prognosis among the various stages.

SCLC is associated with many endocrine and neurological paraneoplastic syndromes. The most common of these are:

SCLC typically presents as a large central mass (as in this patient) with mediastinal adenopathy. SCLC can infiltrate the submucosa, causing either intrinsic or extrinsic compression of the bronchi. SCLC has a propensity for spreading to the liver, brain, bone, and bone marrow. The neutropenia and thrombocytopenia seen in this man can be explained by the infiltration of his bone marrow by the SCLC. In a series of 129 patients with SCLC, 30% had bone marrow involvement. However, in only 2.3% was the bone marrow the only site of metastatic disease.7 Other presenting symptoms include cough, dyspnea, hemoptysis, chest pain, postobstructive pneumonia, and the paraneoplastic syndromes mentioned above.

SCLC is very sensitive to both chemotherapy and radiation; it responds well to treatment. However, in the majority of cases the disease recurs. Compared with its role in other forms of lung cancer, surgery has a very minimal role in the management of SCLC. There is only slight evidence to support surgery as a primary modality of treatment for limited-stage SCLC.