A 73-year-old woman was found on the ground by her husband. She was unable to move her left arm or leg, and she was confused and disoriented.

In the emergency department, the patient was drowsy and unable to follow commands. She withdrew from painful stimulation to her right side but not to her left. She did not open her eyes to verbal or painful stimuli. The patient had long-standing hypertension and had been taking amlodipine and aspirin. The patient was admitted to the neurological critical care unit, where hourly neurological checks were initiated.

A CT scan of the head (A) showed small area of left parietal occipital hemorrhage that was well diffused with surrounding edema. MRI of the head (B) showed multifocal peripheral areas of restricted diffusion on T1, suggestive of bleeding. Correlative masses were seen with rounded areas of hypointensity, suggestive of different stages of bleeding. Diffuse edema surrounded these lesions. Findings were nonspecific, but possible diagnoses included partial thrombosis in the sagittal sinus, metastatic disease, abscess formation, and septic emboli. Diffuse leptomeningeal enhancement was noted, possibly from metastatic disease or infection. To distinguish metastatic from embolic disease, transesophageal echocardiography was done. Results were negative for thrombi. CT scan of the chest, abdomen, and pelvis showed no metastatic disease, and bone scan findings were normal. 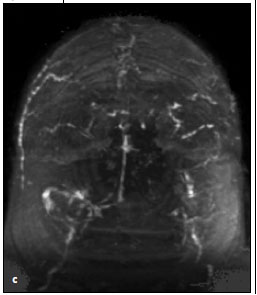 Brain magnetic resonance venography (C) was performed to rule out cerebral venous thrombosis. The test showed dural venous sinus thrombus of the bilateral transverse sinuses and superior sagittal sinus with resultant bilateral hemorrhagic cortical venous infarctions. A diagnosis of cerebral venous sinus thrombosis (CVST) was made, and heparin therapy was started. Thrombolysis was not initiated because in this setting there is no evidence that the clinical outcome is better with thrombolytics and the risk of bleeding is greater. Coagulation disorders were ruled out as a possible cause for CVST. Protein C activity was 80%; protein S activity, 71%; and antithrombin III, 100%. Results of tests for factor V Leiden mutation, prothrombin gene mutation, and antiphospholipid antibodies were negative. The patient's neurological condition improved once heparin therapy was initiated, and she was subsequently discharged to a nursing home with a prescription for warfarin.

CVST is a rare form of stroke that results from thrombosis of the dural venous sinuses. The estimated annual incidence is 3 to 4 per 1 million population and up to 7 per 1 million among children. About 75% of adult patients are women.1 CVST is a potentially alarming diagnosis. Patients can present with cerebral venous infarcts, which are frequently hemorrhagic, and with signs and symptoms of increased intracranial pressure.2 Etiologies include all genetic (antithrombin deficiency, protein C and S deficiency, factor V Leiden mutation, prothrombin gene mutation, and homocysteinemia) and acquired (nephrotic syndrome, antiphospholipid- antibody syndrome, pregnancy) prothrombotic conditions. Often, a precipitating factor, such as a head injury or pregnancy, causes sinus thrombosis in a person with a genetically increased risk. CVST can also result from mechanical causes, such as head injury, direct injury to the sinuses, or injury to the jugular veins from jugular catheterization and neurosurgical procedures. Otitis and mastoiditis can be complicated by thrombosis of the adjacent sigmoid and transverse sinuses.3 Hematological disorders are infrequent but well-established causes of CVST. However, the proportion of cases of unknown cause remains between 20% and 25%.4

The gold standard for the diagnosis of CVST is no longer cerebral angiography but MRI, which visualizes the thrombosed sinus as an increased signal on both T1- and T2- weighted imaging. Heparin has been shown to be a safe and effective therapy for CVST,2 even if hemorrhagic brain lesions are present. With heparin, there is an absolute risk reduction in mortality of 14% and in death or dependency of 15%, with relative risk reductions of 70% and 56%, respectively.5,6 Local thrombolysis with recombinant tissue plasminogen activator appears to restore flow more frequently and rapidly than heparin alone; however, there is no evidence that the clinical outcome is better. Thrombosis of the cerebral veins and sinuses is a distinct cerebrovascular disorder that, unlike arterial stroke, most often affects young adults and children. When it presents in older patients, such in our case, it is associated with a poorer prognosis. CVST has variable clinical presentations. When it presents as hemorrhagic stroke, the clinician faces the challenge of starting heparin therapy, which is contraindicated in hemorrhagic stroke while it is the mainstay of treatment in CVST.