A Case of Heart vs Head: Cardiac Manifestations of Cerebrovascular Injury

A 50-year-old man was brought to the emergency department (ED) after a witnessed syncopal event. He was awake but confused and unable to provide a history.

According to the paramedics, the patient had been working in a garage with a friend. They were both sitting, and the friend said the patient suddenly became unresponsive and slumped to the ground. He was given bystander cardiopulmonary resuscitation. When the emergency medical services arrived, the patient was awake but was unable to respond to questions. He was only able to shake his head back and forth. His blood glucose level was 160 mg/dL.

The patient had no preceding symptoms. There were no running motors in the garage, and he had no known chemical exposure.

The patient’s past medical history included hepatitis C and HIV infection, for which he was receiving antiretroviral therapy. There was no known history of hypertension, diabetes, or previous cardiac disorders. No family medical history was available.

In the ED, blood pressure was 128/84 mm Hg; heart rate, 112 beats per minute and regular; respiration rate, 18 breaths per minute; and oxygen saturation, 99% on 2 L of oxygen by nasal cannula. The patient was awake, alert, and sitting up in bed. He was able to shake his head back and forth and to move all 4 extremities in response to commands. He was aphasic; initially, he was mute and then he was able to say his name. He appeared to nod yes or no appropriately, and by this means, he denied any chest pain, headache, or pain elsewhere.

Physical examination revealed a small abrasion on the bridge of his nose. The patient had regular tachycardia without murmurs. Lungs were clear; no wheezing or rales were noted. Abdomen was soft. Extremities were warm; no cyanosis or bruising was noted. Pulses were equal in all extremities. There was no focal weakness.

A repeated blood glucose measurement revealed a level of 143 mg/dL. Cardiac enzyme levels were normal. The ECG is shown in the Figure. 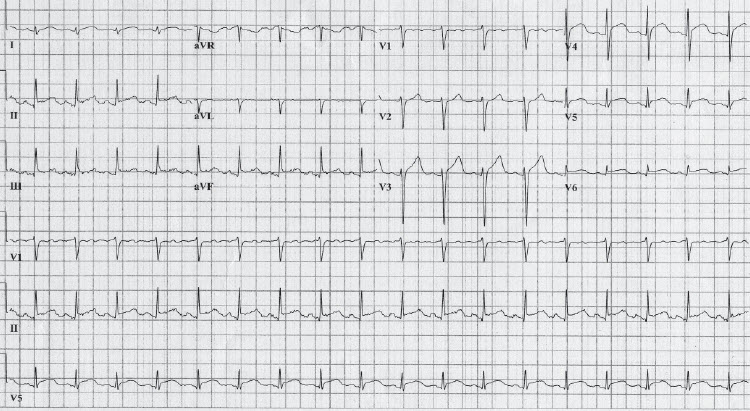 The patient was given aspirin and metoprolol. As he became more aware, he continued to deny any pain. A chest radiograph showed no infiltrate. Because of his slow return to baseline mental status, the patient underwent CT of the head, which demonstrated diffuse hyperdensity of the basal cisterns; this finding was consistent with an acute subarachnoid hemorrhage (SAH).

SUBARACHNOID HEMORRHAGE: AN OVERVIEW
About 30,000 cases of SAH occur each year in the United States. The peak incidence is in the 6th decade of life, and there is a 3:2 female predominance. Risk factors include hypertension, tobacco use, a first-degree relative with a history of SAH, and certain connective tissue disorders. Ten percent of all patients with aneurysmal SAH die before reaching the hospital. Of the remaining patients, 25% die in the next 2 weeks, and a significant percentage of survivors have neurological impairment.1

NEUROCARDIOLOGICAL MANIFESTATIONS OF SUBARACHNOID HEMORRHAGE
Of the multitude of compounding problems associated with SAH, one of the most interesting is the neurocardiological manifestations of the disease. About 50% of all patients with SAH have ECG abnormalities, ranging from T-wave inversions to ST-segment elevations to ventricular arrhythmias.1,2 The ventricular arrhythmias are considered a possible mechanism of sudden death in these patients.1

The pathophysiology of the neurocardiological manifestations of SAH is becoming better understood, but it has not been completely elucidated. Animal studies as well as autopsy reports show the histological changes of subendocardial myofibrillar degeneration. The necrosis, however, is not consistent with the coagulation necrosis of coronary ischemia but is more consistent with apoptosis, or programmed cell death. Studies have shown that this is indistinguishable from catecholamine-induced cellular damage. Animal studies have demonstrated that similar results occur in the absence of functioning adrenal glands, making direct stimulation a more likely cause of the ischemia.3

Clinically, patients may have ventricular arrhythmias, congestive heart failure, and pulmonary edema.4 Echocardiography may show evidence of heart failure, left ventricular dysfunction, and several other abnormalities that are potentially completely reversible. Elevated troponin levels in patients with SAH are associated with an overall increase in mortality.4 There is no specific treatment for the ECG manifestations of SAH. If life-threatening arrhythmias occur, follow the established advanced cardiac life support protocols.

HOSPITAL COURSE AND OUTCOME OF THIS CASE
Cardiology and neurology consultations were obtained. An echocardiogram showed globally abnormal left ventricular function and early apical ballooning syndrome, or takotsubo phenomenon (resembling a Japanese octopus trapping pot), with an ejection fraction of 25%. The ECG and echocardiographic findings were interpreted as consistent with the neurocardiological manifestations of SAH. A CT angiogram demonstrated a ruptured anterior communicating aneurysm without evidence of vasospasm. The patient was then transferred to a neuro interventional facility for further management. He has since recovered and follows up with his infectious disease consultants regularly.