Bruising in a Teenage Girl: A Manifestation of Dermatitis Artefacta

A 13-year-old girl with intermittent episodes of bruising was referred to our hematology clinic after several visits to her private physician. The bruises appeared suddenly on her extremities, face, and chin after little or no trauma. The patient had no history of ecchymoses, petechiae, hemoptysis, hematuria, epistaxis, or excessive bleeding. She was not taking any medications. The violaceous facial lesion shown in Figure 1 appeared a day after the patient received several stitches for a chin laceration; she had no other history of trauma. Weeks later, she presented with an area of bluish discoloration of about 9 3 1.5 cm on the medial aspect of her right knee (Figure 2). 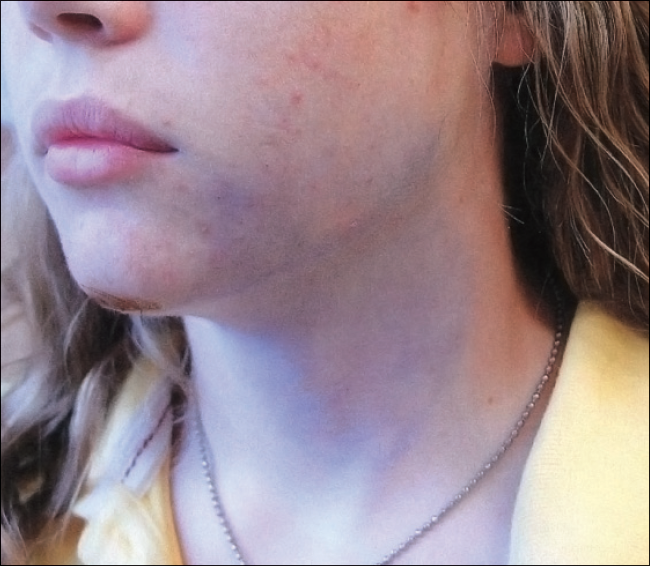 Figure 1. This violaceous lesion on the face of a 13-year-old girl is one of several episodes of bruising that led to hematology referral and diagnosis of dermatitis artefacta. 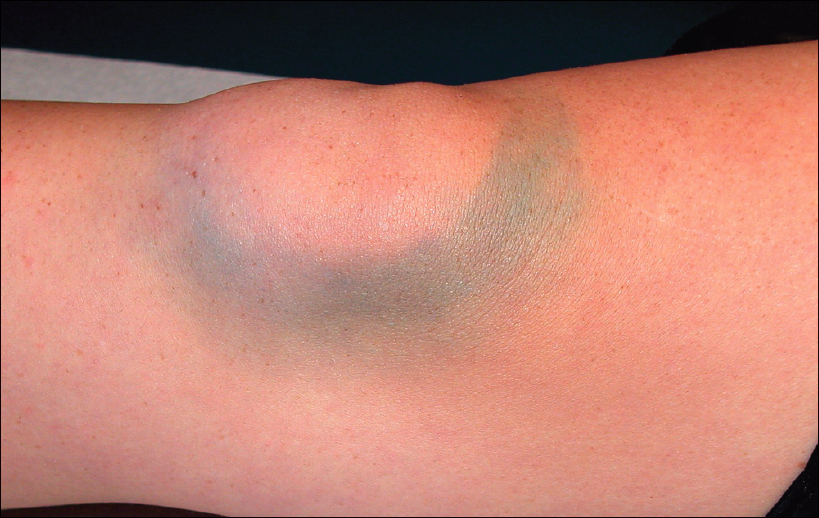 Figure 2. The bluish discoloration on the medial aspect of the right knee is another bruise fabricated by the patient.

On examination, the patient complained of mild tenderness on palpation of the right knee; however, she had no swelling of the joint capsule and full range of motion. The left knee was unremarkable. Examination of the skin revealed the lesions on the face and knee (as shown in the Figures) and no other signs of petechiae or ecchymosis.

However, when the patient requested a copy of her medical chart, a large bruise was noted on her left wrist. She complained of wrist pain and resisted examination. After cleans-ing the left wrist with an adhesive removal pad for better inspection, the blue pigments dissolved and the underlying skin was normal.

This teenage girl displayed sufficient artistic skill to convince her mother and physician that her bruises were authentic. Follow-up examination by the hematologist in the clinic revealed atypical physical findings and an unusual affect. The mother was told the diagnosis separately in another room and offered psychological referral for her daughter. The mother refused to believe the diagnosis; however, she allowed us to discuss psychological evaluation and assistance with her daughter.

EVALUATION OF PURPURA, BRUISES, AND PETECHIAE
Bruising is the escape of blood from damaged blood vessels to the surrounding subcutaneous tissue.1 Differentiating normal bruising from a bleeding disorder associated with bruising is not an easy task. Children with a severe bleeding disorder, such as hemophilia, usually present in the first year of life. Children with less severe disorders usually present at a later age.2

Usual sites for normal bruises include the areas over bony prominences. Abnormal bruising can include areas on the back, abdomen, chest, and buttocks. In the evaluation of bruises, the possibility of childhood nonaccidental trauma is always a concern.1 Abnormal bruising in children can point to a bleeding disorder or nonaccidental trauma.1 Always consider sexual abuse in patients with numerous bruises, scratches, or other evidence of physical struggle. Some abused patients may try to clear away skin layers in an attempt to get rid of the marks left by their attackers.3

History. Careful review of the medical history and family history is the first step in the assessment of a patient with suspected bleeding. Potential signs of a bleeding disorder include:

Laboratory evaluation. The laboratory assessment of bleeding should include a complete blood cell count with evaluation of the peripheral smear. In patients with a bleeding disorder, activated partial thromboplastin time and prothrombin time should be evaluated and can point to further testing that may be needed. Because of the low sensitivity and specificity of the bleeding time, it is not advised to order this test in children. Platelet function analyzers are more often used to evaluate platelet function.1,2

FACTITIOUS DISORDER
Factitious disorder involves the fabrication or simulation of physical signs and symptoms, with little or no apparent reason to feign illness.4 Patients seek the sick role to obtain socially sanctioned approval and relief from social demands; however, when exposed and questioned, they are usually unaware of their motivation.5 Manifestations of factitious disorder are diverse and depend on the medical acumen, imagination, and pain tolerance of the patient; they include feigning fevers, spiking clinical samples with blood, interfering with wound healing; and injecting infectious materials.6

Factitious disorders in children and adolescents are well documented. They have been reported in most medical specialties, particularly internal medicine, dermatology,
neurology, and surgery.7 Patients with factitious disorder typically display an attitude of complacence and are described as blank, flat, and
indifferent.8

Dermatitis artefacta. Patients with dermatitis artefacta create skin lesions in an attempt to garner attention and care. Lesions typically appear mysteriously, fully formed at accessible locations on the body, and patients strenuously deny complicity in their causation.9 Dermatitis artefacta is far more common in females than in males; the highest incidence occurs in women in their twenties.9,10 It is a disorder of body image and is associated with eating disorders and borderline personality disorder.9,11 The incidence of factitious disorder with mostly physical signs, such as self-induced bruising, acid and base burns, nail damage, blisters, and ligature damage, has been estimated to account for between 0.05% and 0.5% of dermatological cases in published studies.10

Reich and Gottfried6 described a 16-year-old girl who induced bruises in an attempt to simulate a case of blood dyscrasia. Another study described 4 young patients who
applied paint or pigments to create erythematous lesions.12

Munchausen syndrome. This is an extreme variant of factitious disorder in which patients create symptoms and willingly undergo diagnostic tests, hospitalizations, and medical treatments.4,6,8 This syndrome usually involves a male patient with a long pattern of sociopathic behavior, characterized by multiple dramatic presentations to various hospitals to which he provided fake names.4,6 The patient will usually discharge himself irrespective of whether he was discovered.4

Malingering. In contrast to those with Munchausen syndrome, malingerers are motivated by compensation in the form of litigation rewards, narcotic medications, or relief from a bad situation. Malingerers relinquish the sick role once they attain their reward or relief.5

TREATMENT OF FACTITIOUS DISORDER
Confrontation of patients with factitious disorder needs to be sympathetic and nonpunitive. Creating an environment that is both safe and accepting, that maintains frequent, short appointments, can establish trust between the health care provider and family. An environment that allows the patient to “save face” and avoid humiliation can also help.8 A challenging confrontation is counterproductive and will ultimately force the patient to seek other physicians.8,10 A direct, nonthreatening discussion can yield a more positive recognition of the feigned symptoms.8

The prognosis for cure is poor.8 In up to 30% of patients, symptoms tend to wax and wane and appear in close relation to stressful circumstances in their lives.9 Including a psychologist or psychiatrist in the treatment team can help. In patients with borderline personality disorders, the use of serotonin reuptake inhibitors may be helpful. One promising therapeutic approach seems to be inpatient psychoanalysis, which removes the patient from his or her stressful environment.10

OUTCOME OF THIS CASE
Recognition of factitious disorder in this patient forestalled expensive travel to a tertiary center and further expense from unnecessary medical visits. Harsh confrontation was avoided by discussing the condition first with the mother in a separate room and then discussing the available counseling options with the daughter. She has not returned with inappropriate or simulated medical complaints.