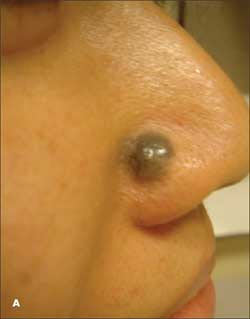 Blue nevi are a manifestation of dermal melanocytosis.1 They consist of blue, gray-blue (A), or brown-blue papules (B) that occur most commonly on the head and neck. The blue pigmentation is attributable to the depth of melanin in the dermis and the Tyndall effect (the preferential absorption of long light wavelengths by melanin and the scattering of shorter wavelengths, representing the blue end of the spectrum, by collagen bundles). 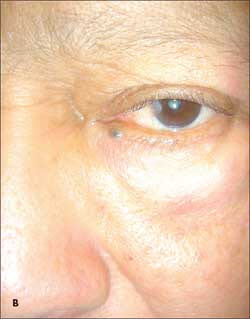 Blue nevi are most frequently seen in Asian adults, in whom the prevalence is estimated to be 3% to 5%. They are found in 1% to 2% of white adults and rarely in blacks. They develop most commonly in younger persons but can appear in old age. Although blue nevi are benign, they are sometimes mistaken for melanomas, especially in elderly persons. Melanomas occasionally develop in association with blue nevi. This phenomenon is usually portended by rapid growth and, occasionally, ulceration of the nevus. In elderly persons, blue nevi that look irregular are best removed.