Bioterrorism Preparedness: Would You Be Ready?

A premeditated biologic attack against a civilian population is now a real threat. Several naturally occurring infectious agents and their products (for example, purified toxins) are among the candidates that have been and would be used in such a scenario. Familiarity with these agents and their associated diseases may help you recognize the possibility of a deliberate attack and manage the consequences.

Until recently, the specter of biologic warfare or bioterrorism was infrequently discussed by most physicians, despite the attention it had received from novelists, screenplay writers, politicians, and military defense strategists. Thankfully, most physicians have still never encountered the malevolent use of biologic agents, nor have they treated a victim of a biologic attack. In fact, despite their occasional occurrence in a 'natural setting,' as well as in recent events, clinical cases involving any of the classic biothreat agents are rarely encountered even by most infectious disease physicians. For these and many other reasons, the intentional use of biologic agents has represented an exceedingly unlikely hypothetical scenario for most clinicians. Yet, evidence mounts that the use of biologic agents as weapons is increasingly feasible and plausible in a civilian population setting.

The events of September to October 2001 involving the deliberate delivery of anthrax spores through the US postal system provide an introduction to the issues and potential scenarios that can arise from the intentional use of biologic agents as weapons or as tools of fear. And nearly all predicted scenarios of intentional biothreat agent use place physicians at the leading edge of exposure and management. Despite international bans such as the 1972 Biological and Toxin Weapons Convention, signed by more than 140 countries, including the United States1and heightened defensive planning on the part of the US military, the facts remain that lethal and highly noxious biologic agents are relatively inexpensive.

They are also easy to obtain (with more than 400 strain repositories around the world, in addition to clinical microbiology laboratories), easy to produce (most undergraduate, graduate, and postdoctoral students in microbiology and related fields have the necessary background), easy to conceal, and are becoming increasingly easy to deliver. Arguments have been made that biologic agents are the weaponry of the future; they represent the 'poor man's atomic bomb.' While the goal in statesponsored warfare may be to kill substantial numbers of people, a terrorist organization or individual may employ biologic agents for less 'ambitious' reasons: to incapacitate local populations, to cause social or political disruption, or simply to generate fear and mistrust. Although the concept is loathsome, the threat is nevertheless a real one.2 In this and in coming issues of Consultant, we will examine some commonly acknowledged agents of biologic warfare.

These include smallpox, plague, tularemia, staphylococcal enterotoxin B, and ricin. Throughout the series, our focus will be on naturally occurring agents that may cause unusual syndromes when employed intentionally and on agents with which clinicians may be unfamiliar. Because a review on anthrax appeared in last month's issue of Consultant (December 2001, page 1797),3we will not address it here. Our goal with this series is to address the needs of health care practitioners as they are forced to confront this problem and to suggest that the topic of biologic warfare and bioterrorism requires their involvement. We will begin with an overview of biologic weapons and associated disease. In the accompanying 'Primary Care Updates,' we will present brief overviews of the plague and tularemia, respectively.

NEXT: WHY THE CONCERN?

WHY THE CONCERN?
Continuing political and military instability focuses sharp attention on the known capabilities and assets of nations such as North Korea, Syria, Iraq, and Iran. Iraq, for example, admitted to the development of nearly 400 missile warheads, bombs, and rockets armed with botulinum toxin, anthrax, and aflatoxin, which were released for use by forward-deployed commanders during the 1990-1991 Persian Gulf War. The fate and whereabouts of these weapons and even larger stockpiles of weaponized agents remain uncertain.

Certainly, the combination of an unstable and despotic Iraqi leadership with ties to well-organized terrorist organizations, and recurrent Iraqi military humiliation by the United States increases the level of concern, as do recent political developments in the wake of the events of September 11, 2001. Of even more concern is the recently publicized history of massive biologic weapons development in Russia beginning in the early 1970s and continuing into the 1990s. The agents purportedly stockpiled included Bacillus anthracis; variola virus (smallpox); various viral hemorrhagic fever agents; and a variety of nontraditional agents, including biologic response modifiers.

The disintegration of the Russian state infrastructure may have led to the defection of key personnel to hostile nations and organizations. Japan's Aum Shinrikyo cult reminds us of the potential capabilities of organizations devoted to non'statesponsored biologic and chemical terrorism. The Aum cult produced botulinum toxin, B anthracis spores, and Coxiella burnetii, in addition to the nerve gas sarin and a wide array of other biologic and chemical weaponry. 4,5 This cult visited Zaire during the 1992 Ebola fever outbreak, in an attempt to obtain Ebola virus samples for cultivation and weapon development. The cult's terrorist activities caused the deaths of 12 people from sarin gas exposure; anthrax was also used, but unsuccessfully.

Closer to home, in 1984, the devotees of Bhagwan Shree Rajneesh infected 751 people in Oregon with Salmonella typhimurium by intentionally contaminating local self-service salad bars.6 In 1996, a disgruntled hospital microbiology laboratory technician in Dallas intentionally infected 12 coworkers with Shigella dysenteriae.7 The deliberate distribution of B anthracis spores through the US mail system in 2001 and associated cases of anthrax highlight the vulnerability of modern society and the difficulties in defining the origins and scope of the act. In fact, the history of the intentional use of noxious biologic agents stretches back to antiquity. Table 1 highlights some events in the modern history of documented use of biologic weapons.4,8 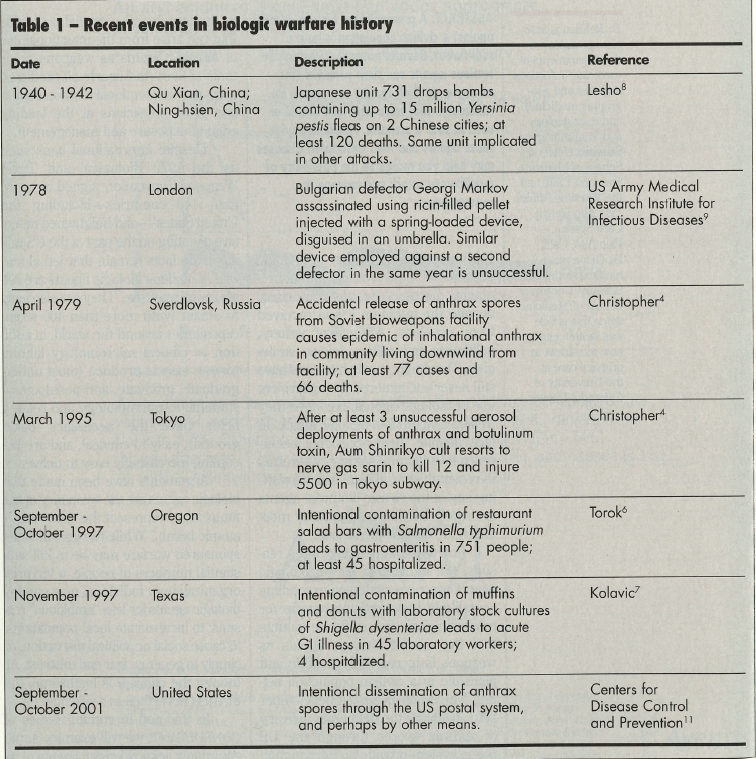 Small-scale terrorist attacks are more difficult to predict and detect. Such attacks may only be recognized well into the course of the epidemic, and perhaps long after the resolution of all clinical cases. Some of the potential agents (mentioned above) cause naturally occurring disease with some regularity. It is possible that other bioterrorist events in this country have gone unrecognized. Because these events are usually unannounced and because of the prolonged and variable incubation period of most biologic agents, it is likely that emergency department staff and physicians will be among the first to encounter and treat the victims. We clinicians need to heighten our awareness of irregular disease patterns and features and question the mechanism of disease emergence.

NEXT: BIOLOGIC WEAPONS AND ASSOCIATED DISEASE

BIOLOGIC WEAPONS AND ASSOCIATED DISEASE
Some commonly acknowledged agents of biologic warfare, including intact microorganisms as well as purified toxins, are listed in Table 2. This list is by no means complete, nor does it include nontraditional agents such as genetically engineered organisms, their products, or other biologically active molecules. Few randomized, blinded studies have been performed on which to base recommendations for treatment and prophylaxis of diseases caused by naturally occurring agents that are intentionally employed. 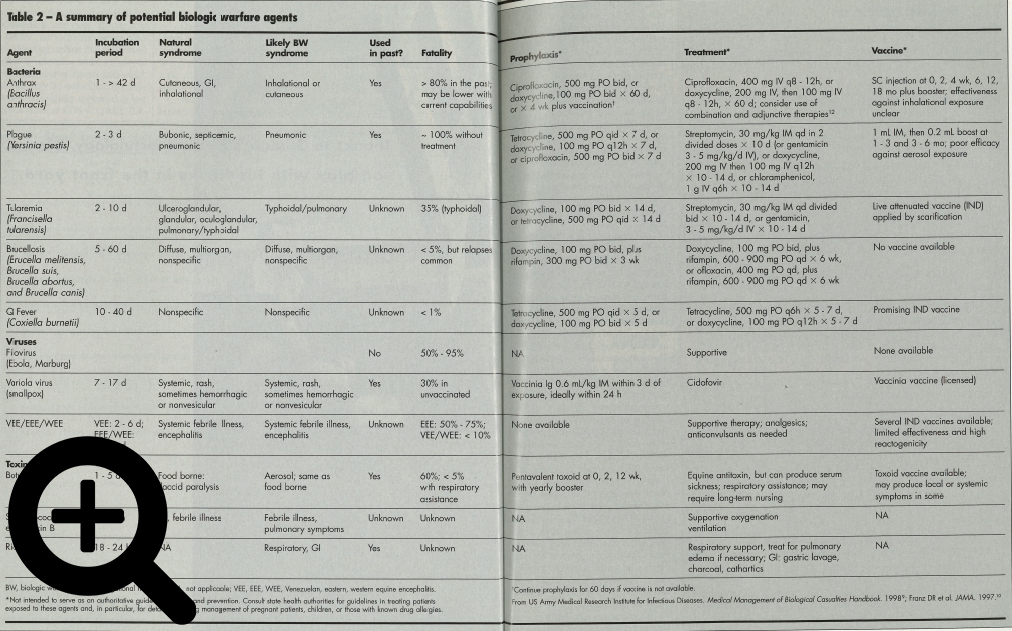 This point has been emphasized repeatedly during the 2001 US anthrax bioterrorist events. For detailed information, readers should consult references 9 and 10 and their state health departments.9,10 (Contact information for your state health department appears on page 1809 of the December 2001 issue of Consultant.) The box below lists a series of Internet sites that offer valuable information about biologic warfare. 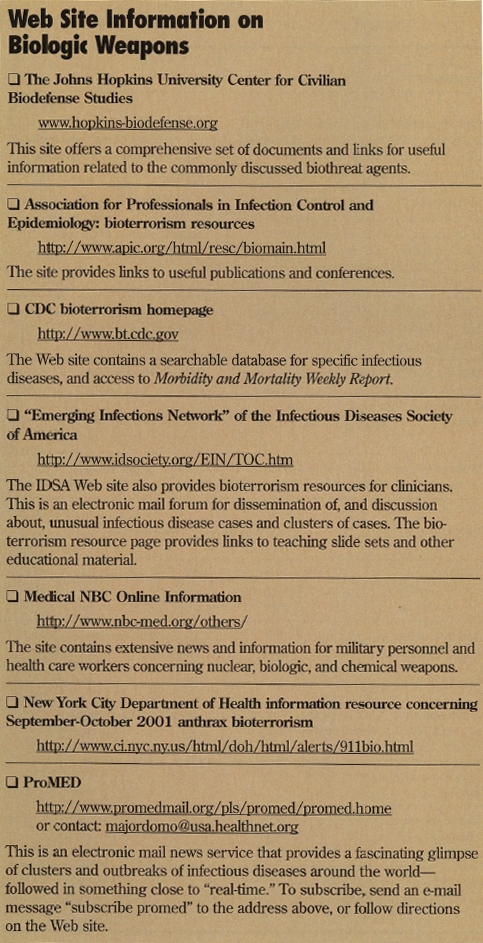