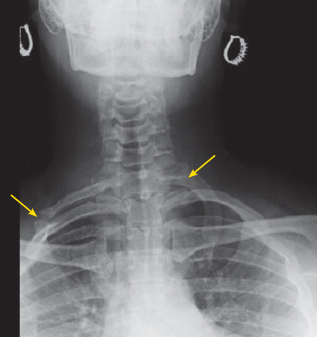 On the right side of a 36-year-old woman’s neck was a firm, moderately painful mass. When she rotated her head to the right, the pain worsened. The mass had been present for several years, but it had not bothered the patient until recently. She denied any numbness or weakness in her upper limbs. There was no history of trauma, weight loss, night sweats, fever, or chills.

Physical examination revealed an asymmetric, slightly tender, and hard 2-cm mass in the right supraclavicular area. There was no palpable thyroid mass. She had decreased range of motion because of the pain. An examination of the ears, nose, mouth, and throat, as well as the upper extremities (including neurologic and vascular systems), was unremarkable. There was no lymphadenopathy in the patient’s neck.

Chest films revealed bilateral asymmetric ribs arising from the seventh cervical vertebra with pseudoarthrosis between the right cervical rib and the first thoracic rib. CT scans of the neck and chest confirmed the radiographic findings and also revealed moderate degenerative changes and some spurring at this unusual articulation.

A cervical rib is a supernumerary rib that arises from the seventh cervical vertebra. It is symptomatic in only 10% of affected patients when it causes compression of the neurovascular bundle at the thoracic outlet.1 Cervical ribs are more common in females than in males. In about 90% of cases, they are asymptomatic; however, they can cause neurological or vascular symptoms and can
be difficult to diagnose.2 This anomaly may vary from full size to just a riblet3 and may present as just an asymmetric and benign hard neck lump. However, thorough investigations are important to rule out a sinister pathology. When a cervical rib or ribs are suspected, oblique chest radiographs and CT scans may demonstrate the anatomical detail of this anomaly.

Both surgical and medical options were given to our patient. She chose medical treatment, and ibuprofen was prescribed for symptomatic relief. At a 6-month follow-up, she still had mild pain at the pseudoarthrosis site, which was controlled with ibuprofen.