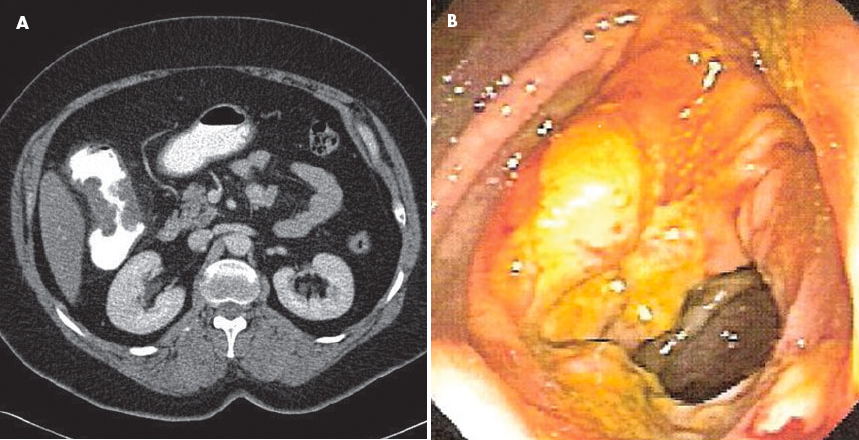 A 48-year-old woman was hospitalized for acuteonset abdominal pain. She had a history of adult-onset Still disease and severe osteoarthritis. She had been taking 650 mg of aspirin every 4 hours to relieve her arthritis pain and fevers.

The patient had tenderness in the right upper quadrant, without signs of peritonism. A CT scan with contrast of the abdomen and pelvis demonstrated an apple core lesion (A). Colonoscopy revealed an ulcerated mass in the ascending colon, which strongly suggested malignancy (B). However, a biopsy specimen of the lesion showed only inflammatory changes with areas of ulceration (C).

At our advice, the patient—who was taking 16 medications in total— discontinued aspirin therapy. Thereafter, the patient’s health improved and a diagnosis of NSAID-induced colitis was made. CT (D) and colonoscopy (E) done 6 months later showed complete resolution of the lesion. Our patient is currently controlling her arthritic joint pain with acetaminophen. 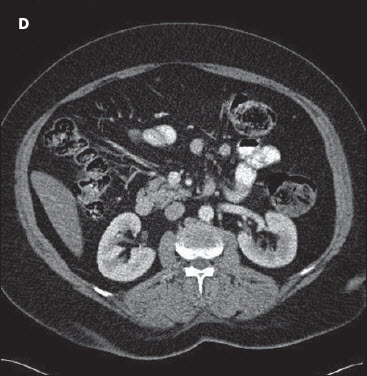 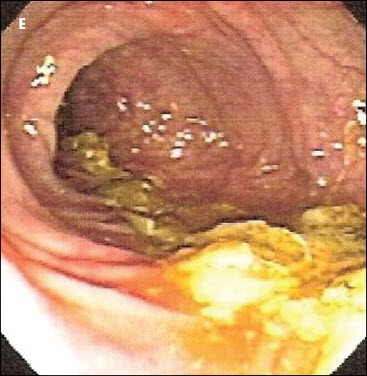 The radiological hallmarks of the classic colonic apple core lesion are short, sharply defined regions of annular colonic narrowing with overhanging margins; ulcerated mucosa; and eccentric, irregular lumen. An apple core lesion can have a number of causes, the most serious being malignant neoplasm. The differential diagnosis for colitis is wide and includes inflammatory bowel disease (Crohn disease and ulcerative colitis); diverticulitis; and infective, microscopic, and drug-related colitis.

It is becoming increasingly clear that NSAIDs, including salicylates, may adversely affect the colon as well as the upper GI tract.1,2 They may cause nonspecific colitis or exacerbate a preexisting colonic disease. Presenting features include abdominal pain, weight loss, diarrhea (bloody or nonbloody), and iron deficiency anemia. Colonoscopy may show inflammation, ulceration, or stricture. Histology often shows a nonspecific colitis or pattern similar to that of ischemic colitis.3

The pathogenesis of NSAID-induced colitis is controversial. Local and/or systemic effects of NSAIDs on mucosal cells might lead to an increased intestinal permeability, a prerequisite for colitis.4 NSAIDinduced colitis is treated by discontinuation of the offending medication if possible and therapy with either sulfasalazine5 or metronidazole.6 Surgery is often indicated in cases of life-threatening complications or intractable symptoms.7