ABSTRACT: The initial assessment of a patient who presents with anxiety symptoms in a primary care setting usually focuses on ruling out medical causes, especially the numerous drugs—such as stimulants, sympathomimetics, antihypertensives, and NSAIDs—that can cause anxiety. The selection of initial laboratory tests depends on the presence of abnormal physical findings; imaging studies would be indicated whenever specific medical disorders need to be excluded. Also assess the patient for other psychiatric disorders that may be associated with anxiety symptoms; these include adjustment disorders, mood disorders (depression or bipolar disorder), alcohol and other substance abuse disorders, and depressive symptoms, which often coexist with anxiety symptoms. The primary anxiety disorders most commonly seen in the primary care setting include generalized anxiety disorder, agoraphobia, panic disorder, specific phobias, social phobia (social anxiety disorder), obsessive-compulsive disorder, acute stress disorder, and posttraumatic stress disorder.

Anxiety disorders are as prevalent and disabling as depression; they affect about 19.1 million adults in the United States at some point during their lifetimes.1-3 Because of the high suicide risk associated with depression, patients who have anxiety may attract less attention from their primary care providers. Thus, anxiety disorders often go undiagnosed and untreated.

At least 60% of patients with symptoms of anxiety disorders seek treatment in a primary care setting. These symptoms need to be distinguished from normal anxiety and fear, which are healthy emotional reactions to daily stressors related to interpersonal, social, educational, and vocational demands. Patients who present with anxiety symptoms that occur in the absence of an identified cause or stressor and that have lasted for an extended period of time and are accompanied by a deterioration of overall functioning probably have an anxiety disorder that warrants treatment.3,4

In this 2-part series, I review the diagnosis and treatment of anxiety disorders in the primary care setting. Here I discuss the clinical presentation, the relevant diagnostic studies, and the differential diagnosis. In Part 2, I will summarize the available treatment options.

Risk factors. Among the risk factors for anxiety disorders are the following5:

Psychological and social manifestations of anxiety. These may include jitteriness, tension, unrealistic or excessive worry, exaggerated startle reactions, and ritualistic behaviors. Some patients with anxiety disorders may fear being away from home, and they may stop going to work or attending public gatherings.6 Some may also demonstrate an irrational fear of strangers; others may be afraid of falling asleep because of recurrent disturbing dreams or nightmares. In addition, persons with anxiety disorders are often apprehensive and worry that something bad may happen to themselves or to their loved ones. They often feel impatient, irritable, and easily distracted. 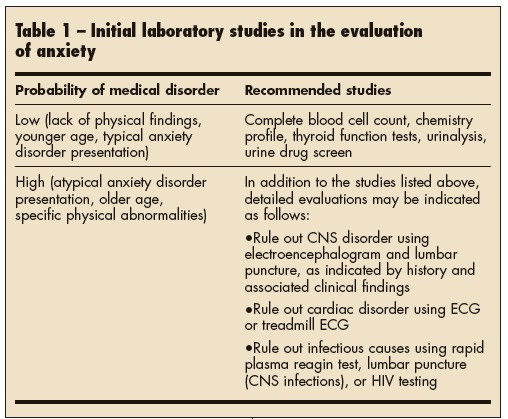 The baseline examination for anxiety of new onset includes a detailed physical and psychosocial symptom profile that encompasses the following7:

The selection of initial laboratory tests depends on the presence of abnormal physical findings.8 Guidelines for ordering tests and studies are outlined in Table 1. Imaging studies are not initially indicated in the diagnosis of primary anxiety disorders unless specific medical conditions need to be ruled out. If intracranial pathology is suspected, a head CT scan or MRI scan may be required. 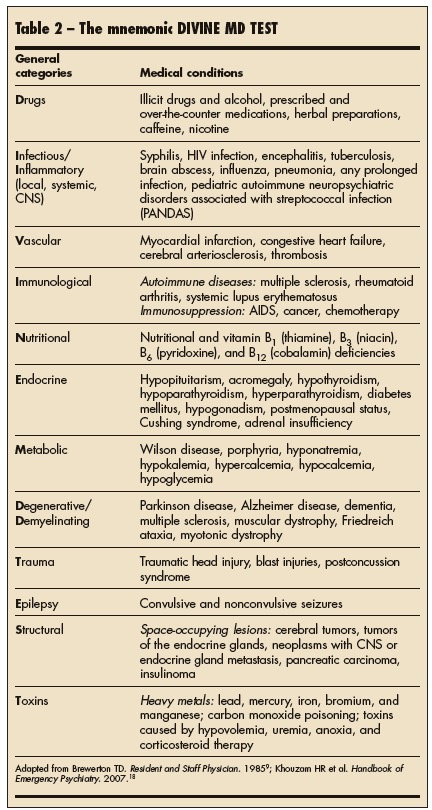 The list of drugs suspected of causing anxiety is extensive.10 Drugs commonly associated with anxiety include stimulants such as amphetamine, cocaine, methamphetamine, and caffeine. Drugs such as lysergic acid diethylamide (LSD) and 3,4-methylenedioxymethamphetamine (MDMA, or “ecstasy”) can also cause acute and chronic anxiety. Prescription medications to consider include sympathomimetics, antihypertensives, and NSAIDs.10

It is of paramount importance to establish a causal relationship between the onset of anxiety symptoms and the timing of intake of prescribed medications before any medication is discontinued. The dosage of the suspected medication may be gradually tapered and withdrawn and the patient monitored for a correlation between relief of symptoms and washout (about 5 half-lives) to confirm or refute the diagnosis. For an accurate assessment of anxiety symptoms in patients who use illicit drugs, a period of 4 to 6 weeks of total abstinence is required.

Psychiatric conditions associated with anxiety. Anxiety symptoms may be secondary to other psychiatric disorders, including11:

Depressive disorders and anxiety disorders often coexist; however, this combination is not well recognized despite its significant impact on increasing disability and disruption of normal functioning. When these primary psychiatric conditions are untreated, the associated secondary anxiety symptoms may progress and lead to a more severe anxiety disorder. It is also common for an anxiety disorder to accompany another anxiety disorder, an eating disorder, or a substance abuse disorder, especially alcohol dependence.

Generalized anxiety disorder. Patients who have generalized anxiety disorder experience chronic excessive nervousness, exaggerated worry, tension, and irritability that appear to have no cause or are more intense than the situation warrants.11 Their worries are often related to their perceived inability to perform with punctuality and competence in various settings and circumstances. Over the course of the disorder, physical signs—such as restlessness, difficulty in falling or remaining asleep, headaches, trembling, twitching, muscle tension, or sweating— often develop, which lead to further worries. Patients with generalized anxiety disorder may also have other anxiety and mood disorders.7

Agoraphobia. The term “agoraphobia,” which originally came from the Greek language to describe “fear of the marketplace,” became generalized to describe fear of any open or public space. The condition can be quite disabling. Patients with agoraphobia fear being in a situation in which they experience anxiety or panic and from which escape might be difficult or embarrassing. As a result, they avoid those situations that cause anxiety or panic. It is the fear of the anxiety that leads to agoraphobia. Agoraphobia can be accompanied by panic disorder and panic attacks, or it can occur alone without a history of panic attacks.1,11

Panic disorder. Patients with panic disorder usually describe periods of intense fear or discomfort that they call panic attacks.1,7,12 Very often, they seek medical treatment because they fear that their physical symptoms—which may include chest pain, dizziness, nausea, chills, trembling, and palpitations—are caused by a heart attack.

Patients may worry about recurrent and often unexpected panic attacks. The anticipatory anxiety and intense fear of future attacks may lead to the development of phobic avoidance. The combination of panic symptoms and the phobic avoidance can impair the patient’s professional, social, and familial functioning.1,7,13

Specific phobias. Phobias are manifested by irrational fears when a person is exposed to or is in close physical contact with specific objects or situations that trigger intense anxiety.11,13 The intense anxiety can also be triggered when the person sees or hears the name of the object, or sees pictures of the object. Phobic avoidance develops, and the patient will altogether avoid all the specific things or situations that trigger the intense anxiety. The avoidance leads to an ongoing impairment in the patient’s ability to function in settings where exposure to the specific object occurs.1,14

Social phobia (social anxiety disorder). Social phobia is manifested by excessive, persistent fear of social and performance situations that is so severe that it disrupts daily life and relationships.11,15 Persons with social anxiety have a persistent, intense, and ongoing fear of being extremely embarrassed or being watched, judged by others, or humiliated by their own actions.14,15 The most common social phobia is fear of public speaking.15

Obsessive-compulsive disorder. Patients with obsessive-compulsive disorder experience repetitive ideas (obsessions) that are distressing and provoke intense symptoms of anxiety. To counteract the anxiety, patients use certain sets of actions, or rituals, and repetitive behaviors (compulsions).11 The repetitive behaviors diminish the anxiety temporarily, only to have it return within a relatively short period of time. As a result, patients often continue the compulsive behaviors, which consume most of their time, or they avoid situations with which the obsessions are associated, thus constricting their activities and range of behaviors.1,11

Patients with obsessive-compulsive disorder may have only obsessions or only compulsions or both obsessions and compulsions.11 They most often experience obsessions that they must avoid contamination, that actions or items need to be checked for completion, or that they must engage in certain detailed and elaborate activities to prevent future harm to oneself or others. Repetitive, intrusive thoughts or images about violence or sexual actions, or urges to engage in violence or sexual actions are also common.

Despite patients’ awareness of the irrational nature of their condition, they feel unable to control their obsessions or to prevent their compulsions.7,16 The disorder hinders mental, social, and academic performance; if untreated, it may lead to permanent disability because of the loss of meaningful interpersonal relations and employment.16

The condition is usually associated with dissociative symptoms, such as numbing, detachment, a reduction in awareness of the surroundings, derealization, or depersonalization; re-experiencing of the trauma; avoidance of associated stimuli; and significant anxiety, including irritability, poor concentration, difficulty in sleeping, and restlessness.11 The diagnosis of acute stress disorder is made when the symptoms occur within 4 weeks of the traumatic event and are present for a minimum of 2 days and a maximum of 4 weeks.11 The disorder may resolve with prompt intervention or with the passage of time; however, in some patients, acute stress disorder may progress into a more severe psychiatric condition, such as posttraumatic stress disorder.1,11

Posttraumatic stress disorder. This disorder develops after a person experiences, witnesses, or confronts a physically and/or psychologically distressing event. The event may involve actual or threatened death or serious injury or a threat to the physical integrity of oneself or others.11 Symptoms of posttraumatic stress disorder include re-experiencing the traumatic event, a consistent pattern of avoidance of themes associated with the traumatic event, and hyperarousal and autonomic hyperactivities that may be manifested by difficulties with sleep or concentration, exaggerated startle reactions and, at times, anger outbursts.11,17 The diagnosis is made if the symptoms have been present for at least 1 month and cause clinically significant distress or impairment in functioning.11,17 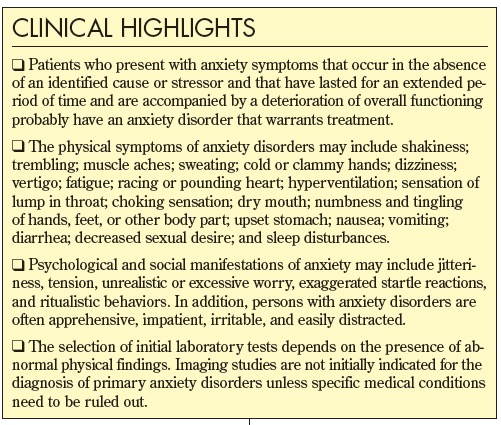