Lump in the breast of a 15-day-old boy

THE CASE: A 15-day-old boy is brought for evaluation after his mother noted a "lump" in his left breast that morning. There is no history of illness or trauma. The infant's appetite and activities are normal, and he has no constitutional symptoms. He was delivered vaginally at full term and did not require a prolonged nursery stay or antibiotic therapy. Results of standard maternal screens were negative.

On examination, the infant is afebrile and has normal vital signs. His left breast is erythematous, warm, tense, and tender. No fluctuance or pustules are noted, and no discharge can be expressed. The remainder of the examination results are unremarkable.

What is the most likely diagnosis?

DISCUSSION: This child has a breast abscess,a condition more common in neonates than in older children. Abscesses usually develop in full-term infants during the first 6 weeks of life; about 84% develop during the first 3 weeks. Boys and girls are equally affected initially; after 2 weeks, the incidence is higher in girls. This is probably a result of the physiologic breast enlargement that is more common in girls after the age of 2 weeks. Breast abscess rarely affects premature infants, because the breast tissue is underdeveloped.

Neonatal breast abscesses are usually caused by Staphylococcus aureus, but infections with group B streptococci, Escherichia coli, Salmonella, Proteus mirabilis, and Pseudomonas aeruginosa have been reported.

The clinical characteristics of breast abscess include breast enlargement and varying degrees of pain, erythema, firmness, and fluctuance. Bilateral breast abscesses occur in less than 5% of patients. In one half to two thirds of infants with breast abscesses caused by S aureus, the abscess is accompanied by cutaneous pustules. Generally, no constitutional symptoms are noted unless the process has extended into deeper tissues or the bloodstream. Only one third of affected infants present with fever. 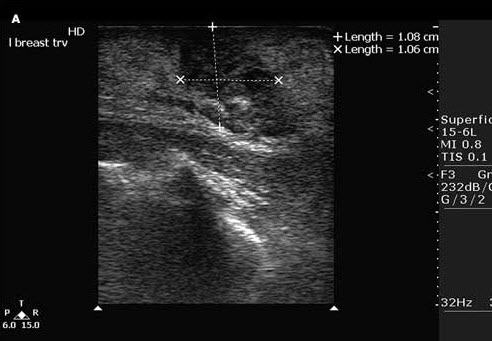 In infants with S aureus breast abscess, the nasal or pharyngeal mucous membranes are usually colonized. S aureus may spread from the nasopharynx to the skin of the nipple and move from there up the ducts of the physiologically enlarged breast to infect deeper tissues. Other sites that may be colonized are areas of intact skin, including the perineum, hands, and umbilicus.

In most cases, treatment involves incision, drainage, and parenteral antibiotic therapy. Once neonatal abscess is diagnosed, empiric therapy with clindamycin or vancomycin is initiated. Therapy is adjusted when the susceptibility of the organism has been determined.

This patient was admitted to the pediatric hospital. Intravenous vancomycin therapy was started, and the abscess was drained by needle-guided ultrasonography. The left pectoralis region was scanned with a linear high-frequency probe in transverse and sagittal orientations (A and B). A 1.08 x 1.06-cm hypoechoic spherical mass was noted below the left areola, with some hyperechoic debris posteriorly. The surrounding subcutaneous tissue appeared edematous.

Cultures of the abscess grew methicillin-resistant S aureus (MRSA). The infection resolved after a 21-day course of intravenous vancomycin. The patient was discharged home and recovered uneventfully.

MRSA infection has become epidemic. It is generally spread from one patient to another by health care workers whose hands or gloves have been contaminated by touching colonized or infected wounds or dressings or dry, intact but contaminated skin. Workers with persistent MRSA nasal colonization can spread the organism to their patients by direct contact via hand colonization or by airborne transmissions of droplets.

Although there have been no reports of MRSA neonatal breast abscesses, outbreaks of MRSA skin infection in healthy, full-term newborns in Chicago and Los Angeles have been described. In both cities, MRSA is thought to have been transmitted in the neonatal nursery, which is probably the source of our patient's infection. 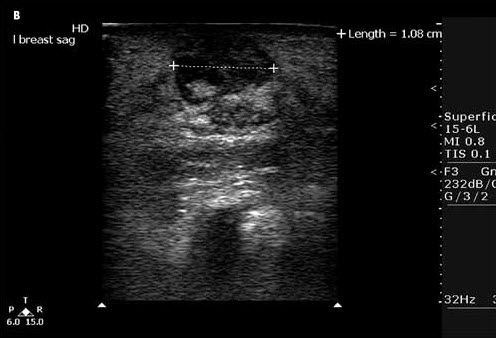 Cellulitis, a pyogenic infection of the dermis and subcutaneous tissue, most frequently affects the extremities as a complication of a wound, ulcer, or dermatosis. It is uncommon in neonates.Cellulitis is characterized by swelling, warmth, and tenderness and largely confluent macular erythema without defined borders. Tender regional lymphadenopathy and lymphangitis may also be present. Streptococci and S aureus are the most common culprit organisms. Neither blood cultures nor cultures of needle aspirates are indicated because bacteremia is uncommon. First-line therapy consists of ß-lactam antibiotics active against penicillinase- producing S aureus.

Breast abnormalities are common in neonates. Bilateral breast hypertrophy results from elevated estrogen levels in women during the last trimester of pregnancy. Breast hypertrophy is sometimes associated with galactorrhea ("witch's milk"). Parents or grandparents may squeeze the neonate's breast to express this milk, which can lead to mastitis, a staphylococcal infection that requires antibiotic therapy. It is prudent to counsel parents about neonatal breast hypertrophy and galactorrhea to prevent mastitis.