Disclaimer:
The views expressed in this article are those of the authors and do not necessarily reflect the official policy or position of the Department of the Navy, the Department of Defense, or the US Government.

A 23-year-old active-duty Navy helicopter mechanic presented to dermatology for evaluation of an irritated bump behind his left ear that had been present for 3 weeks. He denied pain, pruritus, or other symptoms associated with the lesion. He had experienced bleeding and enlargement of the lesion after trying to remove it himself. He had been seen 6 weeks prior by his independent duty corpsman for an enlarging subcutaneous nodule on his left upper eyelid, which later was identified as angiolymphoid hyperplasia with eosinophilia (ALHE).

At presentation, examination of the patient’s posterior auricular scalp demonstrated a pink, 7-mm, sessile papule with well-circumscribed borders and a central superficial scale (Figures). Histopathology test results demonstrated a vascular proliferation with an infiltrate composed of numerous eosinophils and lymphocytes. Enlarged endothelial cells protruding into the lumen were seen on several blood vessels. An immunohistochemical stain for human herpesvirus was negative, supporting the diagnosis of ALHE. 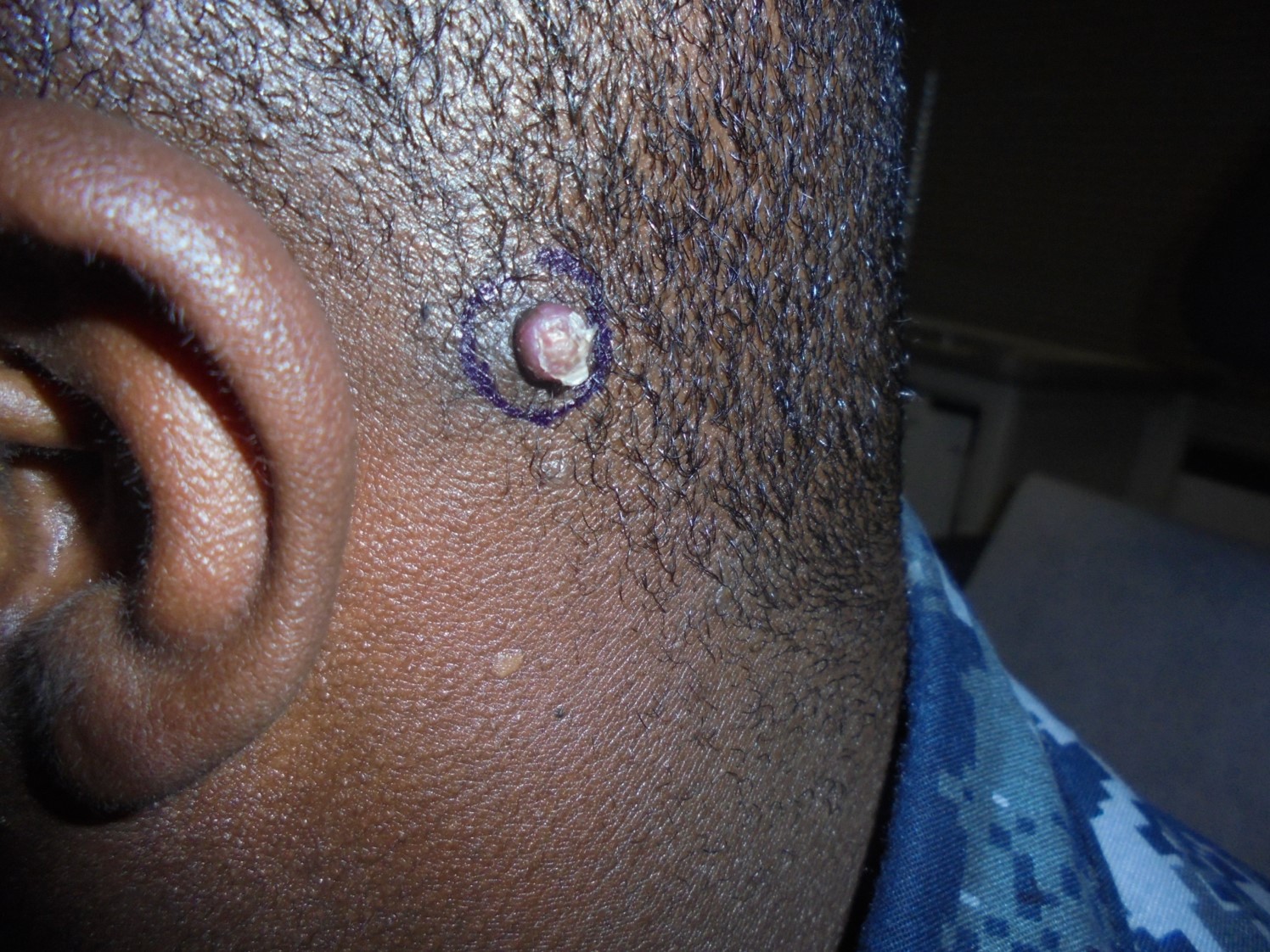 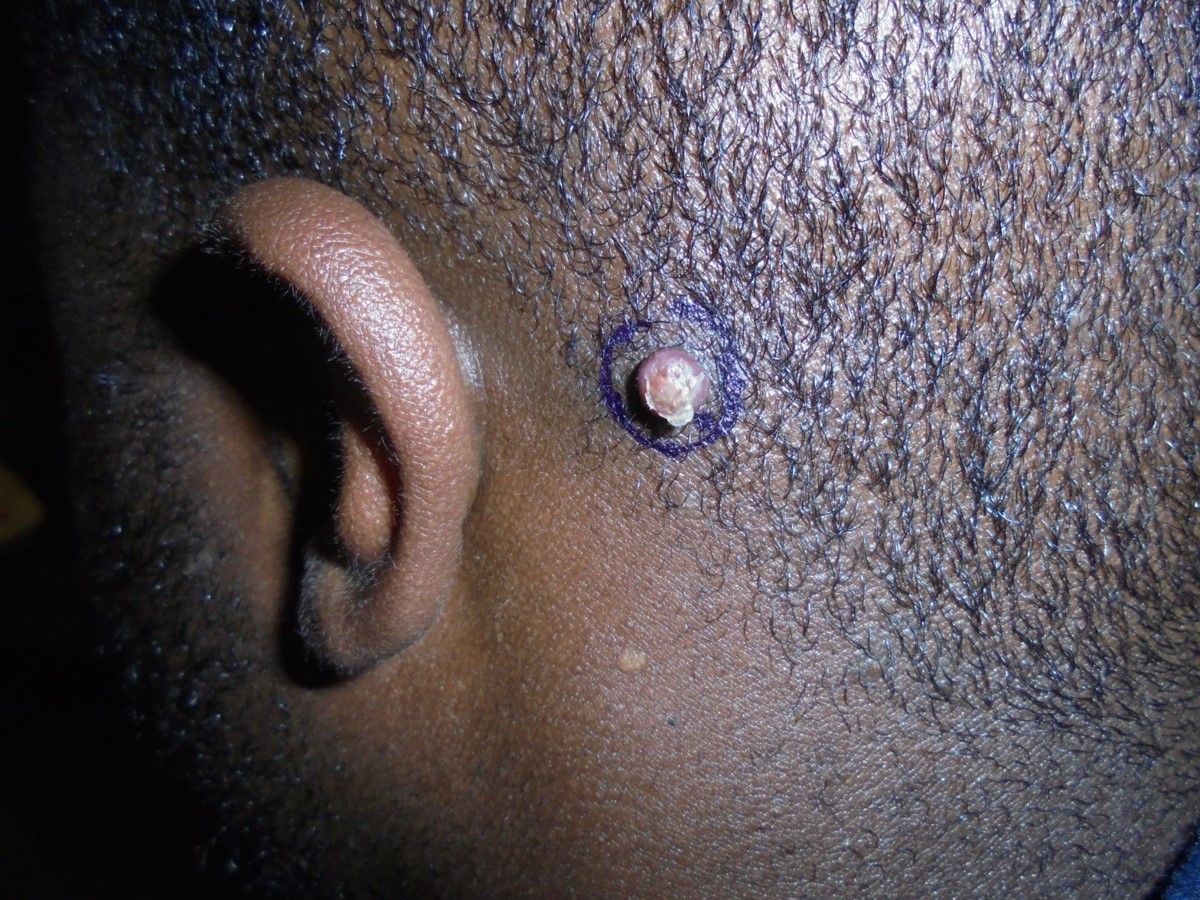 ALHE lesions are generally small and superficial and occur as one, few, or many.1-3 They more often occur in middle-aged women but have been identified across all demographics.4,5 Symptoms include pruritus, pulsation, and generous bleeding with excessive manipulation.2,5 Lesions favor the head and neck region, commonly in the posterior auricular distribution.4 On histology, they are noted to have prominent vascular proliferation with enlarged endothelial cells protruding into the vessel in a characteristic cobblestone pattern.3 Numerous eosinophils are also present throughout the stroma.4

The etiology of these lesions is controversial. The most widely accepted theory is that the tumors are reactive vascular hyperplasia in response to sundry stimuli, including trauma, infection, hormonal changes, or irritation.6,7 Overexpression of estrogen and progesterone receptors within lesions of pregnant women, as well as interleukin 5 (IL-5) and vascular endothelial growth factor, have been reported.7,8 In addition, ALHE has been found in zosteriform distribution and overlying arteriovenous shunts; however, a definitive cause-effect relationship between ALHE and vascular shunting would be exceedingly difficult to prove.9

A recent systematic review of the literature revealed an association between presence of multiple lesions and both pruritus and bleeding. And, contrary to earlier conclusions, there was no demonstrated association with pain.10

Kimura disease (KD) bears a strong resemblance to ALHE, with both conditions demonstrating eosinophils on histopathology.6 Like ALHE, KD favors the head and neck in distribution. KD is asymptomatic, whereas the lesions in ALHE are typically pruritic, painful, and pulsatile. KD lesions tend to be deeper and larger. They contain characteristic prominent lymphoid follicles with germinal centers. Moreover, KD is associated with lymph node involvement, peripheral blood eosinophilia, and an elevated immunoglobulin E level.6 This, along with its weak association with nephrotic syndrome, makes KD a more systemic process. With regard to diagnosis, treatment, and prognosis, this stands separate from the discrete process typical in ALHE.6 As in the workup for this patient, the definitive diagnosis requires histopathologic confirmation. ALHE and KD may present concurrently in the same patient, which may be considered justification to send all excised lesions for pathology testing.3

Kaposi sarcoma (KS) manifests as lesions that enlarge from patches to plaques within the skin of patients with AIDS. While the initial violaceous lesions composed of vascular spaces and extravasated erythrocytes may resemble ALHE, the patient population, disease distribution, and progression to brown plaques due to hemosiderin deposition make KS distinct from ALHE on clinical evaluation.11 KS lacks an eosinophilic infiltrate on histology, and stains positive for human herpesvirus 8. The diagnosis of ALHE may be overlooked in presentations of nonhealing, sclerosing, superficial ulcers, in favor of more common diagnoses such as basal cell carcinoma.7 ALHE should also be considered in atypical papulonodular lesions of the genitals.12

ALHE is typically managed with destruction or removal, with first-line treatments including excision, laser therapy, topical or intralesional corticosteroids, or cryotherapy. Second-line treatments include imiquimod, tacrolimus, and radiofrequency ablation or sclerotherapy in a targeted manner, and isotretinoin. Many other treatments approaches have been discussed, including interferon alfa-2b, anti-IL-5-antibody, suplatast tosilate (a cytokine inhibitor), photodynamic therapy, radiotherapy, low-dose methotrexate, and pulsed laser.5,10

ALHE is a rare but well-described benign entity, with the literature favoring surgical removal. Complete excision has been recorded, with success rates as low as 33% and as high as 90% without recurrence. Other destructive modalities have similar rates of success, with selection based on clinician comfort and aesthetic outcome.4,10