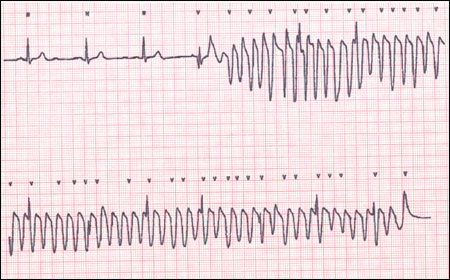 A 23-year-old woman presents to the emergency department (ED) with left-sided burning chest pain that radiates to the epigastrium. The pain, which woke her from sleep 12 hours earlier, is intermittent and is not associated with eating or exertion. She had a single bout of nausea and emesis.

Her medical history is remarkable for an episode of vertigo. She takes no medications and denies tobacco, alcohol, or illicit drug use.

Blood pressure is 101/95 mm Hg; pulse rate, 63 beats per minute; and respiration rate, 16 breaths per minute. The patient has no jugular venous distention. Heart rate and rhythm are regular, with a normal S1 and physiologically split S2; no murmur, rub, heave, or thrill is present. The lungs are clear. The abdomen is nontender.

A complete blood cell count, results from a metabolic panel, and lipase levels are normal. An ECG shows normal sinus rhythm with early precordial R wave transition and no ST-segment or T-wave abnormalities.

The patient's symptoms abate after treatment with antiemetics and a proton pump inhibitor. A telemetry rhythm strip is obtained and is shown here. The patient appears anxious but has no chest pain, diaphoresis, or dyspnea.

What abnormality is suggested by the tracing?

ANSWER: The telemetry rhythm strip shows "marching out" of the underlying normal sinus rhythm (Figure 1, arrows show the QRS complexes) on a background of artifact, which resembles an episode of nonsustained ventricular tachycardia. In another dual lead tracing obtained during the patient's admission (Figure 2), the lower lead clearly shows normal rhythm with a narrow QRS complex and stable R-R interval. Although an artifact is also visible in this lead, it is less pronounced. A superimposed T wave is also apparent when the 2 leads are compared (arrows). 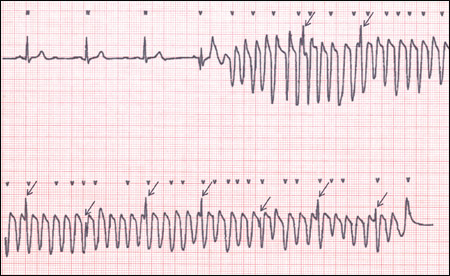 Figure 1 – This telemetry rhythm strip shows a regular and fairly consistent R-R interval obscured by an artifact, which resembles ventricular tachycardia. Slight variation in the R-R interval could be accounted for by sinus arrhythmia.

Cardiac tracings of patients who are monitored in the ED and in intensive care settings commonly show an artifact, which can be mistaken for a true arrhythmia, such as ventricular tachycardia. Recognition of an artifact is important to spare these patients unnecessary and potentially dangerous procedures and therapeutic interventions (such as lidocaine, nitroglycerin, cardiac catheterization, and permanent pacemaker and cardioverter-defibrillator implantation).1,2

Physiological and nonphysiological sources. Physiological (internal) sources include patient movement and electromyographic potentials from muscular activity. Movement-derived artifact results from stretching of the skin and manifests as large swings in the baseline tracing. This can be seen with coughing, ambulation, or position changes.1 Electrical activity from a skeletal muscle source is at a higher frequency than cardiac electrical activity and thus can generally be filtered out using current ECG equipment.3 Motion artifact has been described in patients with rigors and tremor associated with Parkinson disease and alcohol withdrawal.

Implications for management. A substantial percentage of clinicians do not recognize or are uncomfortable diagnosing an artifact. In a survey of more than 1000 physicians who were shown a 2-lead tracing of artifact mimicking a wide-complex tachycardia, 94% of internists, 58% of cardiologists, and 38% of electrophysiologists did not recognize the artifact.5

Several characteristics have been suggested to differentiate true dysrhythmia from ECG artifact. These include a lack of symptoms or hemodynamic compromise during the rhythm change; evidence of normal ventricular complexes within the apparent dysrhythmia (as in this case); association with patient movement; instability of the electrical baseline during and immediately after the rhythm disturbance; and evidence of "notching" of the complexes that comprise the apparent dysrhythmia synchronized with the normal ventricular complexes that precede and follow the rhythm change (also apparent in this case).6,7

Despite recognition of the ECG abnormality as an artifact, an echocardiogram was obtained; the findings were normal. Although the patient had several similar ECG tracings during her observation, these were not associated with symptoms. She underwent no invasive procedures and received no other therapy. The cause of the artifact was not determined. One year later, she was doing well and had no further symptoms.