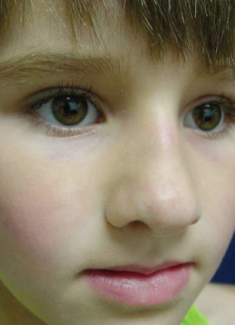 A 5-year-old white boy had fever (temperature, up to 40.5ºC [105ºF]), progressive weakness of the lower extremities, and weight loss of about 3 kg over the past 3 weeks. During this time, he also had decreased appetite, dull abdominal pain, persistent fatigue, a nasal quality of speech, and an erythematous rash on the face, neck, and abdomen. For the past 10 days, he had bilateral leg and thigh pain and difficulty in rising from a sitting position. Recently, he had refused to walk. Four weeks earlier, he had undergone tonsillectomy and adenoidectomy, with bilateral myringotomy and tube placement.

Results of a laboratory workup (including rheumatoid factor, Epstein-Barr and parvovirus studies, hepa-titis panels, HIV test, complete blood cell count, and blood culture) obtained within past 3 weeks were normal. Immunizations were up-to-date. Child had been given acetaminophen and ibuprofen, as needed. No known drug or food allergies. Diet was well-rounded, with no restrictions.

No family history of oncologic, rheumatologic, or immunosuppressive diseases. Age-appropriate developmental milestones had been met. No recent travel or exposure to sick contacts or animals. Child lived with mother, father, and 2 siblings, all of whom were healthy.

After an extensive laboratory workup, the patient was found to have mild pancytopenia and significantly elevated muscle enzyme levels (Table 1). All other laboratory values, including g-glutamyltransferase, uric acid, prothrombin time, partial thromboplastin time, and a chemistry panel, were normal. The abnormal laboratory results coupled with the muscle pain and weakness prompted an MRI evaluation of the pelvis and lower extremities. Findings revealed extensive myositis and subcutaneous edema, consistent with dermatomyositis (Figure 1).

Juvenile dermatomyositis (JDM), a rare autoimmune disorder, is the most common inflammatory myopathy of childhood; 3.2 cases per million are reported annually.1,2 It is primarily a vasculopathy of muscular and dermal capillaries and results in various clinical sequelae. Although the cause is not fully understood, a genetic predisposition (involving B8, DRB1*0301, and DQA1*0501 HLA alleles) and environmental factors (recent bacterial or viral infection and excessive sun exposure) appear to play a role in triggering the inflammatory response within affected tissue.1,2 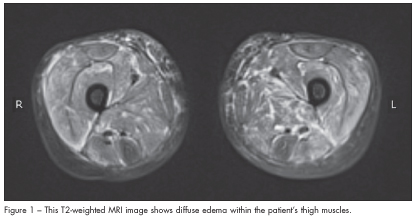 The peak incidence is highest among white girls, with an average age at onset of 7 years. Most cases pre-sent in the spring and summer months, which suggests seasonal variability.3 Our patient presented in May.

PHYSICAL, LABORATORY,
AND RADIOGRAPHIC FINDINGS
Patients with JDM may have a combination of characteristic skin findings, symmetric proximal muscle weakness (sparing eye and facial muscles), myopathic changes on electromyography, elevated muscle enzyme levels, pathologic histology on muscle biopsy, calcinosis, and MRI findings consistent with myositis.1,3,4 MRI, because of its lack of invasiveness, is preferred over muscle biopsy; thus, JDM is often diagnosed on the basis of the MRI results combined with clinical and laboratory findings.2,4 Diagnosis is often delayed because of a prodrome of nonspecific symptoms and signs, which in our patient manifested as fever, weight loss, abdominal pain, fatigue, dysphonia, and poor appetite. 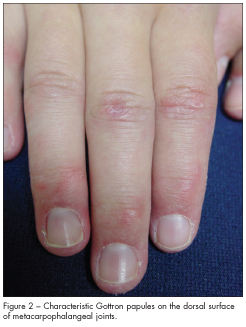 The appearance of a rash on sun-exposed areas of the body (possibly precipitated by sunlight) usually prompts consideration of JDM. An erythematous, violaceous periorbital heliotrope rash (as shown on page 239) may extend along the bridge of the nose and the malar aspects of the face. Scattered telangiectasias may be present within the rash. Edema is frequently noted periorbitally; however, extension to the scalp has been described.5 Gottron papules—scaly, erythematous, papular lesions on the dorsal surface of the knuckles—are also common (Figure 2), although they were absent in our patient. A similar rash may develop on the extensor surfaces of the knees, elbows, and ankles. Nailfold changes, dystrophic calcinosis, and skin ulcerations are other skin findings that correspond to the severity and extent of the disease.

Symmetric proximal muscle weakness is often a slow, progressive process in JDM. The weakness may be apparent not only in the extremities but also in the neck and trunk, as in this case. As in other muscular dystrophies, common activities, such as arising from the floor, climbing stairs, and walking, may be significantly impaired. Patients may exhibit the Gower sign—the need to use the hands and arms to push oneself up from a squatting position.

The mainstay of treatment of JDM is systemic corticosteroids, oral or intravenous.6 Treatment regimens vary among institutions and are often tailored in coordination with a pediatric rheumatologist, according to the severity of disease (Table 2). Additional medical therapies include immunosuppressive agents (methotrexate, cyclosporin, and azathioprine), which are used primarily in corticosteroid-refractory or toxic cases and in relapses.7-11 The use of high-dose intravenous immunoglobulin (IVIG) in JDM is controversial, although it is thought to be useful in
corticosteroid-resistant cases.12 Hydroxychloroquine is another therapeutic adjunct thought to be most effective in patients with prominent cutaneous findings.7

OUTCOME IN THIS CASE

Our patient initially received pulse intravenous methylprednisolone (30 mg/kg/d) for 3 consecutive days in the hospital; this was reduced to weekly boluses as an outpatient. In addition, oral prednisone (2 mg/kg/d), methotrexate (15 mg/m²/wk), and folate supplementation (1 mg/d) was instituted in an attempt to minimize the long-term cumulative corticosteroid use. Daily hydroxychloroquine (5 mg/kg/d) was started, and IVIG (2 g/kg) was administered before discharge because muscle enzyme levels remained elevated after initial treatment. He was also given a proton-pump inhibitor (to minimize gastric bleeding) and calcium and vitamin D supplementation.

After 2 months of treatment, the muscle enzyme levels had normalized, as did the muscle strength in the neck, abdomen, and lower extremities. At the patient’s last clinic visit, he had some mild cutaneous involvement of the face and neck. He continues to receive monthly pulse intravenous methylprednisolone and IVIG. The oral prednisone regimen is currently being weaned. ■