A 34-month-old boy with generalized abdominal pain was brought to the emergency department (ED). The pain was 5 of 10 in severity and worsened with food intake. The child had had a GI illness of 3 days’ duration that resolved 2 days before presentation. This consisted of emesis with no blood or bile that occurred 2 to 3 times a day, unrelated to food intake, and diarrhea of mainly watery stools with no blood or mucus 3 to 4 times a day. He also had loss of appetite. The ED work-up revealed a hemoglobin level of 7.1 g/dL, and the patient was transferred to a regional medical center.

The father had a severe disease in early childhood that required multiple blood transfusions and was eventually cured by splenectomy. Two paternal aunts underwent cholecystectomy because of gallstones in their twenties. 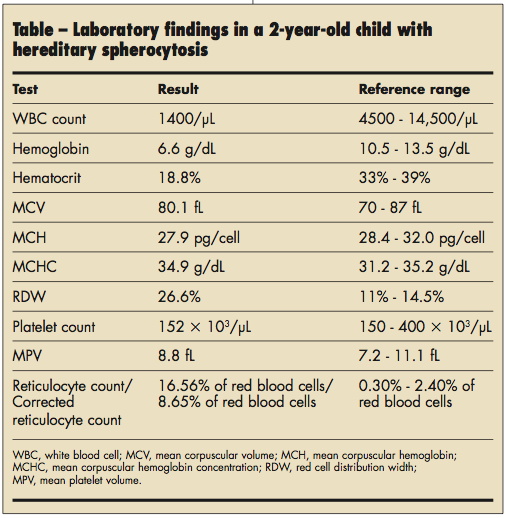 Results of a complete blood cell count are shown in the Table. Stool occult blood was negative; blood group was O positive, Rh positive; and antibody screening was negative. Epstein-Barr virus antibody to viral capsid antigen was high and IgM antibody was low. IgG and IgM for parvovirus B19 and cytomegalovirus antibody were negative. 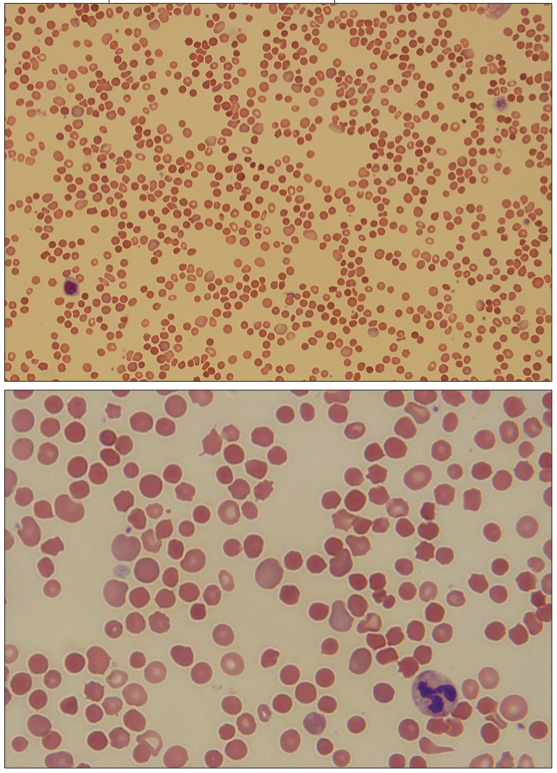 First reported in 1871, hereditary spherocytosis continues to be one of the most common causes of anemia in childhood. Structural abnormalities of the red blood cell (RBC) result in a hemolytic process manifested by spherocytes in the peripheral blood smear with a compensatory elevation of the reticulocyte count.

Incidence. Hereditary spherocytosis occurs in 1 in 2500 to 5000 persons of Northern European descent; the actual incidence may be higher because the diagnosis may be missed in patients with mild disease. Incidence is similar in most ethnic groups, although it is rather uncommon in African-American persons. Most cases (75%) are autosomal dominant with mild hemolysis; a recessive inheritance or spontaneous mutation results in accentuation of hemolysis and accounts for the remaining cases (25%).1

Pathophysiology. The RBC is capable of remarkable changes in shape thanks to the interaction of the cell membrane and the underlying cytoskeleton. The two are linked by proteins, which stabilize the membrane. Abnormalities in the cytoskeleton proteins (ankyrin, band 3, protein 4.2, and spectrin a and ß) result in a more rigid membrane with vesicle formation and less flexible RBCs, which are then subsequently removed from circulation by the spleen.2 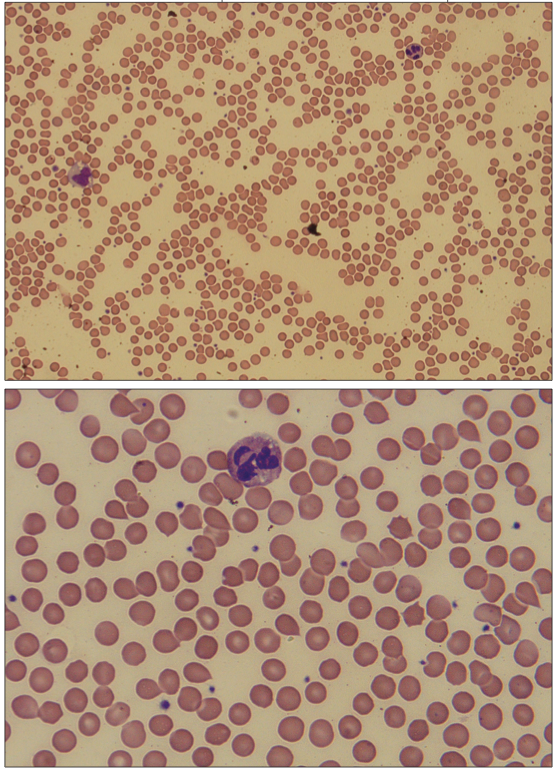 Figure 2 – Spherocytes are apparent in low- and high- power views of the patient’s peripheral blood smear and are slightly more numerous than in the paternal smear. Reticulocytes are less prominent.

Clinical implications. Spherocytosis may present initially as hyperbilirubinemia in a newborn. This patient illustrates the classic presentation of hereditary spherocytosis, which is anemia, splenomegaly, jaundice, and a preceding viral illness—possibly a viral gastroenteritis. Clinical severity tends to be similar in affected family members who share one common genetic anomaly, although reports of families with variable degrees of severity are known.1

Complications. Bilirubin encephalopathy may be acute or chronic (kernicterus) and is of special concern in neonates who are customarily discharged shortly after birth. Factors such as sepsis, ABO incompatibility, and intestinal obstruction may also interact with spherocytosis and result in an increased risk of CNS toxicity.3

Infection with parvovirus B19 may lead to profound anemia secondary to involvement of RBC precursors in the bone marrow. The infection may extend to other cell lines as well, and thrombocytopenia and less commonly neutropenia may develop. Thus a clinical impression of either a malignant or an aplastic process may require bone marrow evaluation if a prompt recovery does not occur.

Serum IgM antibodies against parvovirus B19 may persist for up to 6 months after infection. Viral avidity for neutral glucosphingolipids in the RBC precursor cellular membrane and activation of tumor necrosis factor a with subsequent apoptosis are proposed explanations for the selectivity for and acute decrease in RBC precursors.4

Rarely spherocytosis can be associated with elevated bilirubin, intrahepatic cholestasis, and cholelithiasis in patients with mutations of the ABCB11 gene. This gene encodes for the bile salt export pump. The associated intrahepatic cholestasis can eventually lead to severe liver damage. Other patients may have sporadic episodes of hyperbilirubinemia with normal chemical and histologic findings in between events.5

Diagnosis. The presence of spherocytes—small, dense RBCs with absent central pallor in variable numbers—with compensatory reticulocytosis is usually the first clue to diagnosis. Unfortunately, spherocytes can be found in other entities, such as ABO incompatibility and autoimmune hemolytic anemias, which also need to be considered.

When results of a direct Coombs test are negative, increased hemolysis by an osmotic challenge (RBC fragility) remains the most widely available and utilized test for diagnosis.6 Diagnosis may be missed in up to 90% of cases when not specifically looked for and is often missed in recessive cases, in which the parents have no history of the condition.7

Neonatal and childhood screening. Measurement of mean corpuscular hemoglobin concentration (MCHC), readily available to physicians, may provide a simple but cost-effective way of screening neonates for spherocytosis. An MCHC greater than 36 g/dL has been found to have 82% sensitivity and 98% specificity for diagnosis.7 Combined measurement of high mean corpuscular volume and high red cell distribution width in children older than a year may also serve as a screening tool, with reports showing 63% sensitivity and 100% specificity.8

Treatment considerations. Corticosteroids (prednisone, 1 to 2 mg/kg for 4 to 7 days) have recently been reported to be of value. They increase hemoglobin levels and reduce the need for blood transfusions. Failure to respond is more common in patients who receive lower doses (less than 1 mg/kg) or shorter courses (less than 1 week) of treatment.9

Splenectomy usually results in a significant increase in hematocrit, up to 10%, with a simultaneous drastic decrease in reticulocyte count, as much as 12%.10 Overwhelming postsplenectomy sepsis is now rare (0.8%), and patients usually respond to antibiotic therapy. Preoperative administration of Haemophilus influenzae and pneumococcal vaccines has resulted in a marked decrease of life-threatening episodes.

Concern for an increased risk of sepsis, venous thrombosis, and pulmonary hypertension has stimulated interest in partial splenectomy as an alternative surgery. Resection of 70% to 90% of the spleen usually allows relative preservation of splenic function with a significant decrease in anemia. Splenic regrowth of up to 40% of the original volume may occur within 4 years after surgery; recrudescence of the anemia may also occur but to a lesser degree than presplenectomy.11