A Woman With New-Onset Psychosis: A Rare Presenting Sign of Thyroid Storm

A 60-year-old woman with no significant past medical history was brought to the emergency department (ED) by her brother for a 2-week history of decline in mental status and gradually worsening paranoid thoughts.

At presentation, she was in no acute distress; was alert, awake, and oriented only to self; and was a poor historian. She was confused and confabulating. The patient’s brother reported that she had a history of alcohol abuse. The patient complained of diffuse abdominal pain but denied fever, chills, chest pain, changes in bowel or bladder habits, nausea, vomiting, dizziness, or a recent fall or trauma.

On examination, she was found to be afebrile (temperature, 37.4°C) and tachycardic (122 beats/min), with a blood pressure of 118/61 mm Hg. Physical examination of the eyes revealed no proptosis or exophthalmos, with clear white sclerae and pale pink conjunctivae. No scars, masses, or tenderness were noted on her head. Observation of the neck and palpation of the thyroid did not reveal enlargement or nodules. Cervical and occipital lymph nodes were not enlarged.

The chest was clear to auscultation with bilateral air entry, and no rales, rhonchi, or wheezing were heard. The abdomen was soft, nontender, and nondistended, with positive bowel sounds in all quadrants. Auscultation of the heart revealed audible S1 and S2 with tachycardia; no murmurs, gallops, or rubs were heard. No tremor was noticed; +1 bilateral edema was present in the lower extremities.

Neurologic examination showed grossly intact cranial nerves, motor strength 5/5 throughout, and intact sensation to dull and sharp stimuli. Psychiatric examination was significant for soft and slow speech; her mood had a flat affect, her thought process was disorganized, and her thought content included paranoid delusions of somebody following her and trying to harm her. She denied suicidal or homicidal ideations. She had poor insight and poor judgment. 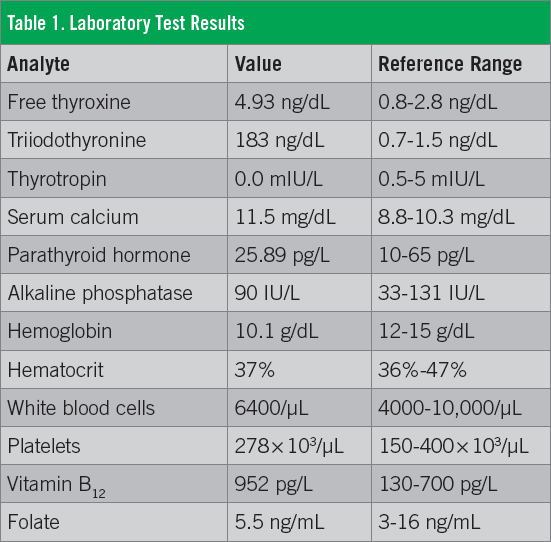 Lumbar puncture was performed to exclude encephalitis, and cerebrospinal fluid was clear with no WBCs, epithelial cells, or organisms, with normal glucose (65.98 mg/dL) and protein (43.61 mg/dL) levels.

Results of computed tomography (CT) without contrast of the head were unremarkable, with no evidence of hemorrhage, mass, or acute infarct. Although observation of the neck and palpation of the thyroid revealed no enlargement or nodules, results of chest CT without contrast showed a diffusely enlarged thyroid with areas of low density. Thyroid ultrasonography revealed a multinodular goiter. Echocardiography showed a normal left-ventricular ejection fraction (70%-75%) with moderate tricuspid regurgitation, moderate mitral valve regurgitation, and moderately elevated pulmonary artery systolic pressure.

The patient was admitted to the intensive care unit because of her altered mental status and tachycardia, and she was referred to the psychiatry department for delirium and possible Korsakoff syndrome. She had a total score of 45 on the Burch-Wartofsky Point Scale (BWPS) for the diagnosis of thyrotoxicosis, highly suggestive of thyroid storm (Table 2).1

Thyroid storm is an extremely rare life-threatening emergency with a mortality rate between 20% and 30% despite treatment. It is most commonly seen in patients with Graves disease who are nonadherent to therapy. The increased availability of thyroid function tests and treatment options has resulted in the early detection and treatment of hyperthyroidism; thus, only 1% to 2% of cases manifest as thyroid storm.

The diagnosis of thyroid storm is based upon the presence of life-threatening signs and symptoms such as altered mental status, hyperpyrexia, gastrointestinal tract manifestations, and cardiovascular dysfunction, with tachyarrhythmia being the most common cause of death. Although the common clinical manifestations of hyperthyroidism are a result of sympathetic overactivity (eg, restlessness, sweating, tremor, moist/warm skin, fine hair, tachycardia, diarrhea), apathetic thyrotoxicosis is seen in elderly persons who can present with lethargy as the only symptom.2,3

Thyroid storm presenting as acute psychosis is especially rare in patients with no related medical history. In order to establish timely and appropriate treatment for this life-threatening emergency, it is important to recognize the rare presentation of signs and symptoms, with collaboration among specialists to clarify their etiology.

Many causes are possible in cases of altered mental status and acute-onset psychosis in older patients, and it is important to initially rule out trauma, encephalitis, and drug or alcohol intoxication. While thyrotoxicosis is not an immediate diagnosis as the cause of psychosis, previous cases have been reported, mostly in patients with Graves disease or in younger patients with subacute thyroiditis. Thyrotoxicosis presents clinically with suppressed thyrotropin, elevated T4/T3, and elevated erythrocyte sedimentation rate. Common symptoms include heat intolerance, sweating, weight loss, palpitations, insomnia, agitation, and mania; rarely, patients can have psychosis and confusion. The mechanism relating psychosis and thyrotoxicosis is poorly studied, but some studies suggest the elevated T3 levels affect the limbic system, which possesses high concentrations of T3 receptors. Additionally, psychosis may occur due to the effects of thyroid hormones affecting serotonin, dopamine, and other second-messenger cascades acting on the central nervous system.4,5

In our patient’s case, we diagnosed thyrotoxicosis based on the clinical presentation and ruling out other causes for her psychosis. The clinical presentation of tachycardia, suppressed thyrotropin, elevated T4/T3, multinodular thyroid on imaging, and a BWPS score of 45 supported the diagnosis. Additionally, using imaging, lumbar puncture, and laboratory tests, we ruled out trauma, encephalitis, and drug or alcohol intoxication as the possible cause of psychosis.

The patient was started on 100 mg of intravenous hydrocortisone, 40 mg of oral methimazole every 8 hours, and 30 mg of oral propranolol every 8 hours. She was also given 5 drops of strong iodine solution orally every 6 hours for 3 days. She was given 1 mg of intramuscular lorazepam every 8 hours as needed for agitation and 1 mg of oral haloperidol twice daily for delusions. Folic acid (1 mg orally once daily in the morning), vitamin B1 (100 mg orally once daily in the morning) were also started due to her history of alcoholism.

Her cardiovascular symptoms improved, and she was transferred to the psychiatry unit on hospital day 12.

On discharge, she was afebrile (36.9°C), her resting pulse was 78 beats/min, her blood pressure was 134/78 mm Hg, and her respiratory rate was 18 breaths/min. She was discharged on the following oral medication regimen: 1 mg of haloperidol twice daily, 10 mg of methimazole every 12 hours, 60 mg of propranolol every 12 hours, 100 mg of vitamin B1 once daily in the morning, 1 mg of folic acid once daily in the morning, and 5 mg of donepezil once daily at bedtime.

Psychosis is a rare presenting sign of thyrotoxicosis, but the latter should be considered in patients with acute-onset psychosis in the absence of another cause. In patients presenting with altered mental status and tachycardia with no trauma, no encephalitis, and negative toxicity screen results, it is important to consider a possible thyroid etiology. Assessing a patient for thyrotoxicosis is simple and quick and can prove valuable in arriving at an appropriate diagnosis and treatment plan.

Syed A. A. Rizvi, PhD, is a professor in the Department of Pharmaceutical Sciences, College of Pharmacy, at Nova Southeastern University in Fort Lauderdale, Florida.