A Woman With Abdominal Pain Is Found to Have Renal Cysts. What’s the Cause?

Authors:
Ricky Kortyna, MMS, PA-C, is a physician assistant at the University of Pittsburgh Medical Center in Pittsburgh, Pennsylvania.

Emily Murphy, MPAS, PA-C, is an assistant professor in the Physician Assistant Studies Program at the University of Pittsburgh School of Health and Rehabilitation Sciences in Pittsburgh, Pennsylvania.

Citation:
Kortyna R, Murphy E. A woman with abdominal pain is found to have renal cysts. What’s the cause? Consultant. 56(7):

A 36-year-old woman was seen in the emergency department secondary to the acute onset of right lower-quadrant pain.

Her previous surgical history included a bilateral tubal ligation. Her past medical history was positive for a mood disorder, for which she had been taking lithium for a number of years. She reported social alcohol use and cannabis use, and she had been a 1 pack per day smoker for more than a decade. Otherwise, the review of systems was noncontributory.

She had no history of ovarian cysts, and she still had her appendix. Because of the concern that she may have been developing a surgical abdomen, a contrast-enhanced computed tomography (CT) scan of the abdomen was obtained. While the CT scan revealed no findings concerning for a surgical abdomen, it did show that the woman had several small gallbladder stones, several renal stones, an unruptured 16-mm left corpus luteum cyst, bilateral tubal ligation clips, a normal appendix, and as shown in Figures 1 and 2, multiple renal cysts. 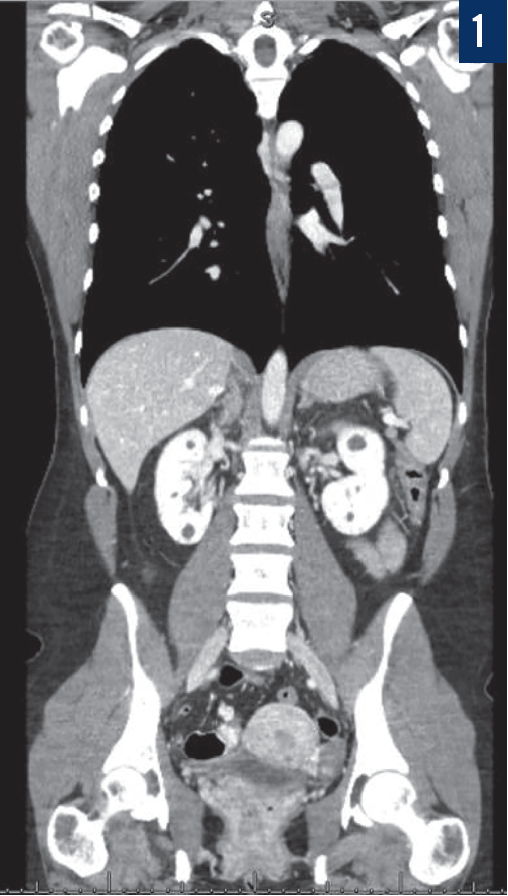 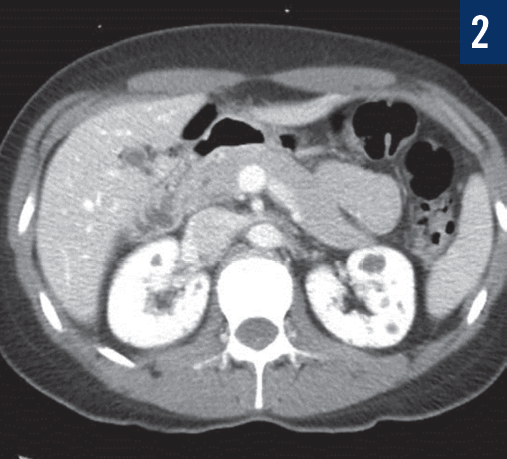 Lithium nephropathy is divided into 3 categories: acute intoxication, nephrogenic diabetes insipidus, and chronic renal disease.1,2 Nephrogenic diabetes insipidus occurs in up to 40% of patients on lithium.1 It may be reversible if treatment is stopped soon after initiation, but it often is not reversible in persons who have been treated with lithium for years.3 When lithium nephropathy develops, lithium should be discontinued; if lithium cannot be discontinued, concomitant use of amiloride can improve or lessen the severity of mild to moderate lithium-induced nephrogenic diabetes insipidus.4 Other treatment options include the use of a thiazide diuretic, the use of a nonsteroidal anti-inflammatory drug, and adherence to a low-sodium diet.3

Chronic kidney changes in those patients on long-term lithium can include focal interstitial nephritis, tubular atrophy, glomerulosclerosis, and distal tubular dilation with microcysts.1,2 Renal cysts occur in up to 62% of patients on lithium—in fact, one team of authors found that renal cysts occurred in 100% of 16 patients with affective disorders who were undergoing lithium therapy and who had moderate to severe chronic renal insufficiency.1 Up to 20% of patients on lithium will experience a slowly progressive decline in their glomerular filtration rate.3

PKD is an autosomal dominant disease characterized by enlarged kidneys with multiple cysts that invade the renal parenchyma and eventually cause renal failure. PKD is associated with liver cysts and cerebral berry aneurysms. Persons with PKD remain asymptomatic until renal failure occurs. Initially, urinalysis shows mild hematuria, and as the disease progresses, proteinuria will present. Polyuria and hypertension also may be associated with PKD. The kidneys can enlarge to the point of being readily palpable on abdominal examination.5 Six or more cysts in women or 9 or more cysts in men on magnetic resonance imaging scans may be considered as PKD.1 Our patient’s kidneys were of normal size, so PKD was ruled out.

Medullary sponge kidney is an autosomal dominant disease that occurs in adults and often is found incidentally on radiographs. The condition is associated with normal renal function, and it may present with hematuria, infection, or renal calculi.5 Radiographically, the cysts are located in the medulla, whereas with lithium-induced nephropathy, the cysts are located in both the medulla and the cortex.1,2

Tuberous sclerosis is an autosomal dominant condition.6 It is associated with dermatologic findings of facial angiofibromas, connective tissue plaques known as shagreen patches, and hypopigmented lesions known as ash leaf macules. Tuberous sclerosis also features associated central nervous system hamartomas (possibly leading to seizures), retinal hamartomas, and renal angiomyolipomas. Mental retardation and hypertension also may occur. Our patient had none of the dermatologic manifestations of tuberous sclerosis and no evidence of renal angiomyolipomas.