Why Does This Toddler Refuse to Walk?

A 25-month-old girl presented with a 1.5-week history of not feeling well. She had had intermittent, cramping, diffuse abdominal pain, increasing irritability, and decreased activity. Her parents noted that she had not been running around like she normally did and that she had been refusing to walk, despite not complaining of leg pain. The child sometimes cried with a change of positioning of her lower half, but she appeared to have no pain with using her arms or hands. The parents noticed that her gait was somewhat wobbly, but there was no history of falls or trauma. They denied fever, vomiting, diarrhea, headache, rash, bruising, flank pain, or back pain in the girl. Her appetite had been slightly decreased.

The child had been seen at another hospital 2 days prior, where urinalysis and kidneys, ureter, and bladder (KUB) radiography were performed, the results of which were normal. She had received a diagnosis of constipation and had been treated with a glycerin suppository. She had had a bowel movement afterwards at home but did not feel any better.

The girl had had cold symptoms 3 weeks earlier, which had resolved spontaneously after several days. Her past medical history also was significant for a gluteal skin abscess due to methicillin-resistant Staphylococcus aureus (MRSA), which had required incision and drainage several months previously.

On physical examination, the girl was afebrile with stable vital signs. She was sitting on her mother’s lap and did not want to walk. When she eventually took a few steps, her gait was wide-based and waddling, but symmetric and without limping. She had a hyperlordotic stance. The rest of the physical examination findings were normal.

Magnetic resonance imaging (MRI) of the spine was ordered, the results of which are shown in Figures 1 and 2.

Why the girl’s reluctance to walk?

The girl underwent a computed tomography (CT)–guided biopsy with washout, but cultures did not grow any organisms. She was hospitalized for 12 days and treated with intravenous (IV) ceftriaxone and vancomycin, and then treated at home with IV clindamycin for 38 days via a peripherally inserted central catheter. She still has occasional pain at the site and requires ibuprofen 2 to 3 times a week. 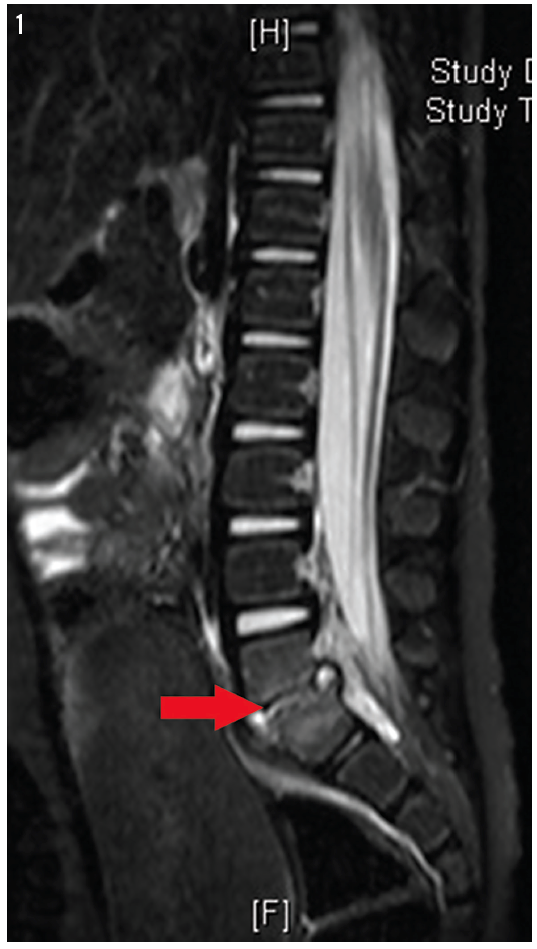 Diskitis occurs most often in people over 50 years of age. Pathogens can reach the bones of the spine via 3 routes: hematogenous spread from a distant focus of infection, direct inoculation from trauma or spinal surgery, or contiguous spread from an adjacent soft tissue infection.

The most important infecting organism is S aureus, which accounts for more than 50% of diskitis cases. As the proportion of S aureus strains that are methicillin-resistant has increased over recent decades, the relative importance of MRSA as a cause of vertebral osteomyelitis also has increased. Less common but important pathogens include the following1,2:

• Pseudomonas aeruginosa and Candida species, which frequently are associated with intravascular access sepsis or injection drug use2

• Groups B and G hemolytic streptococci, especially in patients with diabetes mellitus

The major clinical manifestation of vertebral osteomyelitis is back or neck pain. Spinal pain usually begins insidiously and worsens progressively over several weeks and sometimes over several months. The pain often is worse at night and may be relieved, at least initially, by bed rest. Patients whose infections extend posteriorly into the epidural space may present with clinical features of an epidural abscess, the typical sequence of which often is back pain, which is often focal and severe, followed by root pain, motor weakness, sensory changes, and eventually paralysis. Fever is an inconsistent finding.

On physical examination, local tenderness to gentle spinal percussion is the most reliable clinical sign of diskitis; this tenderness frequently is accompanied by reduced back mobility and/or protective spasm of nearby muscles. Rarely, a mass or even spinal deformity is visible. The physical examination should include palpation for a distended bladder, a check for the signs of psoas abscess (eg, flank pain; limitations of and pain on hip movement), and a careful neurologic assessment of the lower limbs.

MRI is the most sensitive radiologic technique for detecting vertebral osteomyelitis.4 MRI also is superior to CT for the detection of epidural abscesses. Abnormalities consistent with osteomyelitis can be seen on MRI before they are visible on plain radiographs.

Biopsy generally is needed to confirm the clinical and/or radiographic suspicion of vertebral osteomyelitis. Biopsy material may be obtained via an open procedure or via CT-guided needle biopsy. The samples should be sent for aerobic, anaerobic, mycobacterial, and fungal cultures and pathology.1

Most cases of diskitis respond to antimicrobial therapy. Nevertheless, surgery is necessary in some patients. When culture and/or Gram stain of the CT-guided needle biopsy are positive for bacteria, antibiotic therapy should be guided by the results of susceptibility testing. In patients with negative cultures and Gram stains despite repeated biopsies, and in unstable patients, empiric antibiotic treatment should be started. An appropriate regimen is vancomycin (15-20 mg/kg every 8-12 hours) plus one of the following: cefotaxime (2 g IV every 6 h), ceftazidime (1-2 g IV every 8-12 h), ceftriaxone (1-2 g IV daily), cefepine (2 g IV every 12 h), or ciprofloxacin (400 mg IV every 12 h, or 500-750 mg orally twice daily). Treatment should last a minimum of 6 weeks. Longer therapy may be necessary for patients with advanced disease. Surgical debridement is necessary in a minority of patients.

The most serious complication of vertebral osteomyelitis is neurologic impairment secondary to either abscess formation or bony collapse. Most but not all patients have gradual improvement in back pain after therapy is begun, and the pain typically disappears after bone fusion occurs. Still, back pain can persist. The best way to reduce the morbidity and mortality associated with vertebral osteomyelitis is to limit the time between the onset of symptoms and the initiation of appropriate therapy.

Constipation is common in children. Children with constipation can present with fecal impaction and severe, colicky, lower abdominal pain. In a series of 83 children presenting to a primary care provider or to an emergency department with acute abdominal pain, the most common underlying cause was acute or chronic constipation, occurring in 48% of patients. In many cases, rectal examination was a key step in establishing the diagnosis.

Constipation is likely in children with at least 2 of the following characteristics: fewer than 3 stools weekly, fecal incontinence (usually related to encopresis), large stools palpable in the rectum or through the abdominal wall, retentive posturing, or painful defecation.5 Parents may not recognize the relationship of constipation to the child’s abdominal pain.

A perianal abscess is a collection of purulent material that originates from an infected crypt gland in the anus or rectum. Perianal abscesses traverse distally in the intersphincteric groove into the perianal skin, where they present as a tender, fluctuant mass. If it is not drained, a perianal abscess can expand into adjacent tissues (eg, ischioanal fossa, supralevator space). It also can progress to a generalized systemic infection.

Patients with a perianal abscess often present with severe pain in the anal or rectal area. The pain is constant and may be associated with bowel movements. Constitutional symptoms such as fever and malaise are common. Purulent rectal drainage can be present if the abscess has begun to drain spontaneously. On physical examination, an area of fluctuance or a patch of erythematous, indurated skin overlying the perianal skin may be noted. However, in some patients, and with some types of abscesses (eg, supralevator abscess), there are no findings on physical inspection, and the abscess can be felt only via digital rectal examination.

A perianal abscess can be managed in the office or the emergency department using local anesthesia. Complex abscesses should be drained in the operating room.

Transient synovitis is characterized by pain and limited range of motion in the hip, is without clear cause, and resolves gradually with conservative therapy. It occurs in children between 3 and 8 years of age, with the mean age at presentation of 6 years. The male to female ratio is slightly greater than 2 to 1. Symptoms affect both hips in 5% of children. The cumulative lifetime risk is 3%. Children with transient synovitis generally appear well. Systemic symptoms including high fever may occur, but fever typically is absent or is low grade.

Septic arthritis of the hip must be excluded. Patients who are nontoxic, with minimal fever (temperature < 38.5°C), a WBC count less than 12,000/µL, and either an ESR less than 20 mm/h or a CRP level less than 20 mg/L often can be followed clinically.6-8 Patients with clinical or laboratory findings of concern should undergo hip ultrasonography. Diagnostic arthrocentesis may be necessary to definitively exclude septic arthritis.

The etiology of transient synovitis is unclear; posttraumatic, allergic, and infectious causes have been proposed.9,10 Because 32% to 50% of children presenting with transient synovitis have had a recent upper respiratory tract infection, an infectious cause commonly is assumed. In one small study of patients with transient synovitis, approximately half had elevated blood and/or synovial fluid interferon levels, and approximately half had elevated antibody titers to Mycoplasma pneumoniae or a range of viruses (sometimes more than one).9

The management of transient synovitis is conservative. Rest, nonsteroidal anti-inflammatory drugs, and a return to full activity as tolerated are recommended. The prognosis usually is excellent.

Maya Myslenski, MD, is assistant professor at Case Western Reserve University and an attending physician in the Department of Emergency Medicine at MetroHealth Medical Center in Cleveland, Ohio.

David Effron, MD, is assistant professor of emergency medicine at Case Western Reserve University, an attending physician in the Department of Emergency Medicine at MetroHealth Medical Center, and a consultant emergency physician at the Cleveland Clinic Foundation, in Cleveland, Ohio.

6. Kocher MS, Mandiga R, Zurakowski D, Barnewolt C, Kasser JR. Validation of a clinical prediction rule for the differentiation between septic arthritis and transient synovitis of the hip in children. J Bone Joint Surg Am. 2004;86-A(8):1629-1635.

8. Singhal R, Perry DC, Khan FN, et al. The use of CRP within a clinical prediction algorithm for the differentiation of septic arthritis and transient synovitis in children. J Bone Joint Surg Br. 2011;93(11):1556-1561.