Can You Identify This Worsening Rash?

A 4-year-old girl with a history of atopic dermatitis presented with 5 days of worsening rash and 3 days of fever in the setting of upper respiratory symptoms. The girl’s mother reported that the eczema had been present at baseline but began worsening with the spreading of erythema to the child’s upper and lower extremities (Figures 1 and 2). The mother reported that she had continued to use the girl’s regular eczema medications, in addition to trying a holistic treatment of white mineral clay for 1 day.

However, the patient had also started limping and refusing to bear weight on her right foot, and the day prior to presentation the lesions on her extremities had become filled with purulent fluid with some areas of draining. These symptoms prompted the girl’s mother to seek the care of a primary care physician. The girl was seen and was prescribed mupirocin and an unknown oral antibiotic. She was also instructed to do daily bleach baths.

Upon returning home, the mother attempted to give the girl the oral antibiotic, but the patient had emesis following administration of the medication. She also had decreased oral intake and started to develop decreased urination. For this reason, the mother brought her to our community hospital emergency department (ED) for evaluation. 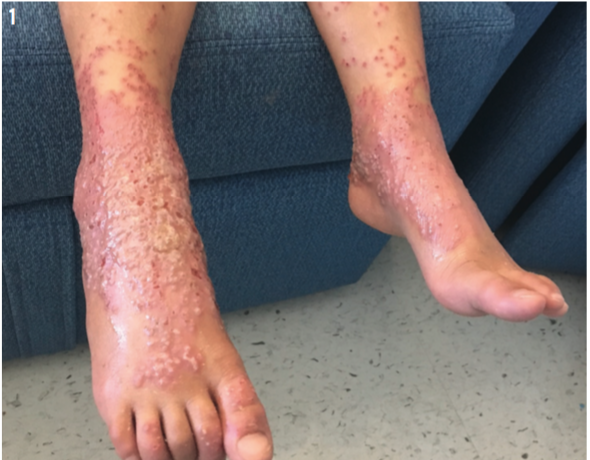 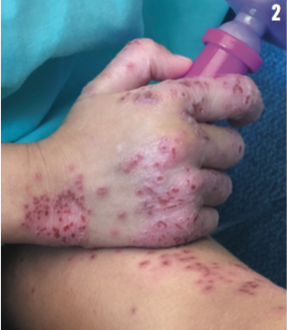 When the girl arrived in the ED, she was noted to be afebrile with a severe rash over her upper and lower extremities. Vitals signs included a temperature of 36.9°C, pulse of 115 beats/min, respiration of 24 breaths/min, and pulse oximetry of 99% on room air. Physical examination results revealed dry, erythematous patches with overlying monomorphic papules, pustules, and excoriations. Her skin was weepy with significant involvement of the dorsal aspects of her feet, bilaterally right greater than left. There was swelling of the right ankle with limited range of motion and decreased ability to dorsiflex. Laboratory test results included blood culture, C-reactive protein of 1.4 mg/L (reference range:
≤ 8.0 mg/L),  and a complete blood count with a white blood cell count (WBC) of 8100/µL (48% neutrophils, 6% bands, 42% lymphocytes). The WBC reference range was 4000-10,000/µL.

What is the cause of the girl’s severe rash?

The girl was started on intravenous clindamycin and was admitted due to concern for possible superinfection of her underlying eczema. Following admission, a bacterial culture and herpes simplex virus (HSV) culture from the skin lesions were obtained. She was continued on intravenous clindamycin, and a dermatologist was consulted by phone. After reviewing photographs of the skin lesions, the dermatologist felt confident that the girl’s presentation and laboratory findings were consistent with eczema herpeticum.

In addition to multiple topical eczema therapies, she was started on oral acyclovir for a total 5-day course, and continued on clindamycin for possibility of superinfection. She was discharged home with instructions to follow up with a dermatologist the next day. After discharge, her HSV culture result was positive for HSV-1, confirming the diagnosis of eczema herpeticum. Her superficial wound culture grew rare Staphylococcus aureus susceptible to clindamycin.

Eczema herpeticum is an extensive vesicular cutaneous eruption caused by HSV that arises from pre-existing atopic dermatitis.1 Atopic dermatitis is a common inflammatory eczematous condition affecting 15% to 30% of children and is caused by genetic, neuroendocrine, immune, and environmental factors as well as by infection and a defective epidermal barrier.2,3 Eczema herpeticum can also concomitantly occur with psoriasis, eczema, irritant contact dermatitis, burns, and seborrheic dermatitis.4

Children with atopic dermatitis have a higher risk of developing eczema herpeticum due to an impaired protective function of the skin. The affected area is easily infected by bacteria and viruses as a result of the disruption of the epidermal barrier and an impaired innate immune response.5  Such secondary bacterial superinfections are mostly due to S aureus. These secondary superinfections as well as and bacteremia are the most frequent causes of mortality secondary to eczema herpeticum.1 Patients with certain features of atopic dermatitis, including early-onset disease, more extensive or head and neck involvement, and higher levels of immunoglobulin E, have higher risk of eczema herpeticum.2,3

HSV type 1 (HSV-1), a member of the double-stranded DNA Herpesviridae family, is the most common pathogen of eczema herpeticum, although infection with HSV-2 has also been implicated.1 The initial epidermal presentation is often erythematous changes presenting as small, monomorphic, dome-shaped papulovesicles that rupture to form tiny punched-out ulcers overlying an erythematous base. Patients commonly present with herpetic vesicles over an extensive mucocutaneous surface, usually the face, neck, and upper trunk. Constitutional symptoms such as fever, malaise, and lymphadenopathy may occur. The virus is presumably spread from a recurrent oral HSV infection or asymptomatic shedding from the oral mucosa.6

Timely diagnosis and treatment are essential to prevent or minimize complications of eczema herpeticum. Therefore, a low level of clinical suspicion is necessary to initiate diagnostic workup. Viral culture is the standard for diagnosis of HSV infection. The microscopic finding of a positive Tzanck test with multinucleated giant cells can confirm an HSV infection and provide rapid diagnosis, although its specificity and sensitivity are operator dependent.7 Direct fluorescent antigen testing (also known as direct immunofluorescence) is rapid and inexpensive; a fluorescently tagged antibody can detect an HSV antigen and also distinguish between HSV-1 and HSV-2 infections.1

Acyclovir is the mainstay of treatment. Prophylactic acyclovir is considered first-line systemic treatment for patients with recurrent episodes of eczema herpeticum. Erratic compliance or poor absorption are possible explanations for patients who fail prophylactic acyclovir. Infection with herpes strains resistant to thymidine kinase inhibitors may be another reason for treatment failure, although resistance is uncommon and is most often recognized in the setting of immunosuppression. Herpes simplex strains resistant to acyclovir will also be resistant to famciclovir, valacyclovir, and penciclovir. Alternatives are cidofovir and foscarnet, but both are available only as intravenous formulations and both carry the risk of severe renal toxicity. In severe recalcitrant cases, interferon-γ or intravenous immunoglobulin should be considered.8

Hospitalization is recommended for immunocompromised patients and those with severe disease. In hospitalized patients, statistically significant time-dependent increase in length of stay with every day of delay in initiating acyclovir therapy highlights the importance of early recognition of eczema herpeticum in children with atopic dermatitis.2  A recent retrospective study performed at a children's hospital showed predictors of hospitalization in a cohort of patients aged 0-18 years included male sex, age of less than 1 year, fever, and systemic symptoms at presentation.9 Oral antiviral drugs are expected to be equally as effective.  Prophylactic oral antistaphylococcal antibiotics such as cephalexin, clindamycin, doxycycline, or trimethoprim-sulfamethoxazole should also be administered given the frequency of secondary infection.10

Despite the characteristic clinical manifestation of eczema herpeticum, misdiagnosis can occur and lead to severe complications. Differential diagnosis includes impetigo, bacterial superinfection of eczema, primary varicella infection, and eczema vaccinatum (after smallpox vaccination).11 Eczema herpeticum with secondary staphylococcal infection may be confused with impetigo and result in delayed acyclovir therapy. In an immunocompromised patient, the mortality rate is reported to be approximately 6% to 10% and as high as 50%.11 The disease can recur in previously infected areas, and progress to disseminated infection, herpes keratitis, and death if untreated.1

Rita Damico, DO, is a third-year pediatric resident at Children’s National Medical Center in Washington, DC.

Wendy Hoffner, MD, is an attending physician and assistant professor of pediatrics at Children’s National Medical Center at George Washington University School of Medicine and Health Sciences in Washington, DC.