Why Is This Boy Unable to Rotate His Palms and Forearms?

A 7-year-old boy was brought to the office by his mother after the boy complained of difficulty participating in baseball because he was unable to fully turn the palm of either hand into the flattened, or supinated, position. Furthermore, a teacher recently had noted the limited rotation of the boy’s forearms.

There was no history of injury, and the patient denied a history of pain in either upper extremity. The mother had not noted any problem before this complaint. The boy’s birth history, growth, and development were normal. His general health was excellent except for allergies. There was no family history of a similar condition, according to the mother. 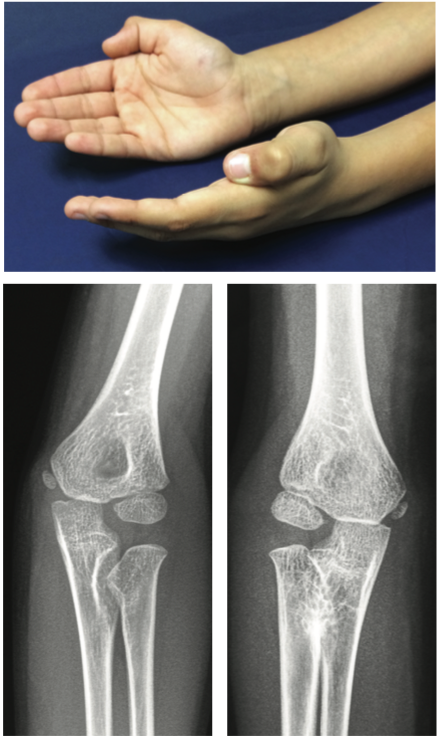 On examination, the patient had full range of motion of both shoulders. Full flexion and extension of the elbows was noted. The right forearm was fixed in about 10° pronation. The left forearm rotation showed 10° pronation to 0° pronation. No redness, warmth, tenderness, swelling, or bruising was seen in either forearm. The neurological exam and circulation were normal in both arms. Strength of the major muscle groups in both upper extremities was normal. No other bone or joint abnormalities were seen. Radiographs of both forearms were obtained.

What diagnosis can be made based on these radiographs?

Congenital radioulnar synostosis is a rare condition. It was first described by Sandifort in 1793.1 It is the most common error in segmentation in the long tubular bones but occurs much less frequently in the long bones of the lower extremities.2 It occurs in the proximal forearm in the large majority of cases and occurs bilaterally in 60% of the reported cases.3 It reportedly has a male predilection.4

The condition is present at birth and may be familial, inherited as an autosomal dominant condition.5 The disorder has been associated with polyploidy of the X and Y chromosomes.2

Frequently, the condition is not recognized by the parents until the child becomes active, when the severity of the pronation deformity limits the child’s daily activities, such as catching a ball.3

Surgical intervention is reserved for those children whose synostosis has led to extreme positions of forearm rotation and is generally not necessary, because children with this abnormality adapt quite well to the condition. Restriction of activity or sports participation usually is not needed.4

The parents and the orthopedist agreed in this case that surgery was not needed because the boy had adapted to his condition with very little difficulty. He is able to perform well in sporting activities, and his physical limitations are very few.

Michael W. Cater, MD, is a physician at Pediatric and Adult Medicine in Tustin, California.