What’s Causing These Keratotic Papules and Loss of Eyebrows?

A 17-year-old adolescent girl presented with a 12-year history of progressive hair loss involving the outer aspects of her eyebrows. From 6 months of age, her face had been remarkable for erythema and asymptomatic, hyperkeratotic, follicular papules, which initially had developed on the lateral aspects of the eyebrows and later also appeared on the cheeks and forehead. She also had small, red, rough papules on her arms and thighs.

Her past health was unremarkable. Her parents were healthy and nonconsanguineous. There was no family history of similar problems. 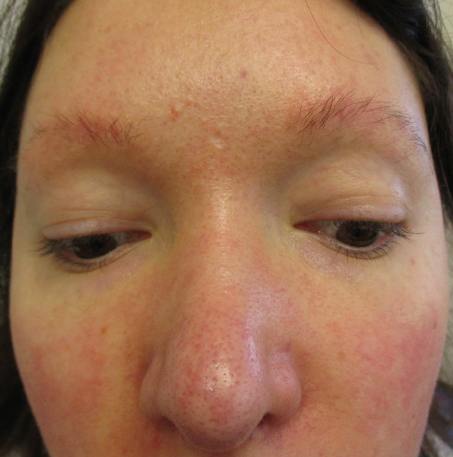 Ulerythema ophryogenes is a relatively rare cutaneous disorder characterized by inflammatory keratotic papules on the face and involving the lateral eyebrows in particular. The term ulerythema ophryogenes (from Greek oule, scar; erythema, redness; ophrys, eyebrow; genes, arising from) was coined by Taenzer in 1889.1 The condition is also known as keratosis pilaris atrophicans faciei.

The exact incidence of ulerythema ophryogenes is not known, with information on this condition limited to case reports. One of the authors, Dr Barankin, sees 1 or 2 new cases per year. The condition is more common in fair-skinned boys with blond hair.2

Ulerythema ophryogenes is caused by abnormal keratinization of the infundibulum of pilosebaceous follicles. The resultant horny plugs fill the follicular orifice, leading to obstruction of the growing hair shaft and inflammation. Chronic inflammation results in atrophy or loss of hair follicles and sebaceous glands, as well as dermal fibrosis.3 The laminin α1 gene, LAMA1, located on chromosome arm 18p11.3, may be involved in the pathogenesis of some of the cases.3,7 The deletion of LAMA1 may result in the disruption of the formation of laminin, a major component of the basement membrane that is involved in the process of cell differentiation, adhesion, and migration.3

In the early stage, the follicular orifice is distended by a keratotic plug that may contain twisted hairs. A mild perifollicular inflammatory infiltrate usually is present in the adjacent dermis.3 In the later stage, dermal fibrosis and atrophy or loss of hair follicles and sebaceous glands may be seen.3

Ulerythema ophryogenes typically presents within the first few months of life with erythema and tiny keratotic follicular papules on the lateral aspects of the eyebrows.6 Over time, this may result in destruction of hair follicles and progress to scarring, atrophy, and alopecia of the eyebrows,6 as in our patient’s case. Erythema and larger keratotic follicular papules may develop on the cheeks and forehead, usually between 5 and 12 years of age.8 With time, pitted, depressed scars may occur.

Involvement of the scalp usually does not occur until the teens.8 The lesions are asymptomatic, and the affected skin is rough. Keratin plugs cannot be expressed with pressure. The disease is usually bilateral, although rarely it may be unilateral.9 Ulerythema ophryogenes frequently is accompanied by keratosis pilaris of the lateral aspects of the arms and thighs.5,6

The disease tends to progress until puberty, when it becomes stationary or starts to improve. Occasionally, progression may continue through adolescence.9 The scarring and loss of eyebrows usually are permanent.

Avoidance of sun exposure, regular use of broad-spectrum sunscreens, and wearing of protective hats when outdoors should be emphasized.

Treatment with topical keratolytic agents, such as lactic acid, glycolic acid, salicylic acid, tretinoin, vitamin D3 analogue, or urea in combination with a topical corticosteroid or oral retinoids, has been used with some success.3 Laser treatment and intense pulsed light have been used with success in a small number of patients in reducing the erythema but not the skin roughness.8 Though uncommonly used in this condition, physical treatments such as chemical peels and microdermabrasion can be helpful for the roughness. Hair transplant may be considered if the disfigurement is distressing to the patient.10 Referral to a dermatologist for diagnostic confirmation and treatment is advised.