A 17-year-old adolescent presented with intermittent hematochezia and right-sided chest pain for one day. He denied having had fever, diarrhea, vomiting, shortness of breath, palpitation, or cough, and he reported no changes in appetite, bladder, or bowel habits. He had been experiencing similar symptoms for the last 6 months. The results of a cardiac workup, including 24-hour ambulatory electrocardiography and echocardiography, had been normal. 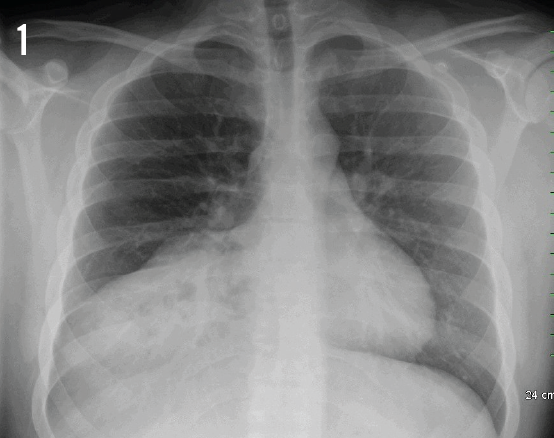 He was obese, with body mass index of 35 kg/m2. He was afebrile, with stable vital signs. On physical examination, his abdomen was mildly distended, with tenderness over the epigastric area and the right upper quadrant. Bowel sounds were sluggish, and a stool sample was positive for occult blood.

Results of routine laboratory tests, including a complete blood count, a comprehensive metabolic panel, a coagulation profile, and lactic acid test, were within normal limits.

Chest radiography and chest computed tomography (CT) were performed, the results of which are shown in Figures 1 and 2, respectively. 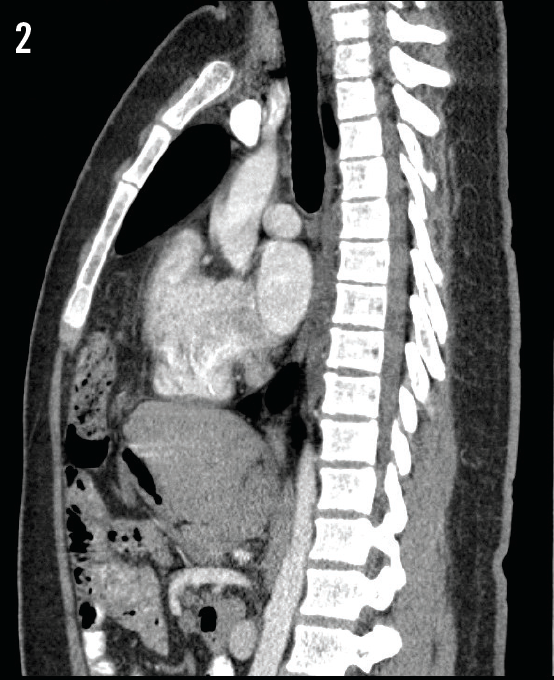 What is the source of this teenager’s symptoms?

The chest radiograph (Figure 1) showed a heterogeneous opacity on the right middle lobe obscuring the right hemithorax. CT of the chest (Figure 2) revealed the presence of a right diaphragmatic hernia. The patient was found to have right-sided incarcerated Morgagni hernia, with the entire omentum, transverse colon, and part of the hepatic flexure within the sac.

The hernia was surgically reduced, and the defect was closed. He had an uncomplicated postoperative recovery.

Embryology of the Diaphragm

The diaphragm is derived from the following structures: the septum transversum, which forms the central tendon of the diaphragm; the 2 pleuroperitoneal membranes; the muscular components from somites at cervical segments 3, 4, and 5; and the mesentery of the esophagus, in which the crura of the diaphragm develop.

The septum transversum is a thick plate of mesodermal tissue occupying the space between the thoracic cavity and the stalk of the yolk sac. This septum does not separate the thoracic and abdominal cavities completely, but leaves large openings, the pericardioperitoneal canals, on each side of the foregut. The pleuroperitoneal folds are the crescent-shaped folds that project into the caudal end of the pericardioperitoneal canals. They gradually extend medially and ventrally and, by the seventh week of gestation, fuse with the mesentery of the esophagus and with the septum transversum, thereby closing the connection between the pleural and peritoneal portions of the body cavity.1

Congenital diaphragmatic hernia (CDH) is a developmental defect of the diaphragm through which abdominal viscera are displaced into the thorax. Defects can occur at three areas of the diaphragm.

Posterolateral defects resulting from failed closure of the pleuroperitoneal membranes are the most common and lead to posterolateral diaphragmatic hernia, called a Bochdalek hernia.

Diaphragmatic hernias also can develop the esophageal hiatus, which is the least common site.2

Morgagni hernia, which was first reported by Giovanni Morgagni in 1761, is uncommon at any age. It has an annual incidence of 1% to 5%, with a female predominance.

Morgagni hernias may be unilateral or bilateral, but they occur unilaterally on the right side in approximately 90% of cases, followed by a bilateral presentation in 7% of cases. Occurrence on the left side is extremely uncommon, which could be explained by the additional support provided by the extensive pericardial attachments on that side of the diaphragm. Although a Morgagni hernia is secondary to incomplete development at the diaphragm, it also can occur secondary to trauma or any effort that increases abdominal pressure. Obesity confers higher risk.

A Morgagni hernia generally has a sac that contains subdiaphragmatic structures. In adults, the hernia sac usually contains only omental fat. In infants, the sacs can include liver, colon, and small bowel. Infants diagnosed with CDH have a high incidence of other congenital organ malformation and chromosomal anomalies such as trisomy 21, Turner syndrome, Noonan syndrome, and pentalogy of Cantrell.3,4

CDH is a well-known cause of severe respiratory distress in newborns, and it is associated with with high mortality rates in that population. CDH also can present later in life secondary to herniation of abdominal viscera through a congenital diaphragmatic defect that has been occluded by organs such as the liver or spleen.3

Figure 2. Sagittal CT of the thorax and abdomen showed a portion of bowel extending into the chest cavity, anterior to the liver.

CDH generally is asymptomatic; if symptoms do present, they usually are related to the obstruction of herniated organs and include vague gastrointestinal symptoms such as epigastric discomfort or cardiorespiratory symptoms such as dyspnea and palpitation. Right-sided CDH generally presents with respiratory symptoms, whereas both respiratory and gastrointestinal symptoms are seen equally with left CDH. Complete obstruction, incarceration, or strangulation of the hollow viscus is very rare.3

The diagnosis can be made with frontal and lateral chest radiography. However, with intermittent herniation, radiographs may appear normal. CT helps in identifying the location and contents. Other diagnostic studies such as real-time ultrasonography, gastrointestinal contrast studies, and magnetic resonance imaging also are used.

Because Morgagni hernia is at risk for incarceration and strangulation, it should be repaired soon after the diagnosis is made. The hernia typically is repaired with a transabdominal approach; minimally invasive techniques have played an increasing role in recent years.5,6

The recurrence rate is usually low, with an excellent prognosis. Our patient had done very well, with no recurrence of any symptoms in the last 5 years. n

Venkedesh Raju, MD, is a pediatric hospitalist at Children’s Hospital of Illinois and a clinical assistant professor at the University of Illinois College of Medicine at Peoria.

Shoba Theivanayagam, MD, is a gastroenterology fellow at the University of Missouri Health Care Hospitals and Clinics in Columbia.

Eric Bugaieski, MD, is a pediatric radiologist at Children’s Hospital of Illinois and an associate professor of clinical pediatrics at the University of Illinois College of Medicine at Peoria.