Roli Agrawal, MD and Sarah Kizilbash, MD
Dr Agrawal is a radiology resident and Dr Kizilbash is a pediatric hospitalist at Wayne State University School of Medicine in Detroit. 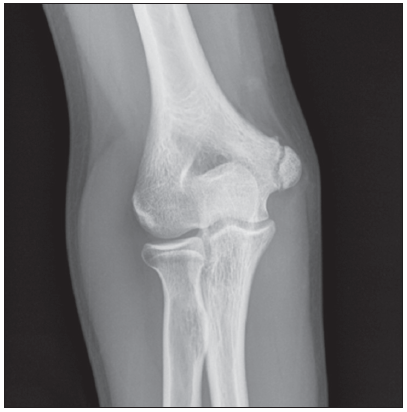 How Do You Read This Image?

A 15-year-old boy presents with pain in the medial aspect of his right elbow that began 4 to 6 weeks earlier and progressively worsened. He denies any swelling, fevers, paresthesia, pain in other joints, injury to the elbow, or change in range of motion. He is a pitcher on his school's baseball team. He has no significant medical history.

Examination reveals a healthy-looking boy, with weight and height at the 50th percentile. Pain over the medial aspect of the right elbow is noted on palpation and with resisted wrist flexion. Valgus stress testing also elicits elbow pain; however, the joint is stable. There is no elbow swelling. The patient has full range of motion.

A plain radiograph of the elbow is shown.

What do the findings suggest?

Radiology Quiz
How Do You Read This Image?
(Continued)

The radiograph shows an avulsion fracture of the medial epicondyle suggestive of little leaguer's elbow.

Little leaguer's elbow syndrome is the term used for a group of overstress injuries that result from repetitive valgus distraction forces on the medial elbow. Such forces are commonly generated during repetitive throwing motions. Repeated stress or microtrauma leads to overuse injury when the tissue damage exceeds tissue repair. The type of injury depends on the skeletal maturity. Common conditions included in this syndrome are medial apophysitis, medial epicondylar avulsion fracture, and ulnar collateral ligament injury. Compression injury to the capitellum and radial head can also occur. 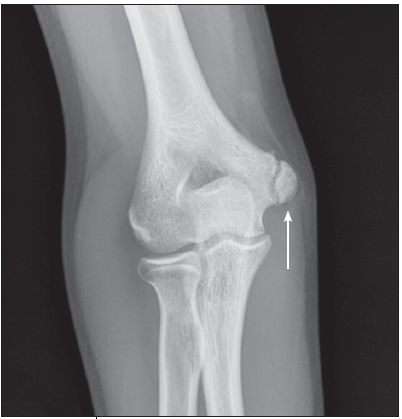 Medial apophysitis usually presents before the appearance of secondary ossification centers. The condition is common in young children (aged 5 to 8 years). Patients initially report pain after throwing that progressively becomes constant. They may also have decreased pitch velocity or control or throwing distance.

Medial epicondyle avulsion fracture often occurs in early adolescence (before 15 to 16 years) in between the appearance and fusion of the secondary ossification centers. Patients may report a sudden “pop” during a throw followed by pain. Point tenderness is elicited over the medial epicondyle. Although a fracture is usually an acute traumatic event, medial epicondyle avulsion fracture is frequently preceded by a history of medial elbow pain. Therefore, throwers who experience medial elbow pain should refrain from pitching until a thorough evaluation has been done.

Ulnar collateral ligament injury is a common cause of medial elbow pain in older teenagers (after age 16 years) with fused epicondyles. This injury can manifest as an acute ligament tear after a single valgus stress or as an overuse sprain after repetitive valgus overload.

The diagnosis of little leaguer's elbow is made clinically and should be considered even in patients with minimal symptoms. Plain radiographs may be normal or may reveal delayed or accelerated growth of the medial epicondyle, bony fragmentation, or apophyseal widening or avulsion.

Treatment consists of complete rest of the elbow for at least 4 to 6 weeks. NSAIDs may be used for pain, as needed. Throwing or pitching can be reintroduced gradually after initial rest. Most athletes are able to return to their competitive pitching and throwing at 12 weeks. Orthopedic consultation is indicated for patients whose symptoms do not improve with conservative treatment. Treatment of patients with avulsion fractures or loose cartilaginous bodies also is generally done in consultation with an orthopedic surgeon.

For prevention of little leaguer's elbow and shoulder, the American Academy of Pediatrics recommends limiting the number of pitches to 200 per week, or 90 pitches per outing. Other preventive measures include a preseason conditioning program, instruction on proper pitching mechanics, and a gradual increase in the amount and intensity of throwing. ■