What is Responsible for the Painful Lump in Her Neck?

A 42-year-old woman of Japanese descent presented with a 3-day history of a painful lump in her left neck. The patient reported a 4 lb weight loss in the past 6 months, but denies having fever, night sweats, chest pain, shortness of breath, or fatigue. She did not have any upper respiratory infection symptoms, rash, ulcers, arthralgias, or Raynaud’s phenomenon. She did have a boil in the back of her neck that was draining pus in the last week, but it has since resolved on its own.

The patient is a current half pack per day smoker and has been for the past 25 years. She had a thyroidectomy in the past for undetermined reasons, and has a history of radiation therapy to the head for the treatment of acne. She vacationed in Europe 5 months earlier.

The patient had a 2 cm soft, tender, lymph node on the posterior cervical chain on the left and some subcentimeter nodules on the right anterior chain, which were also tender to palpation. The remainder of exam was unremarkable. 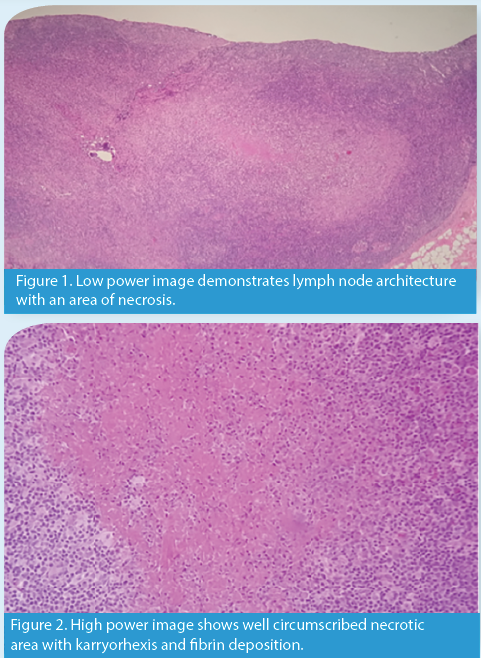 The complete blood count showed a slight normocytic anemia, with hemoglobin of 11.5 g/dL and a mean corpuscular volume of 89 fL. Her white blood cell count and platelets were within normal limits. Serum ferritin, total iron, and percent saturation were low at 4 ng/dL, 30 mcg/dL, and 7%, respectively, indicating iron-deficiency anemia. Comprehensive metabolic panel was unremarkable and lactate dehydrogenase levels within normal limits. HIV testing, hepatitis panel, and Quantiferon TB gold test were all negative. Patient was initially treated with a 1-week course of doxycycline and showed no improvement.
Follow-up CT of the neck revealed an enlarged ill-defined lymph node surrounded with hazy fat measuring approximately 1.3 cm on level 5 of the neck. There were also prominent lymph nodes on the left on level 2 of the neck. Portion of the right thyroid gland remained measuring 1.25 cm in size. Chest x-ray was within normal limits.

An excisional biopsy of the lymph node on the left side of the neck was performed and showed necrotizing lymphadenitis consistent with Kichuchi-Fujimoto disease (KFD). Follow-up testing including antinuclear antibodies (ANA) and anti-smith (anti-Sm) antibodies were negative, but anti-double stranded DNA
(anti-dsDNA) antibodies were mildly positive.

First diagnosed in 1972, KFD, also known as histiocytic necrotizing lymphadenitis, is a rare, self-limited condition that is most commonly seen among young Asian women.1 Patients with this condition can often present with a variety of symptoms, including tender lymphadenopathy, fever, weight loss, night sweats, elevated erythrocyte sedimentation rate, and leukopenia.2

The etiology of this disease is not well understood, but is likely caused by a viral or an autoimmune process. Viruses such as Epstein-Barr virus, HIV, herpes simplex virus, parvovirus B19, and cytomegalovirus have been associated with this disease.3

There have been a few cases of KFD associated with systemic lupus erythematosus (SLE). In a 2007 study by Kucukardali et al, 32 of the 244 cases of KFD were associated with SLE. Of these, 18 had KFD and SLE simultaneously, 6 had SLE later, 4 had a previous diagnosis of SLE, and 4 did not meet enough criteria for the definition of SLE and were accepted as incomplete SLE.1

With a broad scope of possibilities, conditions such as lymphoma, thyroid, lung, or metastatic cancer, tuberculosis, sarcoidosis, and other atypical infections need to be considered.4 A definitive diagnosis of KFD can only be determined through the pathology of an open biopsy of the affected lymph nodes.5 Microscopically, KFD often shows alteration of the normal nodal architecture, with cortical and paracortical foci with necrosis and a histiocytic cellular infiltrate.6 Coagulative necrosis and abundant eosinophilic apoptotic karyorrhectic debris is also seen.7 Pathological diagnosis of KFD requires the presence of crescent-shaped histiocytes and plasmacytoid monocytes with scattered karyorrhexis.7

KFD is usually self-limited and symptoms resolve within 1 to 4 months. In some patients with this condition, SLE may manifest in the future and patients require follow-up for several years. There is no specific treatment for KFD and management usually includes symptomatic measures aimed to relieve local and systemic complaints.6 Patients with severe or persisting symptoms have been treated with glucocorticoids.8

In our case, the patient was sent to a rheumatologist who did not feel that she met the criteria for SLE despite her mildly positive anti-dsDNA. Repeat autoimmune testing 4 months later showed negative ANA, dsDNA, and anti-Sm antibodies.

The author explains the case in this podcast: