What Is This Pigmented Lesion on a Teenager’s Arm?

A 17-year-old patient presented with a pigmented lesion on his left arm. He reported that the lesion had been first noted approximately 5 years ago and had slowly increased in size with time. The lesion was asymptomatic. He had 12 melanocytic nevi elsewhere on the body. The first one had been noted during late childhood, and the number of nevi had increased sharply at adolescence. The patient was otherwise in good health. There was no family history of skin cancer.

Physical examination revealed a flat, dark brown lesion with an irregular border, asymmetric shape, and color variegation on the left arm. The lesion measured 5 × 8 mm. Twelve acquired melanocytic nevi measuring 1 to 3 mm in diameter were noted on the trunk and the extremities. Severe xerosis also was noted over the entire skin. The rest of the physical examination findings were normal. 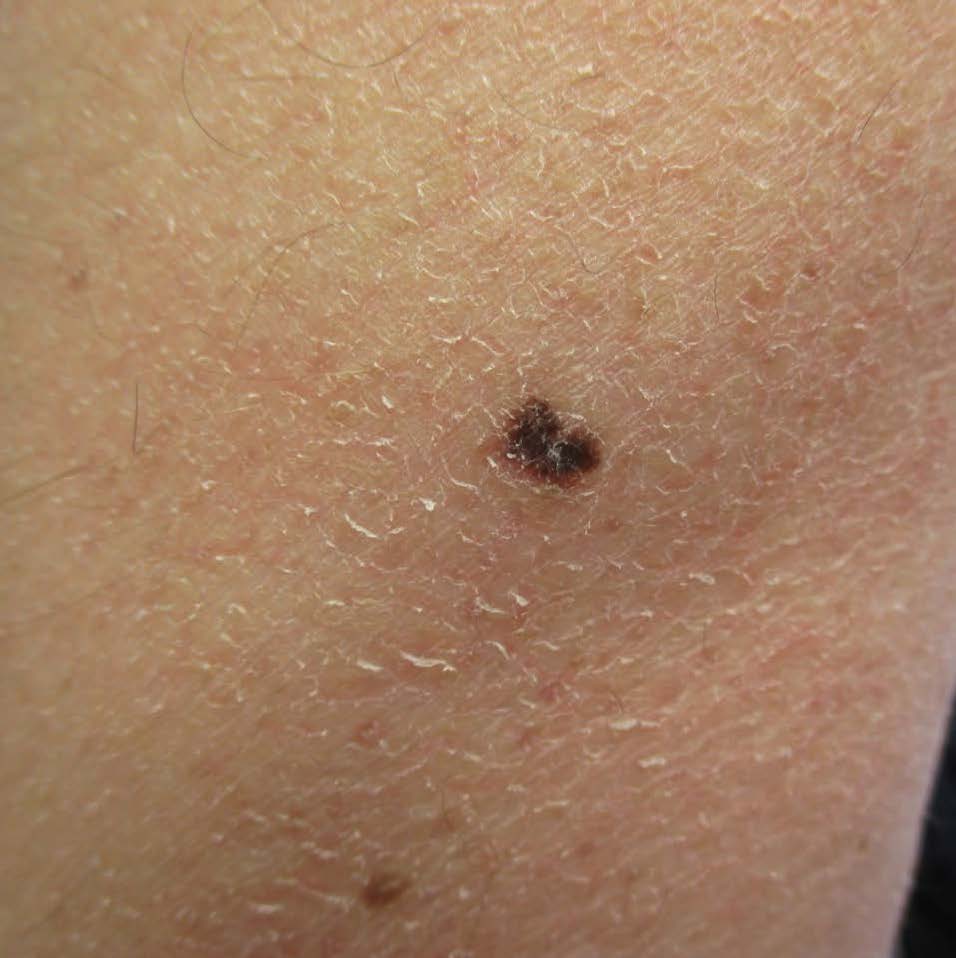 A dysplastic nevus, also known as an atypical nevus or a Clark nevus, is an acquired melanocytic lesion characterized by asymmetry, size greater than 5 mm, an irregular or ill-defined border, color variegation, and evolution.1,2 The condition was first described and reported by Clark and colleagues in 1978.3

The prevalence in the white population ranges from 2% to 8%.4 The condition is more common in fair-skinned individuals.4 The onset usually begins at puberty.5 The nevi continue to appear throughout life. These lesions are most common in individuals between 30 and 40 years of age.5

The World Health Organization has enumerated major and minor criteria for the histologic diagnosis of dysplastic nevi.8 The major criteria are: (1) atypical nevomelanocytic proliferation in the basement membrane zone, which must extend at least 3 rete ridges beyond the dermal component; and (2) organization of this proliferation in a lentiginous or epithelioid-cell pattern. The minor criteria are: (1) lamellar fibrosis or concentric eosinophilic fibrosis; (2) neovascularization; (3) dermal inflammatory response; and (4) fusion of rete ridges. Diagnosis is established when both major criteria and at least 2 minor criteria are met. The melanocytes exhibit nuclear atypia, especially nuclear pleomorphism and anisochromatism, most obvious at the dermoepidermal junction and in the subepidermal area.9 The variability in size, shape, and staining intensity of the nuclei, rather than their absolute size, is most characteristic of dysplastic nevi.9

Dysplastic nevi usually arise during adolescence, although the condition also has been described in prepubertal children.7 The ABCDE rule can be useful in the diagnosis of an atypical nevus. The nevus is considered dysplastic when it has asymmetry (one half of the lesion does not match the other half in terms of shape and color); a border that is irregular and/or indistinct; color variegation (with shades of tan, brown, and black); a diameter greater than 5 mm; and evolution over time, usually in the direction of greater atypia.1,2 The lentiginous variant has a flat surface and a dark brown to black color. The “fried egg” or “target” variant has a prominent macular component with a papular center. The mammillated variant has a cobblestone surface.1,10

Dysplastic nevi most frequently are found on the trunk, especially the upper back, and less commonly on the extremities.1,10 Nevertheless, they can be found anywhere on the body, including sun-protected areas such as the scalp, breasts, and buttocks.10 For some unknown reason, dysplastic nevi rarely are seen on the chronically sun-exposed skin of the face and hands.1 Most dysplastic nevi are solitary and sporadic, although they can be multiple and familial. Patients with dysplastic nevi tend to have multiple melanocytic nevi, the majority of which are not dysplastic.

Dysplastic nevus syndrome is characterized by the presence of 100 or more melanocytic nevi, with at least one nevus greater than 8 mm, and at least one clinically dysplastic nevus.1,10 FAMMM, on the other hand, is characterized by the occurrence of melanoma in one or more first- or second-degree relatives; the presence of a large number of melanocytic nevi (often more than 50), with many having atypical clinical features; and melanocytic nevi that demonstrate distinct histopathologic features.4

The diagnosis mainly is a clinical one and can be aided by dermoscopy. Dermoscopic findings include an irregular pigment network that is focally prominent and terminates abruptly or gradually at the periphery in some areas, along with irregular diffuse pigmentation, depigmented areas, brown globules, and, rarely, regularly distributed black dots.5

The main differential diagnosis is a melanoma. In general, dysplastic nevi are relatively symmetric, and the borders are less irregular and more circumscribed compared with those of melanomas. The color of dysplastic nevi usually is less variable than that of melanomas and does not include white, gray-blue, or red, which may signify partial regression of a melanoma.11 A history of rapid change in size, shape and color of a preexisting nevus or a newly developed nevus in an individual older than 40 years of age is suggestive of a melanoma.1 The “ugly duckling sign” (a lesion that is out of step with other nevi in terms of size, shape, color variegation, and evolution) is useful clinically, particularly when looking at a large number of moles. Dermoscopically, a depigmented scar-like area, multiple homogeneous areas (particularly when variable in size or when more than 25% of the lesion is involved), a whitish veil, radial streaming, and black dots of variable size and irregular distribution suggest a melanoma.1,11

The nevus can be cosmetically unsightly and an esthetic concern if it occurs in an exposed area. Patients with dysplastic nevi have a threefold to 20-fold higher risk of developing melanoma than do age-adjusted individuals without dysplastic nevi.1 The risk of melanoma increases in a dose-response fashion with the number of dysplastic nevi. The risk is greatest if there is a personal or family history of melanoma.

Dysplastic lesions may become more or less atypical or remain stable throughout life.5

A detailed history should be taken, including a personal history of previous skin cancers, prior removal of other suspicious nevi, blistering sunburns, and ultraviolet radiation exposure (including tanning salons), as well as a family history of dysplastic nevus and melanoma.2 A full-body skin examination is advised. The number of nevi and dysplastic nevi should be documented.

Total-body photographs and close-up photographs of dysplastic nevus alongside a ruler, compared every 3 to 4 months for possible changes, as well as periodic dermoscopy, would facilitate earlier detection of melanoma.

Sun avoidance during hours of peak ultraviolet radiation intensity (11 am to 4 pm) and the use of broad-spectrum sunscreens and protective attire, including sunglasses and sun-shielding apparel (eg, wide-brimmed hats) when outdoors cannot be overemphasized.2

Prophylactic excision of a dysplastic nevus is not warranted, since most dysplastic nevi do not progress to melanoma.10 However, if melanoma cannot be ruled out (as is often the case), an excision biopsy with a 2-mm surgical margin should be performed, and referral to a dermatologist for assessment should be considered.