What is this morbilliform eruption?

Kirk Barber, MD, FRCPC-Series Editor: Dr Barber is a consultant dermatologist at Alberta Children's Hospital and clinical associate professor of medicine and community health sciences at the University of Calgary in Alberta. 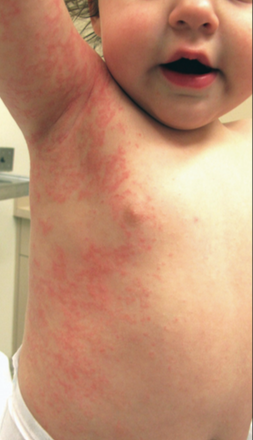 Case: A 2-year-old girl with an erythematous rash of 1 week’s duration is brought to clinic. The rash, which began as a few small pink bumps on the right chest wall, now encompasses the entire right flank, right axilla, and right upper inner arm. The mother has noticed the girl scratching the area but reports no sleep disruption because of pruritus.

The child had a mild upper respiratory tract infection 1 week before the rash appeared; however, she was afebrile and had no changes in appetite or behavior.

What is this morbilliform eruption?

Unilateral laterothoracic exanthem, also called asymmetrical periflexural exanthem of childhood (APEC), is a benign, self-limited skin eruption of unknown cause that occurs in children—although cases in adults have been reported.1 Girls are affected more often than boys, and the average age of onset is 2 to 3 years.

A viral etiology has been suspected given the morphological similarity to typical viral exanthems and its prevalence in spring and winter months; however, no specific causative virus has been identified. Few cases have been associated with adenovirus, parvovirus B19, Epstein-Barr virus, and parainfluenza virus by serology.2

APEC can be preceded by fever and upper respiratory tract or GI illness in up to three quarters of patients.2 Pruritus is often present but is mild.

The clinical presentation is striking and characteristic. Initially, small erythematous papules with a surrounding white halo appear on the lateral chest wall or near a flexural area. They can coalesce into small plaques and spread centrifugally on one side. Rarely, the lesions spread to the contralateral side. Sometimes the papules are eczematous with scale, but more often the eruption is morbilliform or scarlitiniform. The face, palms, soles, and mucous membranes are spared.2

Skin biopsy is not recommended because the findings (mild epidermal spongiosis, superficial perivascular and perieccrine lymphocytic infiltrate) are nonspecific. Contact dermatitis, scarlet fever, and Gianotti-Crosti syndrome are high on the differential diagnosis list.

Treatment of APEC is symptomatic. Any pruritus can be treated with oral antihistamines and bland emollients; topical corticosteroids are usually not helpful.2 This child’s parents were reassured that the rash would spontaneously resolve in about 2 to 6 weeks and leave no long-term sequelae.