What Is Causing a Woman’s Massive Hemoptysis and Imaging Abnormalities?

A 35-year-old woman presented to the emergency department (ED) with massive hemoptysis. She had experienced a coughing fit with bloody sputum at home, which quickly had progressed to frank hemoptysis totaling 500 mL over the course of 12 hours.

The patient’s past medical history was notable for a recent diagnosis of exercise-induced asthma, which she had received after having experienced dyspnea on exertion; the condition had responded to albuterol via an inhaler. She also reported having had multiple bouts of pneumonia during childhood. She denied current chest pain, alcohol abuse, recent sick contacts, or recent respiratory infections. She had quit smoking approximately 6 years ago, and she denied occupational exposures. Six months prior to this ED visit, she had had an episode of mild hemoptysis in the setting of a respiratory infection, with resolution of hemoptysis upon treatment with antibiotics.

In the ED, the patient had an oxygen saturation of 93% on room air and normal vital signs. Pulmonary examination revealed mild respiratory distress with crackles and coarse breath sounds bilaterally, more pronounced in the right anterior apex. No source of bleeding was noted in the nasopharynx. Cardiac and abdominal examination findings were unremarkable.

Results of a blood chemistry panel, a complete blood cell count, and coagulation studies were within normal limits.

A chest radiograph (Figure 1) demonstrated asymmetric lung volumes, with the left larger than the right, and a mild left-to-right shift of the trachea and cardiomediastinal silhouette. The left pulmonary artery branches appeared enlarged. Further evaluation was pursued with computed tomography angiography (CTA) of the chest, the results of which are shown in Figure 2.

In addition to the abnormalities demonstrated on radiographs (Figure 1), transaxial chest CTA (Figure 2) showed diminutive right pulmonary vasculature with ground-glass opacities throughout the asymmetrically small right lung. The left pulmonary vasculature was enlarged due to increased vascular flow through the left lung, which otherwise appeared normal.

Coronal maximum intensity projection (MIP) of the chest CTA demonstrated the absence of the right pulmonary artery from the main pulmonary artery and collateral supply of the diminutive right lung pulmonary vasculature through enlarged bronchial arteries (Figure 3). The right pulmonary veins were hypoplastic. Bronchiectasis and a pneumatocele were present within the right upper lobe. A ventilation/perfusion (V/Q) scan showed that the right lung received only 2.2% of total lung perfusion but received 51.2% of total lung ventilation (Figure 4). 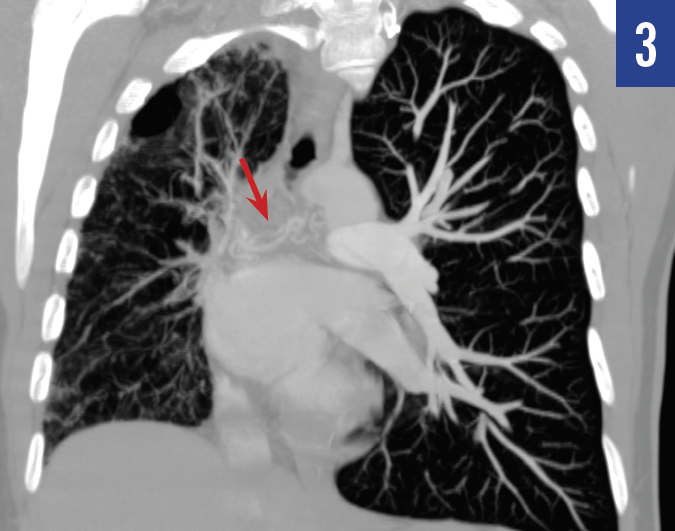 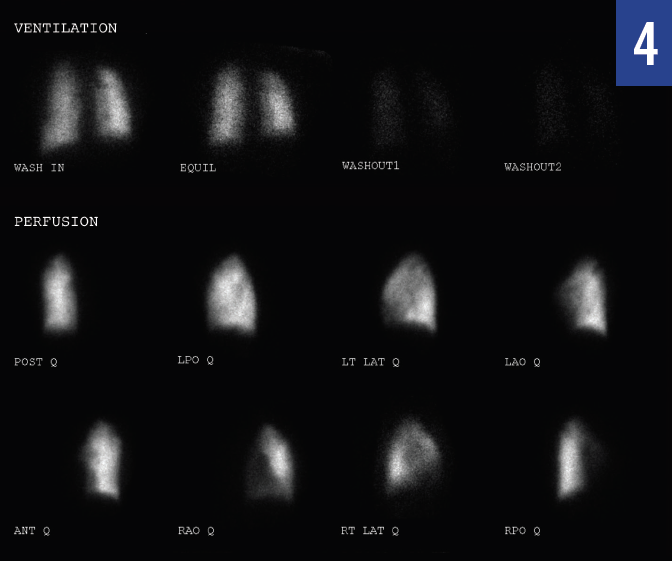 Figure 4. V/Q scan showed essentially equal ventilation in the right and left lungs, and far less perfusion of the right lung relative to the left lung.

Based on these findings, the patient received a diagnosis of congenital right unilateral pulmonary artery agenesis (UPAA). She was admitted to the intensive care unit due to her recurrent episodes of hemoptysis. The results of diagnostic bronchoscopy revealed a fresh blood clot in the bronchus intermedius and indicated the right middle lobe as the possible source of the bleeding.

UPAA is a rare congenital abnormality, occurring as an isolated defect in approximately 1 in 200,000 individuals.1 It can be traced to an involution of the proximal sixth aortic arch during embryogenesis, leading to a failure in the normal connection of the extrapulmonary trunk to the intrapulmonary vasculature.2 Typically, this anomaly is seen in conjunction with congenital heart defects such as tetralogy of Fallot, coarctation of the aorta, or septal defects.3 When it occurs as an isolated defect, symptoms are often nonspecific, leading to frequent misdiagnosis and considerable delay in detection.4 These nonspecific symptoms commonly include recurrent pulmonary infections, decreased exercise tolerance, and mild dyspnea on exertion.

Hemoptysis is an infrequent presenting symptom of UPAA. In one review,5 18 of 92 patients (20%) had hemoptysis prior to diagnosis. This can be attributed to the systemic-to-pulmonary collateral arteries that are forced to develop in the early stages of life. These collaterals typically arise from bronchial arteries, although they also can stem from intercostal, subdiaphragmatic, subclavian, and even coronary arteries.6 As pulmonary blood flow is shunted through this thin-walled collateral network, rupture of vessels can occur, leading to hemoptysis.

Approximately 15% of patients with UPAA may reach as late as the seventh decade of life without demonstrating any notable symptoms.7 In these cases, the diagnosis of UPAA is most often made after incidental findings on chest radiographs, leading to additional imaging studies. Presenting signs on chest radiographs may include decreased volume of the affected lung with a small hilum, hyperexpansion of the contralateral hemithorax with increased vascularity of the lung, an ipsilateral shift of the mediastinum, and opacities or possible rib notching due to collateral vessels.4,8

Typically, pneumonectomy and embolization of collateral vessels are recommended for patients with recurrent pulmonary infections, hemoptysis, or pulmonary hypertension. If UPAA is discovered early in childhood, procedures have been successful in reestablishing blood flow in occult pulmonary arteries.5 Such revascularization procedures are not encouraged in older patients, whose vessels are usually heavily scarred and prone to hemorrhage.

In this patient’s case, an interventional radiologist performed embolization in multiple bronchial arteries and in the right inferior phrenic artery to halt her acute bleeding. After completion of the procedure, her hemoptysis resolved, and she had stable hemodynamic measures for the remainder of her hospitalization. A consultant cardiothoracic surgeon recommended pneumonectomy to prevent future episodes of hemoptysis. The patient underwent elective right pneumonectomy 12 weeks later without complications.

Eight weeks after the right pneumonectomy, the patient denied having hemoptysis and any further dyspnea on exertion. Subsequently, she has had multiple upper respiratory tract infections but no repeat episodes of hemoptysis.

Matthew Levin, MD, is in the Department of Medicine at the University of California (UC), San Diego, in La Jolla, California.

Chun Chieh Kevin Luo, MD, is in the Department of Medicine at UC San Diego in La Jolla, California.

Alexander M. Vezeridis, MD, PhD is a resident physician in the Department of Radiology at UC San Diego in La Jolla, California.

Heather L. Hofflich, DO, is in the Department of Medicine at UC San Diego in La Jolla, California.