What Is Causing This Woman’s Longstanding Pruritic Upper-Body Rash?

Stephen Colden Cahill, DO, and Schield Wikas, DO

At the end of summer, a 37-year-old woman presented for consultation about a 5-year history of a pruritic rash. The rash originally had started on her neck and had slowly progressed over her face, chest, shoulders, and arms. She reported having similar lesions over the past 5 years that had waxed and waned in intensity. The rash seems to improve (but is still present) during the winter months.

She had been seen 1 month ago by her primary care physician, who performed laboratory tests, the results of which showed an elevated C-reactive protein level of 31.3 mg/L (reference range, 0-5 mg/L); findings of a complete blood cell count with differential were normal, and the results of an antinuclear antibody test were negative for autoimmune disorders. A 7-day prednisone taper and over-the-counter fexofenadine had led to mild short-term relief of the symptoms, but the rash promptly returned.

She denied taking any medications or recent herbal supplements. She could not specifically associate the lesions with sun exposure. She denied any systemic symptoms other than low-back pain, which had been an ongoing problem for several years. She was an active 1 pack per day smoker and an occasional social drinker, and she denied any illicit or recreational drug use. Her past medical history was significant for depression, degenerative joint disease, and spinal stenosis.

On physical examination, she had multiple scattered, erythematous, nonscaly papules ranging from 0.5 to 1 cm and occasionally coalescing into annular plaques. The lesions were located in a photodistributed pattern over her face, neck, shoulders, upper back, and arms (Figures). No wheal could be provoked by stroking or rubbing the skin.

What is responsible for the woman’s lesions?

Answer and podcast on next page.

A punch biopsy of the lesions was obtained, the histologic test results of which are described in Figures 3 and 4. 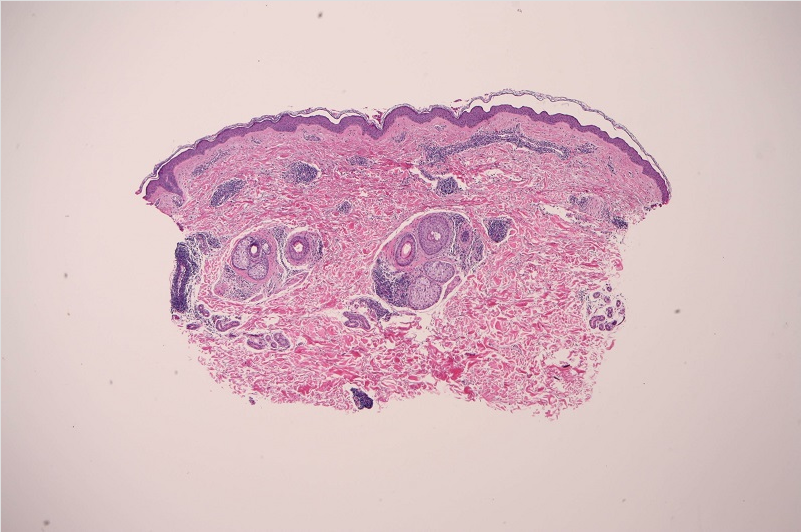 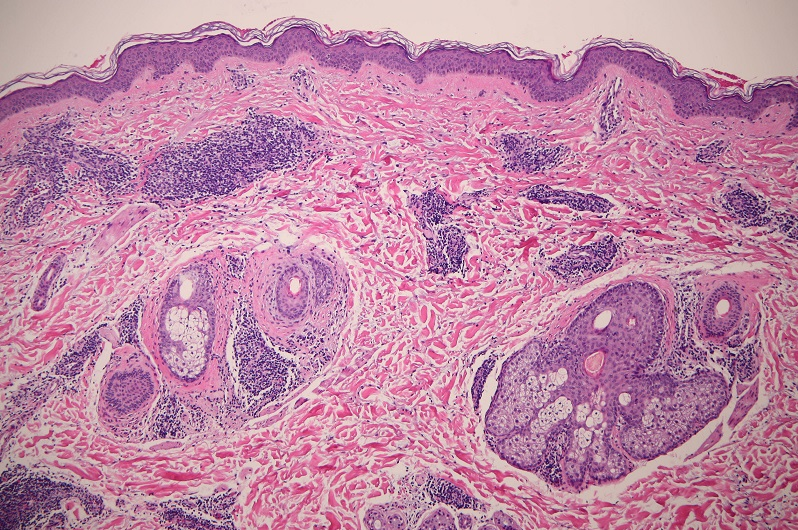 Based on the patient’s history, physical examination findings, and laboratory test results, she received a diagnosis of TLE.

TLE is an uncommon variant of chronic cutaneous lupus.1,2 It is more common in young women,3 and it typically presents as a rash with a photodistributed region on the face, V-neck, chest, back, and extensor surfaces of the upper arms. The lesions of TLE are commonly erythematous, nonscaly papules, plaques, and nodules. Patients usually have photosensitivity but typically are otherwise asymptomatic. Photosensitivity and photodistributed rash should prompt placing TLE in the list of differential diagnoses.

Most patients have negative or normal serologic test results for lupus and other autoimmune disorders,3 as was the case with our patient’s laboratory test results, including ANA and anti-Ro/SSA and anti-La/SSB antibodies. A majority of patients with TLE do not have concurrent systemic diseases.

Common findings on histopathologic tests include increased dermal mucin and superficial and deep perivascular and periadnexal lymphocytic infiltrates,2-4 as in our patient’s case. Interface changes are uncommon in TLE.2-4 Both SLE and discoid lupus erythematosus have involvement of the dermal epidermal junction with vacuolar degeneration and necrotic keratinocytes.2,4

In general, the lesions of TLE are self-limited with a good prognosis. The current treatment recommendation is antimalarial agents, specifically hydroxychloroquine. Our patient was placed on hydroxychloroquine, 200 mg twice daily. In addition, smoking cessation was advised, given that smoking can worsen cutaneous lupus. UV-protective measures were also stressed to our patient. At this writing, her clinical improvement was pending follow-up.

To listen to the podcast featuring this author, click here.

Stephen Colden Cahill, DO, is a dermatology resident at Tri-County Dermatology in Canton, Ohio.

Schield Wikas, DO, is a dermatologist and the dermatology residency program director at Tri-County Dermatology in Canton, Ohio.