What Is Causing This Woman’s Chronic Knee Pain?

A 26-year-old female comes to your office complaining of chronic left knee pain that has worsened over the last one to two weeks. She describes the pain as, “throbbing and aching.” The patient denies a history of trauma and revealed that she had been seen by a previous physician and instructed to do physical therapy. This did not improve the pain, though slight relief was attained with the use of nonsteroidal anti-inflammatory drugs. This patient’s medical history does include systemic lupus erythematosus (SLE), for which she is currently receiving medical therapy. She has recently increased the dosage of her prednisone as her symptoms related to SLE have exacerbated.

Physical exam reveals mild distress related to her knee pain. Though patient is mildly obese, all of her vital signs are within normal limits. The physical exam of the left knee demonstrates slightly reduced active range of motion related to pain. Passive range of motion is full. No specific position makes the pain better or worse. Stress tests to assess the ligaments are negative. Two views of the left knee are obtained in further investigation (Figures 1 and 2). The frontal and lateral conventional radiographs of the knee demonstrate punctate areas of sclerosis in the distal femur and proximal tibia. On the lateral view there is no evidence of a joint effusion. 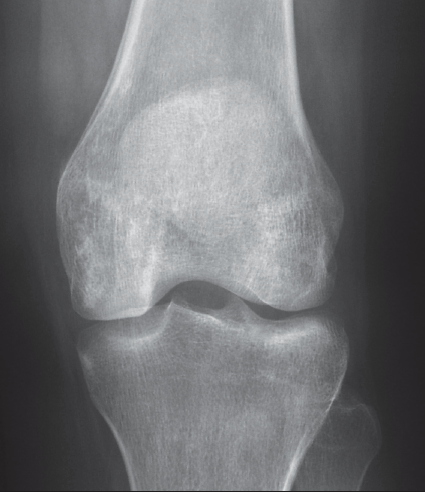 Figure 1. A frontal radiograph of the knee demonstrates punctate areas of sclerosis 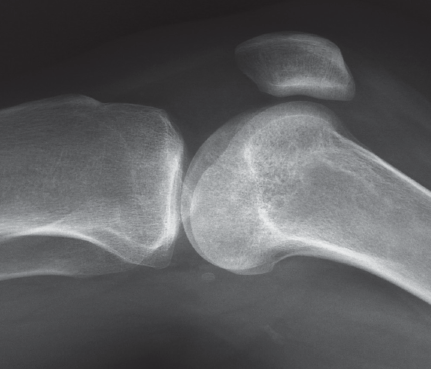 Figure 2. A lateral radiograph of the knee demonstrates punctate areas of sclerosis and the absence of a joint effusion.

The abdominal bowel gas pattern is unremarkable. No evidence of pulmonary edema is seen.

Due to the long-standing nature of the pain MRI of the knee was ordered. T1 and T2 (Figures 3-6) weighted images demonstrate serpiginous areas of increased and decreased signal paralleling each other consistent with the double line sign, which is classic for medullary infarcts of bone. 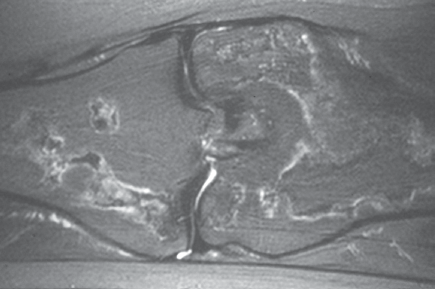 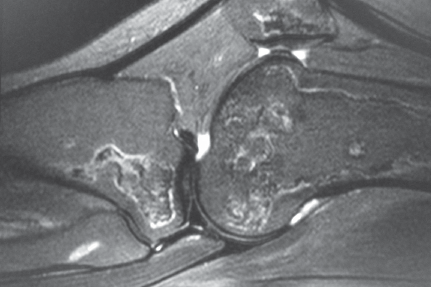 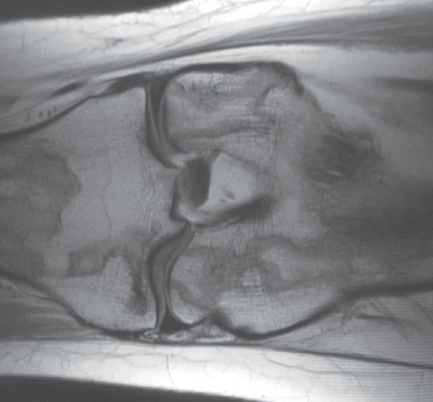 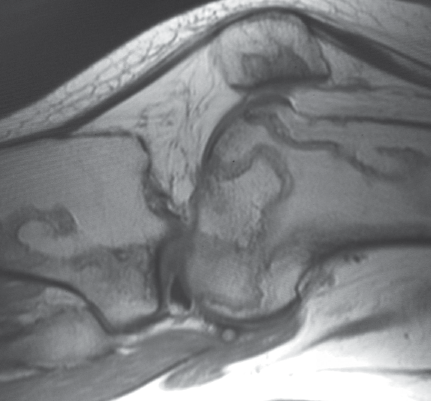 Bone infarcts can be asymptomatic on presentation. However, in some patients, there is significant focal tenderness limited range of motion and occasionally a fever. The medullary infarcts, depending upon location can cause weakening of the underlying parent bone and lead to fractures. This is particularly true in osteonecrosis of the femoral head, a related disorder. Many times the most important part of making the diagnosis of a medullary infarct is to help exclude other pathology. For this patient, optimal treatment was observation and pain management, tactics that led to marked improvement in his condition. Going forward, reducing steroid therapy will be a priority.

There can be confusion when referring to medullary infarcts. The term bone infarct can also be applied. These terms refer to abnormalities in the diaphyseal and metaphyseal regions of bone. In the region of the epyphysis the term osteochondrosis is preferred.

Medullary infarcts, osteonecrosis and osteochondrosis are thought to be very similar diseases in different locations.

A bone infarct occurs when the blood supply is disrupted. There are many causes of bone infarcts to include trauma, hemoglobinopathies, particularly sickle cell disease, steroid therapy, pancreatitis, gout, Gaucher's disease, and alcohol abuse to name a few.

There is typically a delay between the actual event of the infarct and visualization of radiographic abnormalities. Often the findings on conventional radiographs can be bilateral and symmetrical typically consisting of regions of sclerosis. Osteonecrosis will have a different radiographic appearance with regions of subchondral lucency associated with regions of sclerosis.  MRI is a very sensitive and specific modality for the diagnosis.  It can help identify the abnormality prior to the conventional radiographs being positive and give the full extent of the disease.  MRI also has the advantage of identifying other pathology in the differential diagnosis.