What Is Causing This Teenager’s Nail Dystrophy, Leukoplakia, and Hepatic Cirrhosis?

A 15-year-old girl presented with diarrhea, abdominal pain, and hematochezia. Her past medical history was significant for pulmonary fibrosis, aplastic anemia that required a bone marrow transplant at the age of 3 years, and nail dystrophy and leukoplakia at the age of 5 years (Figures 1 and 2). She also had dental anomalies that consisted of teeth with short roots and a history of developing multiple dental caries requiring numerous restorations (Figure 3).

The girl was admitted for evaluation, and during 9 days of hospitalization she underwent a thorough evaluation that included blood work, stool tests, and imaging studies. Her diagnostic workup revealed a positive rotavirus antigen in the stool, pancytopenia on complete blood count, and liver fibrosis/cirrhosis with early esophageal venous congestion found on computed tomography scan.

The girl underwent an upper endoscopy, but the results were unremarkable and did not show evidence of esophageal varices. In an effort to identify the source of bleeding, we conducted further investigations using capsule endoscopy and extended upper endoscopy, which revealed jejunal ectasia and congestion on biopsies. The patient then underwent extensive hepatic workup consisting of serologic and biochemical testing for metabolic, infectious, and autoimmune diseases. The results of all these evaluations were negative. Laboratory test results indicated an alanine transferase level of 30 U/L, which was within reference range, and an aspartate aminotransferase level of 74 U/L (reference range 8-43 U/L). In addition, laboratory test results indicated prolonged prothrombin time, hypoalbuminemia, and unremarkable partial thromboplastin time. 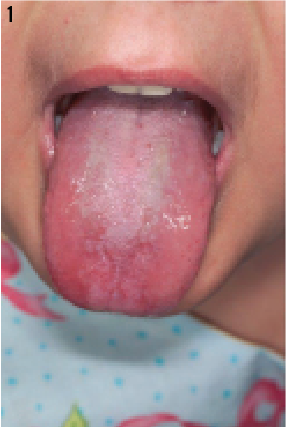 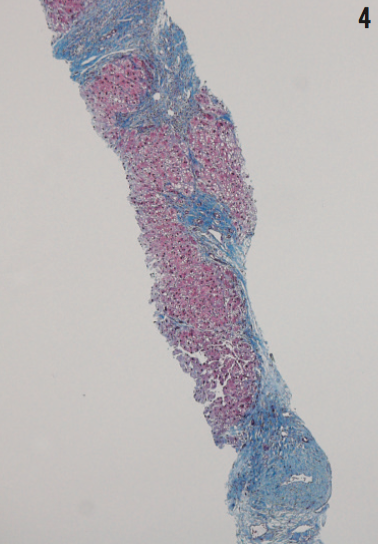 What explains these symptoms?

The patient was diagnosed with dyskeratosis congenita, a rare inherited disorder of telomerase function that can be related to several mutations: DCK1, TINF2, TERT, RTEL1, NOP10, NHP2, CTC1, and TCAB1.1  Telomerase enzyme maintains stability of chromosomal ends, so its proper function is essential in highly regenerative tissues such as skin and bone marrow.2 A triad of nail dystrophy, skin pigmentation, and oral leukoplakia is seen in most cases.

Dyskeratosis congenita presentation varies significantly from one patient to another, but in the case of our patient, nail dystrophy and oral leukoplakia were the signs that led to the diagnosis. In some cases, dyskeratosis congenita can present with impaired proliferation of hemopoietic stem cells leading  to aplastic anemia and bone marrow failure. In addition, loss of telomerase function can be associated with pulmonary fibrosis as well as dyskeratosis of skin and nails. Idiopathic liver cirrhosis presenting as portal hypertension has been described in a few cases, and other cases include reports of dental anomalies, genitourinary abnormalities, osteoporosis, and ophthalmic manifestations.3,4

Dyskeratosis congenita patients tend to have a high risk of developing different types of malignancies, raising the importance of early diagnosis and anticipation of tumor development on follow-up visits. The prognosis for dyskeratosis congenita is poor, and the condition is considered fatal in the late teens and early twenties. Bone marrow failure and pulmonary fibrosis are the usual cause of death in this group, and hepatic cirrhosis and portal hypertension are late manifestations of the disease. There is no effective therapy for dyskeratosis congenita at present.

Ahmad Alsafadi, MB, BcH, is a research fellow in the division of pediatric gastroenterology and hepatology at the Mayo Clinic in Rochester, Minnesota.

Imad Absah, MD, is an assistant professor of pediatrics at the College of Medicine at Mayo Medical School and is from the division of pediatric gastroenterology and hepatology at the Mayo Clinic in Rochester, Minnesota.

Mounif El-Youssef, MD is an associate professor of pediatrics at the College of Medicine at Mayo Medical School and is from the division of pediatric gastroenterology and hepatology at the Mayo Clinic in Rochester, Minnesota.