What Is Causing This Neonate’s Intractable Postprandial Vomiting?

A girl was born to a 27-year-old gravida 3, para 3 mother and was delivered vaginally at full term with a birth weight of 3620 g. Birth history, including the mother’s prenatal care, was uneventful. There were no complications in adaptation to postnatal life, and the neonate was discharged home with her mother on day 2 of life.

However, the girl had emesis that had persisted since birth, and she had visited her pediatrician multiple times for close monitoring of her weight. During these visits, her formula had been changed and ranitidine had been prescribed for possible gastroesophageal reflux, but her symptoms has persisted. Abdominal ultrasonography ordered by her pediatrician 2 weeks after birth showed no evidence of pyloric stenosis or duodenal atresia.

On day 17 of life, the girl was referred to our hospital, and she presented with failure to thrive secondary to intractable postprandial vomiting that was nonbloody and that was sometimes bilious.

On admission, she was 17% below her birth weight. Physical examination revealed mild dehydration, but findings were otherwise unremarkable. No abdominal olive-shaped mass or peristaltic waves were observed, and the abdomen was not distended to palpation. Laboratory test results showed a hypokalemic hypochloremic metabolic alkalosis. An upper gastrointestinal (GI) series showed an abrupt cutoff of contrast in the second region of the duodenum with proximal duodenal dilation, suggestive of complete duodenal obstruction (Figure). 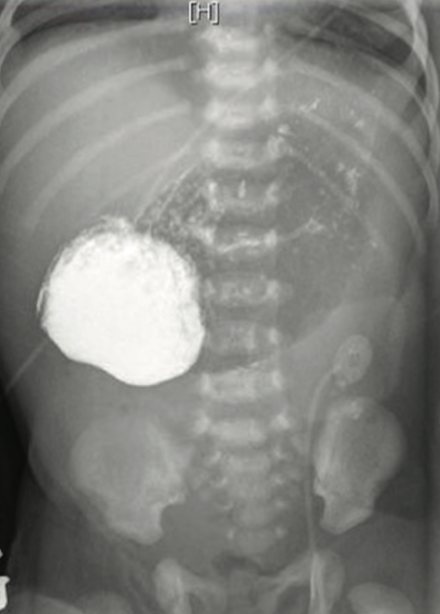 What could be causing this neonate’s symptoms?

The girl underwent exploratory laparotomy. Although a diagnosis of duodenal atresia was suspected, an annular pancreas was discovered intraoperatively, and the patient had a successful duodenoduodenostomy. Significant dilatation of the stomach and first portion of the duodenum was also observed. The postoperative course was uneventful, and the girl began oral nutrition on postoperative day 3. By postoperative day 5, her weight had increased 6% from admission.

Upper gastrointestinal series showing abrupt cutoff of contrast in the second region of the duodenum, suggestive of complete obstruction.

Annular pancreas is an uncommon congenital anomaly that is mostly asymptomatic and reported with greater frequency in the adult population.1-3 In an affected neonate, symptoms can include feeding intolerance, vomiting, and abdominal distention.4,5 The true prevalence of annular pancreas is unknown, but some studies estimate it to be approximately 1 per 20,000 live births.6,7 About two-thirds of cases are associated with other congenital anomalies, which include trisomy 21, tracheoesophageal fistula, esophageal atresia, imperforate anus, and Hirschsprung disease.6,8 When present, pancreatic tissue completely surrounds the duodenum in 25% of cases, and over half of these are generally associated with duodenal obstruction.6 In these cases, emergent surgical correction with surgical bypass, such as a duodenostomy, is indicated.9

However, as illustrated in our case, results of an initial radiologic evaluation can be unremarkable. In these cases, careful physical examination is paramount in establishing a diagnosis. When an obstructive process is still suspected, but initial imaging and physical examination findings are unclear, an upper GI series and/or a computed tomography scan, as well as immediate pediatric surgery consultation, is warranted.10

Malnutrition and failure to thrive resulting from uncorrected intestinal obstruction can lead to severe, irreversible developmental and cognitive deficits in an affected neonate, but these conditions can be prevented through early careful assessment, a high index of suspicion, and application of appropriate interventions.

Regina Yu, MD, is a resident in the department of pediatrics at the University of Texas Health Science Center McGovern Medical School at Houston.

Carlos A. Pérez, MD, is a resident in the department of pediatrics, division of child neurology, at the University of Texas Health Science Center McGovern Medical School at Houston.

Monaliza S. Evangelista, MD, is an assistant professor in the department of pediatrics, division of community and general pediatrics at the University of Texas Health Science Center McGovern Medical School at Houston.