What Is Causing This Girl’s Diplopia, Decreased Hearing, and Vomiting?

A previously healthy 14-year-old girl presented with a history of subacute onset of double and blurred vision. She reported that the change in her vision persisted for a few days and became more notable. After the progressive vision changes, she began to feel as if the “world was spinning,” and she experienced recurrent bouts of nausea and vomiting. Additionally, she had awoken the morning of presentation unable to hear from her left ear.

The physical examination revealed a pale, ill-appearing girl who was nontoxic. Vital signs and general examination findings were unremarkable. On neurologic examination, the patient was found to have bilateral, right-beating, horizontal, nystagmus that was exacerbated with rightward gaze. She had reduced hearing on the left side to finger rub. Additionally, her reflexes were increased on the left side, and she had mild left-sided dysmetria. Her gait was ataxic. 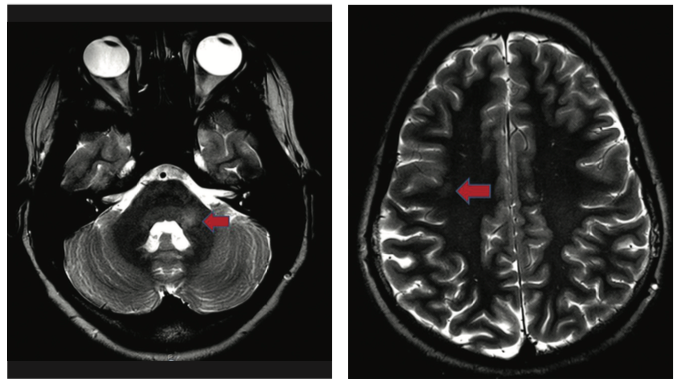 Laboratory test results were within reference ranges. Lumbar puncture showed a white blood cell count of 8 with protein and glucose levels within reference ranges. Test results were negative for Lyme disease and enterovirus in the cerebrospinal fluid (CSF). Oligoclonal bands were elevated with 10 in the CSF and 0 in the serum. The levels of immunoglobulin G in the CSF were elevated. Magnetic resonance imaging (MRI) of the brain with contrast was obtained prior to the lumbar puncture and demonstrated ill-defined T2-weighted hyperintensities in the left middle cerebellar peduncle and subcortical right frontal lobe.

Based on the girl’s presentation and diagnostic test results, what caused her symptoms?

The combination of unilateral hearing loss, hyperreflexia, dysmetria, vomiting, and ataxia suggested the possibility of a central brainstem and/or cerebellar lesion with a differential diagnosis including infection (meningitis/encephalitis), vascular (stroke), neuroinflammation (demyelination, vasculitis), complicated migraine, and neoplasm. Infectious etiologies were less likely due to a lack of altered mentation and absence of systemic symptoms. A neoplastic process was unlikely given the subacute onset of symptoms.

The findings of the MRI, in which ill-defined T2-weighted hyperintensities in the left middle cerebellar peduncle and subcortical right frontal lobe were observed, are typically noted in demyelinating diseases (Figures 1 and 2). These diseases may include entities such as acute disseminated encephalomyelitis (ADEM) or multiple sclerosis (MS).

The presence of oligoclonal bands along with an elevated immunoglobulin G index suggests central nervous system inflammation, supporting a diagnosis of an acquired demyelinating syndrome (ADS). The patient was given high-dose intravenous methylprednisolone daily for 3 days, and she showed dramatic improvement in symptoms on the first day after corticosteroid administration. All symptoms completely resolved within 1 week.

Demyelination is a descriptive term used to indicate injury to the protective covering of the nerves, the myelin, which is collectively known as the “white matter” of the nervous system. ADS is a term used to represent a first demyelinating attack of the central nervous system in childhood. Pediatric ADS occurs with a reported incidence of 0.5 to 1.66 per 100,000 children1-4 and typically manifests monofocally, as in the case of our patient, with all neurologic symptoms referable to the cerebellar lesion. ADS may also present as a polyfocal presentation, as is noted in cases of ADEM, an acute demyelinating syndrome associated with encephalopathy that is typically postinfectious or postvaccinal in nature.

Symptoms of acquired demyelination often present in a subacute fashion, with gradual manifestation over the course of days. High-dose corticosteroids for 3 to 5 days are considered first-line treatment of ADS, because they appear to accelerate the speed of recovery from a demyelinating attack.5-8 In many patients, ADS will prove to be monophasic in its course; however, a proportion of patients with ADS will “relapse” with a second demyelinating attack. For this reason, all patients with ADS should be followed longitudinally by a pediatric neurologist. A percentage of patients with ADS ultimately will meet diagnostic criteria for MS (a chronic neuroinflammatory disorder), typically within 5 years of the initial ADS presentation. The reported proportion of children with ADS who are ultimately diagnosed with MS ranges from 15% to 45%.2,3,9-12 Although MS is traditionally considered a disorder of adults, it is becoming increasingly identified in childhood, with up to 10.5% of patients having clinical onset of MS before the age of 18 years.13 Once the MS diagnosis has been made, lifelong immunomodulatory therapy should be initiated under the watchful eye of a pediatric neurologist.

J. Nicholas Brenton, MD, is a pediatric neurologist specializing in pediatric demyelinating disease from the University of Virginia in Charlottesville, Virginia.