What Is Causing This Boy’s Swollen, Bleeding, and Pustular Rash?

A previously healthy 9-year-old boy presented to the emergency department with a rash of 1 month’s duration. The rash had continued to spread and was significant for swelling, bleeding, and pustular discharge from the groin area. The rash had started on his chest and then spread to the back, abdomen, and groin. Over the week prior to his presentation, the rash had progressed down his legs.

Physical examination was notable for a maculopapular rash in various stages of healing/crusting on the face, including eyelids and lips; scalp; neck; trunk; back; groin/genital area; buttocks; arms, hands, and palms; and legs and tops of the feet (Figures 1 and 2). The soles of the feet had been spared. The genitourinary examination revealed that several of the lesions had eroded and become necrotic. The area at the base of the glans penis had pustular discharge. The patient was treated with oral oxycodone for pain management and started on azithromycin for its anti-inflammatory effects. In addition, the boy was being treated with triamcinolone cream for the rash on the body, and hydrocortisone 1% cream was applied to the rash on the face and axillae.

What is the etiology of this rash?

A dermatologist was consulted, and a punch biopsy was performed. The biopsy showed pityriasis lichenoides et varioliformis acuta (PLEVA). Histologic findings suggesting PLEVA include interface changes with scattered necrotic keratinocytes in the basal and spinous layers of the epidermis.1 Perivascular and diffuse lymphocytic and histiocytic infiltration that largely obscures the dermoepidermal junction is also present.1 With immunophenotyping, CD8+ cytotoxic/suppressor T cell predominance is seen along with CD3+ T cells, immunoglobulin M, and C3 vascular deposits.2

PLEVA was first described in 1894 and was initially termed as parapsoriasis owing to its similarity in appearance to guttate psoriasis.3 The disease has no racial or geographic predispositions and is slightly more predominant in males. PLEVA most frequently occurs in the second or third decade of life; however, it can occur in all age groups.3,4 Overall, children tend to have a worse prognosis than adults in that children are less likely to experience remission, more likely to experience post-inflammatory hyperpigmentation or hypopigmentation, and less likely to be responsive to treatment.5 Of note, generalized PLEVA resolves 2 to 3 times more rapidly than localized PLEVA.6 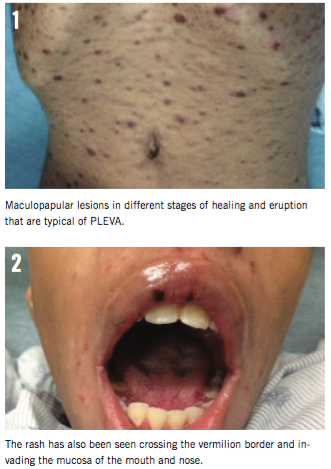 There are multiple theories to describe the etiology of PLEVA. One theory is that it may be secondary to an inflammatory reaction triggered by infectious agents, including Epstein-Barr virus, HIV, adenovirus, Toxoplasma gondii, parvovirus, varicella zoster virus, human herpesvirus 8, group A streptococcus, and Staphylococcus aureus. It is thought to be an immunologic response to a microbial antigen rather than a lymphoproliferative disease such as a T-cell dyscrasia. Another theory involves PLEVA being the result of an immune complex–mediated hypersensitivity reaction, since it has sometimes occurred after patients have received the measles-mumps-rubella vaccine, tetanus-diphtheria-acellular pertussis vaccine, or radiocontrast iodide.3

Treatment is made difficult secondary to frequent spontaneous remission, which makes it hard to evaluate the efficacy of pharmacologic intervention.4 First-line treatment is oral erythromycin, which is given for its anti-inflammatory properties rather than its antibiotic effect. When first-line treatment fails, a dermatology consult is recommended. Second-line treatment includes topical nonsteroidal immunomodulators such as topical tacrolimus. Phototherapy has also been found to prevent relapses (UVB > UVA). Refractory disease treatments include methotrexate, dapsone, and cyclosporine.1,4

Amanda W. Carter, MD, is a third-year postgraduate pediatric resident in the Department of Pediatrics at Children’s Hospital of Richmond at Virginia Commonwealth University.

Clifton C. Lee, MD, is chief of pediatric hospital medicine and an associate professor in the Department of Pediatrics at Children’s Hospital of Richmond at Virginia Commonwealth University.

Kirk Barber, MD, FRCPC—Series Editor, is a consultant dermatologist at Alberta Children’s Hospital and clinical associate professor of medicine and community health sciences at the University of Calgary in Alberta, Canada.