What caused these painful blisters?

For several weeks, a 68-year-old man has had painful blisters on his hands that crusted as they healed. The patient has diabetes mellitus, hypertension, and chronic renal failure, for which he is undergoing hemodialysis. His long-term medications include a hypoglycemic agent and a diuretic. 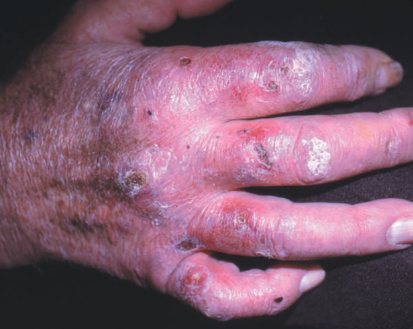 Oral cephalexin failed to resolve the bullae and vesicles. What is the most likely cause of these lesions?

The patient has pseudoporphyria, E. The histologic features of this condition are identical to those of porphyria cutanea tarda (PCT), but porphyrin levels are normal. In addition, PCT is often associated with hypertrichosis and cutaneous sclerosis, which are not seen with pseudoporphyria.

Hemodialysis is a common cause of pseudoporphyria. This condition is also associated with the ingestion of certain drugs, such as furosemide (which this patient was taking) and naproxen.

Management of pseudoporphyria includes discontinuation of offending agents (in this case, furosemide) and protection of exposed skin from sunlight and trauma. For patients with dialysis-induced pseudoporphyria, protection is the only option.

This patient had a number of comorbid conditions. He elected to discontinue dialysis and died shortly after the photograph was taken. ■