What is the cause of this infant's projectile vomiting? 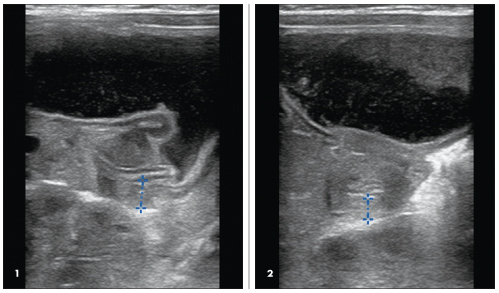 A 23-day-old boy born at 39 weeks’ gestation via normal spontaneous vaginal delivery was brought to the emergency department with vomiting of 1 week’s duration. Initially, the vomiting occurred twice a day. Two days before presentation, the infant began having projectile, nonbilious vomiting after every formula feeding and during sleep. The parents reported that the infant had constipation and decreased urination for the past 4 days but no change in appetite.

Birth and perinatal history were unremarkable, as was the review of systems; birth weight was 3.9 kg. The infant’s 2-year-old brother had infantile pyloric stenosis, which was repaired without complications in the first month of life. The patient was taking no medications and had not yet received any vaccinations.

Results of complete blood cell count and chemistry panel were within normal limits. Abdominal ultrasonography was performed at bedside with the patient lying on his right side. Transverse (Figure 1) and longitudinal (Figure 2) images of the epigastric region are shown.

The bedside ultrasound examination of the abdomen revealed a thickened, elongated pyloric muscle, consistent with hypertrophic pyloric stenosis. The pyloric channel length was 19 mm (Figure 1),
and the pyloric muscle transverse diameter was 4.9 mm or 5.6 mm, depending on the point of measurement (Figure 2).

Ultrasonography performed in the radiology department revealed similar measurements, which confirmed the diagnosis. The patient underwent pyloromyotomy, without complications, and was discharged the following day. 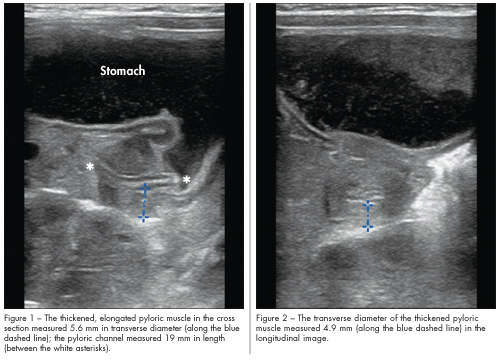 Pyloric stenosis, or infantile hypertrophic pyloric stenosis (IHPS), is the most common cause of infant intestinal obstruction.1 The incidence per 1000 live births is 2.4 in whites, 1.8 in Hispanics, 0.7 in African Americans, and 0.6 in Asians. There is an increased incidence in patients with a family history of pyloric stenosis and in firstborn white males.2

IHPS results from interaction of genetic and environmental factors.3 Several genetic loci associated with IHPS have been identified. Infants exposed prenatally to hydantoins or trimethadione and postnatally to erythromycin are at increased risk for IHPS.

Functional gastric outlet obstruction is caused by both hypertrophy and hyperplasia of the muscular layers of the pylorus. Although the exact etiology of IHPS is unknown, some postulate that duodenal hyperacidity—resulting from high parietal cell mass and loss of gastric control—causes repeated pyloric contraction, which leads to pyloric stenosis.4

Infants aged 3 to 12 weeks are typically affected. Most infants with IHPS are brought for medical attention between 4 and 8 weeks of age. They have a good appetite despite projectile emesis. As the obstruction continues, the infant can become malnourished and dehydrated, which may lead to weight loss and the development of hypokalemic or hypochloremic metabolic alkalosis. The pathognomonic physical examination finding of an upper right abdominal mass, often described as an olive, may be palpable.5

The diagnosis of IHPS should be suspected based on a history of recurrent projectile vomiting and palpation of a mass in the right upper abdomen. It seems that IHPS is diagnosed earlier now than in the past, because patients often present without the classic electrolyte disturbances. This may be a direct result of the ease of obtaining, and a low threshold for performing, ultrasound examination.

When ultrasound imaging is unobtainable or when the measurements are in question, an upper GI series with barium may be useful for diagnosis. This test may reveal retention of contrast in the stomach and a long, narrow pyloric channel with a double track of barium (double track sign).7 The hypertrophied muscle produces a semilunar filling defect in the antrum of the stomach.

Treatment of IHPS includes correction of any fluid and electrolyte abnormalities before surgical intervention. Traditionally, a Ramstedt pyloromyotomy is performed through either an incision in the right upper quadrant or above the umbilicus. A longitudinal incision is made on the anterior surface of the pylorus down to the submucosa dividing the muscle.

Recently, many centers have moved to a laparoscopic approach for pyloromyotomy, which has been shown to have a faster recovery time and better cosmetic result. The procedure performed depends on infant size, surgeon preference, and status of umbilicus before intervention. Both procedures are equally successful and appropriate.