What Is the Cause of This Girl’s Spreading Polymorphic Rash?

A 10-year-old girl presented to the clinic 3 days after she developed a painful lump on the back of her head. She reported that she felt tired, but she was afebrile and had no other symptoms.

At the clinic, a tender, slightly raised, crusty lesion that measured 1.0 × 0.5 cm was found over the occiput. The girl received a prescription for cephalexin 500 mg twice daily, but on day 4 her mother discontinued the antibiotic because 3 erythematous areas had appeared, accompanied by a temperature of 38.9°C. She returned to the clinic on day 8, when physical examination findings revealed 3 oval, uniformly pink, nonpruritic lesions that were 1.0 × 1.5 cm above the left breast, on the back of the chest (Figure 1), and on the left hip (Figure 2). The scalp lesion had almost completely cleared. On day 10, amoxicillin was started. The patient reported that on day 11, new areas of rash, which were different from the original rash, appeared on her legs. On day 17, a follow-up visit revealed multiple oval rashes on her face, right and left thighs (Figure 3), and chest (Figure 4).

What is causing this girl’s rash? 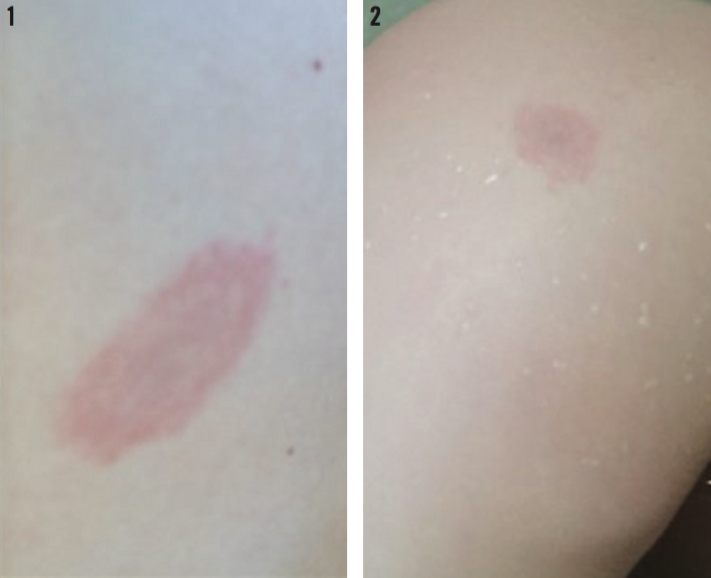 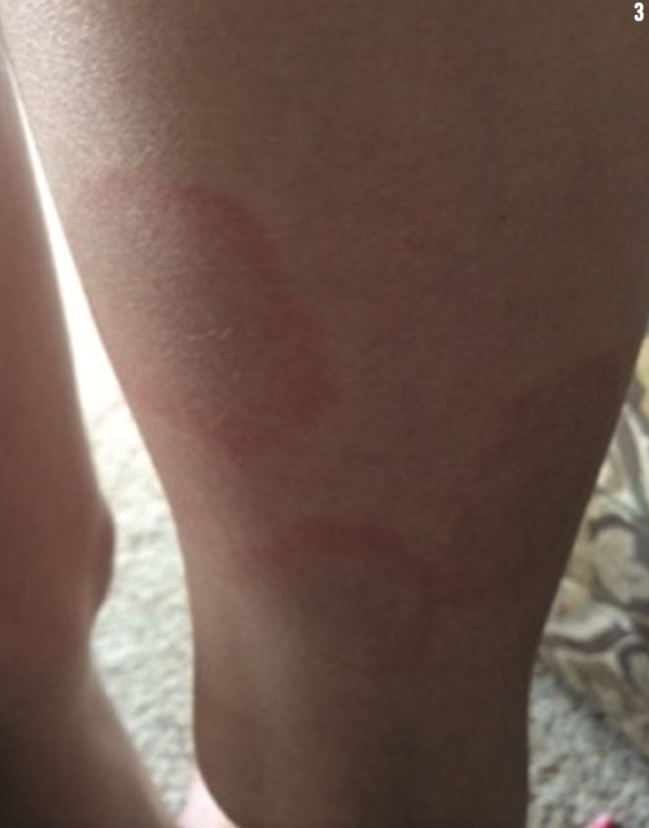 Immunoglobulin M-based Lyme disease serologic testing was ordered on day 8, and results obtained on day 10 met the Centers for Disease Control and Prevention (CDC) criteria for early infection with Borrelia burgdorferi. Amoxicillin was started on day 10, but the rash spread even further after treatment began. It disappeared over the next 3 weeks.

The atypical scalp lesion led to a delayed diagnosis of Lyme disease, further compounded by a skin rash thought to be an allergic reaction to cephalexin. It is important to appreciate the various skin rashes found in the early localized and early disseminated stages of Lyme disease, because early identification and treatment can prevent systemic complications.

Lyme disease, the most common tick-borne disease in the United States, is caused by the spirochete Borrelia burgdorferi sensu stricto. It is transmitted by the infected blacklegged deer tick: Ixodes scapularis in the east and upper midwest (especially Minnesota, Wisconsin, and northern Illinois), and

Ixodes pacificus in the west. The disease is initially recognized by clinical symptoms and signs occurring in patients from an endemic area. The incubation period is 1 to 32 days (median 11 days) from tick bite to the appearance of a single or multiple cutaneous lesions, compatible with a diagnosis of erythema migrans (EM).1

Early localized Lyme disease manifests as EM, the hallmark of Lyme borreliosis, occurring as a single lesion at the site of the tick bite in about 75% of patients with the disease. An initial red macule or papule expands as a well-defined red patch with varying intensities of erythema within the patch over days to weeks, forming a circular lesion >5 cm in diameter. If untreated, it may grow to a diameter of 30 cm or more. The classic target or “bull’s eye” lesion, which appears as a red center surrounded by a clear ring, and another red peripheral ring, is not commonly found. While most lesions have an annular shape, triangular and elongated patches have been described.2 The skin surface is usually smooth, flat, nonpruritic and nontender. Single EM lesions may manifest as:

Early disseminated infection may develop in untreated patients as a result of spirochetemia. In about 25% of patients, secondary (EM) occurs where 2 or more skin lesions appear several days to several weeks (1-4 weeks) after tick attachment; the secondary lesions appear at sites different from the site of the initial tick bite. The lesions are similar to but usually smaller than the primary lesion, and they lack the punctum of the tick bite found in the initial EM lesion. Cranial nerve palsies (especially the facial nerve), lymphocytic meningitis, and carditis may occur in this stage.

Late disease may manifest as pauciarticular disease of the large joints. Encephalitis and polyneuropathy occur rarely in this stage.

The diagnosis is made on the distinctive appearances of EM in a patient with tick exposure, and the clinician must recognize its protean manifestations. Only one-third of patients with single lesions are seropositive, and serologic testing is not recommended prior to treatment except in atypical presentations. In disseminated disease, the serologic tests are more likely to be positive.

Single EM lesions may be mimicked by tinea corporis, granuloma annulare, and the herald patch of pityriasis rosea. Multiple lesions with disseminated infection may suggest other disease processes. Erythema multiforme is a symmetric, raised, pruritic, polymorphic rash with macules and papules, as well as typical and atypical target lesions caused by herpes simplex, Mycoplasma pneumonia, and other triggers. Urticaria multiforme appears as pruritic, polycylic, erythematous wheals. It should be noted that EM lesions are also found in Southern tick-associated rash illness (STARI), which is associated with the Lone Star tick, Amblyomma americanum.7 The causative agent may be a still unidentified Borrelia species.

Antibiotic therapy leads to complete resolution of both single and multiple skin lesions. Early localized disease and early disseminated EM are treated with doxycycline for 14 days. Amoxicillin is prescribed for children younger than age 8 years and for those unable to tolerate doxycycline. Cefuroxime is an alternate medication. Practice guidelines should be consulted in managing all stages of the disease.8,9

Geethi M. Abraham, BS, is a fourth-year medical student at University of Illinois College of Medicine at Rockford.