What is the Best Treatment for Osteoporosis?

Bisphosphonates have become mainstays in the treatment and prevention of osteoporosis, most commonly in post-menopausal women. They are available in a variety of dosage forms and dosing strategies and proven to safely and effectively prevent osteoporosis-related fractures. In fact, national guidelines recognize the use of bisphosphonates as the first-line treatment.

Although all the bisphosphonates share similar FDA approvals and overall labeling, specific differences make agents more attractive than others in various situations.

A 65-year-old white female with a history of hyperthyroidism and hypertension presented for her annual physical exam and to review recent laboratory test results. As she is postmenopausal, a bone density scan, dual-energy x-ray absorptiometry (DEXA), was ordered as part of her laboratory workup. 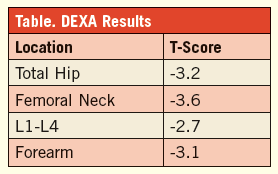 She takes levothyroxine 100 mcg daily, indapamide 2.5 mg daily, and calcium/vitamin D 500 mg/400 U twice daily. All of her lab values are within normal limits, including her thyroid panel and blood pressure. However, her DEXA scan results (Table) indicate that she is osteoporotic.

Based on these DEXA results, national guidelines universally recommend that our patient be considered for antiresorptive therapy with bisphosphonates as the initial treatment of choice. While an improvement (or slowing of progression) in bone mineral density (BMD) has been documented by all the bisphosphonates, improvement in BMD is not the primary goal of treatment; a reduction in osteoporosis-related fractures is the main outcome of interest. Which agent, or agents, would be most appropriate for the patient? Or, are all the bisphosphonates considered equivalent in terms of their fracture risk reduction?

Efficacy. Hip fracture is the most devastating complication of osteoporosis, especially in elderly patients. Studies demonstrate a 1-year mortality risk of approximately 17% for women and up to 30% for men, although these rates are considered to be improving in recent times. Furthermore, hip fractures can rob patients of their independence and limit their ability to perform daily activities, many of which will not be fully regained following the index hip fracture. Given the high morbidity and mortality associated with hip fractures, this is likely the main target of antiresorptive therapy.

Spinal fractures are also associated with an increased 1-year mortality rate and are important to reduce in addition to nonvertebral/nonhip fractures. However, not all bisphosphonates reduce the risk of all fractures equally, a very important consideration when selecting therapy.

Due to the lack of benefit in hip fracture risk reduction, ibandronate is considered a second-line agent by the American Association of Clinical Endocrinologists osteoporosis guidelines and should be reserved for those who cannot tolerate alternative bisphosphonates.

Onset. The timing of fracture risk reduction should be taken into consideration. In patients who are high-risk for fracture (ie, previous fracture, T score of <-3.5) it may be advantageous to have an agent that has shown to have a faster onset of efficacy in terms of fracture risk reduction. The premarketing clinical trials for alendronate and ibandronate demonstrated a reduction in fracture risk at 3 years versus placebo, whereas risedronate and zoledronic acid demonstrated a benefit in just 1 year versus placebo.

Offset. The optimal duration of bisphosphonate therapy has not been clearly demonstrated. Prolonged therapy may increase the risk for atypical fractures as bisphosphonates impair normal bone remodeling. Accordingly, 3 to 5 years of continued treatment is generally recommended as an initial treatment course after which a drug holiday (of an undetermined time period) should be considered in the hopes of allowing normal bone remodeling to resume to repair potentially weak areas of bone. However, there is a potential concern that the drug holiday would attenuate the fracture-protective effects of the bisphosphonates.

Adherence. Patient issues with compliance/adherence or patient preference may also influence the initial choice in bisphosphonate. Alendronate, ibandronate, and risedronate are available in oral dosage forms; most are administered on a daily or weekly basis, while ibandronate and risedronate can also be given once per month.

Zoledronic acid is only available as an IV that is administered once per year. Ibandronate is administered intraveneously once every 3 months. The most nonadherent patients may prefer once-yearly intraveneous zoledronic acid whereas others may prefer once daily or once weekly dosing. All potential regimens should be discussed with patients to identify the optimal regimen for their needs. Aledronate, ibandronate, and risedronate are all available generically as oral tablets.

Safety. In terms of safety, there does not appear to be any significant differences between the agents that would significantly alter drug selection. The oral formulations appear to be well-tolerated. They all require the patient to remain upright for at least 30 minutes following administration with the exception of ibandronate, which requires 60 minutes. Infusion reactions may occur with the IV formulations, although these reactions seem to improve over time and may be attenuated with pretreatment medications, such as acetaminophen and diphenhydramine, and lengthening the infusion duration.

Based on the above discussion, ibandronate would not be considered a relevant treatment option due to its lack of benefit in reducing the risk for hip and nonvertebral/nonhip fractures. As our patient is considered high-risk based on the T-score (>-3.5), the need for an agent with a rapid onset is likely desirable. If a drug holiday will be planned after an initial 3 to 5 years of treatment, alendronate could be preferred over residronate and zolendronic acid as it maintains postdiscontinuation efficacy the longest.

In this case, our patient was counseled to continue her calcium and vitamin D supplementation.

Eric A. Dietrich, PharmD, BCPS, graduated from UF College of Pharmacy in 2011 and completed a 2-year fellowship in family medicine where he was in charge of a coumadin clinic. He now works for the UF Colleges of Pharmacy and Medicine.