What Are These Streaks and Swirls on an Infant Girl’s Limbs?

A 5-month-old girl was born to 28-year-old gravida 4 para 1 mother at 38 weeks’ gestation, following an uncomplicated pregnancy and a normal vaginal delivery. Her father was a 30-year-old healthy man, and the parents were nonconsanguineous. The girl’s birth weight was 3.1 kg, and her length was 50 cm. As reported by her mother, erythematous papules and vesicles were noted on the child’s upper and lower limbs in the immediate neonatal period. The rash transformed into verrucous streaks in a linear and swirling pattern at 2 months of age. Subsequently, at 4 months of age, hyperpigmented streaks and swirls were noted. There was no family history of similar skin lesions. Ten days prior to presentation, the infant had a seizure unassociated with fever.

On physical examination, vital signs were normal. There were streaks and swirls of brown pigmentation along the lines of Blaschko on the upper limbs (Figure 1) and lower limbs (Figure 2). Patchy alopecia on the vertex was also noted. The rest of the examination was unremarkable. 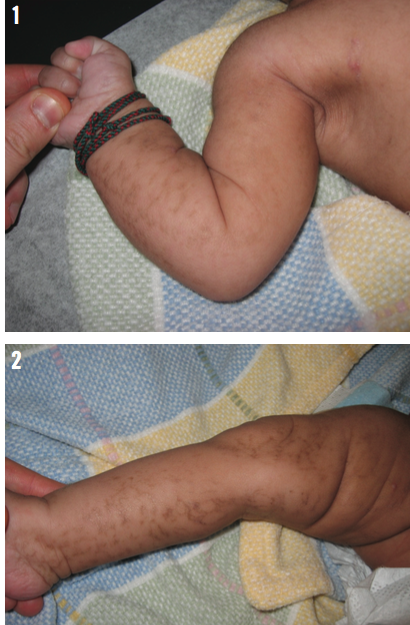 (Answer and discussion are on the next page.)

Incontinentia pigmenti, also known as Bloch-Sulzberger syndrome, is an X-linked dominant neurocutaneous genodermatosis characterized by linear cutaneous lesions along the lines of Blaschko and often accompanied by neurologic, ocular, dental, and skeletal abnormalities.1 The condition was first described in 1908 by Garrod.2 Subsequently, Bloch3 and Sulzberger4 delineated the condition in 1926 and 1928, respectively, and the condition now also bears their names. The term “incontinentia pigmenti” was coined by Bloch based on the observation of accumulation of melanin in the deep dermis as a free pigment or melanophages with resultant incontinence of epidermal pigment.3

Incontinentia pigmenti is inherited as an X-linked dominant trait. The condition is caused by mutations in the IKBKG/NEMO gene (inhibitor of kB light polypeptide gene enhancer in B cells, kinase gamma/nuclear factor kB essential modulator) that has been mapped to Xq28.5,14 The gene is crucial for the regulation of tumor necrosis factor-induced apoptosis; mutation of the gene results in cells susceptible to apoptosis from intrinsic factors.14 Lyonization of the X chromosome accounts for the reticular or whorled cutaneous pattern pathognomonic for incontinentia pigmenti.

Histopathology of the lesion shows epidermal spongiosis, intraepidermal vesicles filled with eosinophils, and dyskeratotic keratinocytes during the vesicular stage; hyperkeratosis, acanthosis, and papillomatosis in the verrucous stage; melanin deposits in the dermis as free pigment or in aggregates of melanophages and incontinence of epidermal pigment during the hyperpigmented stage; and discreet epidermal atrophy and lack of eccrine glands in the hypopigmented or atrophic stage.12,13,15,16

In general, clinical manifestations are more exuberant in sporadic than in familial cases.14 The cutaneous manifestations of incontinentia pigmenti usually progress through 4 successive but often overlapping stages; the lesions are distributed along the lines of Blaschko.1,9 Sites of predilection include the lower limbs, followed by the upper limbs, and trunk.14 The face is usually spared.8

The first stage (the vesicular stage) presents with papules and vesicles on an erythematous base appearing in crops beginning at birth or within the first few weeks of life, with each crop lasting 1 to 2 weeks.12 The vesicles can become pustular and bullous.13

The second stage (the verrucous/hyperkeratotic stage) presents with verrucous streaks consisting of hyperkeratotic warty papules or plaques in linear or swirling pattern.12 This phase usually appears within 2 to 6 weeks and disappears by 6 months of age.13,16

The fourth stage (the hypopigmented/atrophic stage) presents with hypopigmentation, hairless anhidrotic patches, atrophy, and scarring. This stage typically takes many years to develop.1,9 Only 28% of patients have lesions in the fourth stage, and these are lesions that might persist into adulthood.16 It is important to note that some of the stages might develop in utero.1 Also, not all patients experience all 4 stages, and overlapping of stages is common.1,17 Thus, absence of certain stages does not exclude the diagnosis of incontinentia pigmenti.9

The main differential diagnosis includes linear and whorled nevoid hypermelanosis, hypomelanosis of Ito, and linear epidermal nevus. Linear and whorled nevoid hypermelanosis is characterized by linear streaks and swirls of macular hyperpigmentation in a reticulate pattern along the lines of Blaschko without any preceding inflammatory or verruciform lesions.18 Sites of predilection include the trunk and extremities. The hyperpigmentation usually appears within a few weeks of birth. The lesion tends to progress for 1 to 2 years before stabilizing and usually persists indefinitely.

In hypomelanosis of Ito, the skin lesion consists of seemingly bizarre, macular, hypopigmented streaks, stripes, whorls, and patches that conform to the lines of Blaschko.19 The lesions always involve more than 2 body segments.

Linear epidermal nevus typically presents as an asymptomatic, linear plaque consisting of well-circumscribed, discrete or confluent, pebbly, skin-colored, yellow or brown, closely-set or coalescing, noninflammatory papules.20 The lesion usually occurs on the trunk, neck, and extremity and follows Blaschko lines. The condition is often present at birth but might arise during the first year of life. The nevus may have a white and macerated appearance at birth. The lesion tends to become thicker, verrucous, and hyperpigmented over time, particularly around the time of puberty.20 The lesion grows slowly during childhood, but by adolescence it usually stops growing and does not extend any further.

In general, the prognosis is good with poor outcomes related to any underlying neurologic, ophthalmologic, dental, or skeletal complications.23

There is no effective treatment for this condition. Therapy is mainly symptomatic and supportive. Management requires a multidisciplinary approach and may require care from a pediatrician, dermatologist, dentist, geneticist, ophthalmologist, orthopedic surgeon, neurologist, and neurosurgeon depending on the specific manifestations that need to be addressed.