What Are These Erythematous, Scaly Lesions on My Foot?

An 83-year-old white man initially presented to the office because of a rash that had begun on the dorsal side of his right foot and had spread outward and upward from that area over a period of 2 months (Figures). He claimed that the rash had worsened over time, and it had become red, pruritic, tender, swollen, and crusty with scales and oozing. Prior to coming to our dermatology clinic, the patient tried to find relief through over-the-counter medications, which neither improved nor worsened his condition. The patient did not have any known  history of allergies, skin diseases, or notable rashes. He had a history of prostate cancer, for which he received brachytherapy. He also had several back surgeries over the years. The patient admitted to not having seen a physician in 2 years, to having a 65 pack-year history of smoking, and to drinking six glasses of scotch per day. Upon presenting to the office, the patient’s rash was located on both feet, legs, and thighs. At this visit, biopsies were taken from three sites: right thigh, right lower leg, and right second toenail. The patient was prescribed mupirocin ointment, ciprofloxacin tablets, and triamcinolone ointment.

After 1 month, the patient returned to the office for a follow up. He claimed that there was slight improvement of the swelling in all areas originally affected by the rash, although he reported some persisting pruritis and painful cracking of the skin on his feet. On physical examination, he appeared to be in no physical distress. There was still some evidence of erythematous, scaling skin on the left foot, right and left thighs, and legs; however, there did not appear to be any signs of edema. 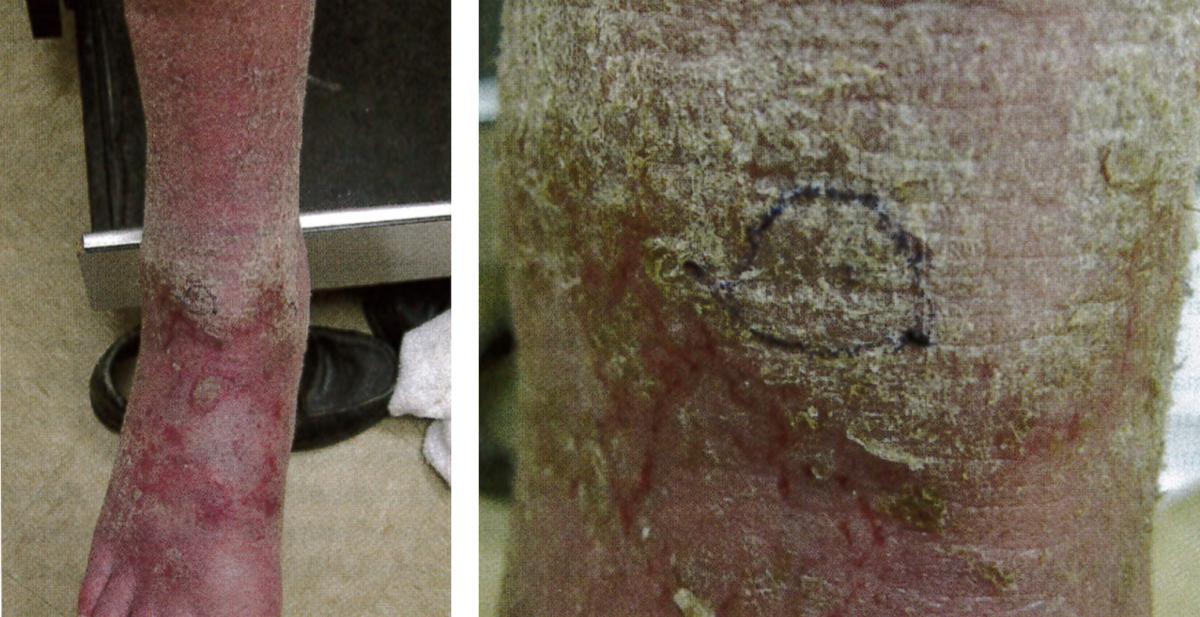 Figures. Photographs showing erythematous lesions on the patient’s right foot and ankle. The ankle was marked with ink to show where biopsy was taken.

Based on the photographs and the case description, what is your diagnosis?

Stasis dermatitis is a cutaneous manifestation of the valve incompetency in the form of eczema. There are three types of eczematous inflammation seen in stasis dermatitis: subacute, acute, and chronic inflammation.3,4 The subacute eczema appears as dry and scaly skin, often seen in the winter season.3,4 Over a period of time, brown staining of the skin appears as an outcome of the increased amount of hemosiderin involved.4 The hemosiderin results from fragile capillaries that enable leakage of blood into the surrounding tissue.1 It has also been suggested that the brown pigmentation may be due to melanin from the epidermis.1 Acute eczema appears much more dramatically as an erythematous plaque on the lower leg, often with crust and weeping. Occasionally, autoeczematization appears at the same time on the palms, trunk, and/or extremities.4 Over time, the subacute and acute inflammatory reactions become chronic, appearing as a cyanotic red plaque. As with many chronic inflammatory reactions, there is irreversible fibrosis of the skin.4

Pathological Findings
Biopsies of skin with stasis dermatitis reveal perivascular lymphocytic infiltrates and extravasated red blood cells, as was seen in the biopsy from the case study. The results from the biopsy sections taken from the patient’s right thigh and right lower leg during his first examination showed perivascular lymphocytic infiltrates with extravasated red blood cells. The epidermis showed diffuse spongiosis. A Periodic Acid-Schiff stain of the toenail biopsy was positive for bacteria, but negative for a fungus. Biopsies were taken from two separate areas to confirm that the separate sites could be included in the same diagnosis. The third biopsy was taken from his toenail to see if it could be included in the diagnosis or if it was a fungus or bacteria. These biopsies, along with clinical findings, such as patient inactivity and cutaneous skin pigmentation indicating venous insufficiency, were used in making the diagnosis.

Approaches to Treatment
When treating stasis dermatitis, two key considerations include correcting venous hypertension in the lower extremities and treating any secondary infections that may be present.3 Topical steroids (groups II-V) are given to help reduce the eczematous inflammation. In addition, wet dressings of saline or water may be applied to help reduce the inflammation.4

Our case patient continued taking his original prescription of ciprofloxacin and was referred to a vascular specialist.

Ruling Out the Other Diagnoses

What follows is a brief review of some of the other possible diagnoses, which were ruled out for our patient.

Asteatotic Eczema
Asteatotic eczema, also known as eczema craquele, is an inflammatory skin disease that is commonly seen in elderly persons.4 It is often brought on when there is excessive dryness of the skin. Similar to the subacute eczema seen in stasis dermatitis, this form of eczema develops during the winter when the weather is more likely to dry out the skin.4 Typically, asteatotic eczema is seen on the anterolateral areas of the lower legs, but can appear anywhere on the body.4 The affected areas become xerotic and worsen as the skin continues to dry out and if the patient continues scratching the area. Fissures also form within erythematous plaques in the affected area, which may seep and become purulent.4 Patients may be more likely to develop the xerosis seen in asteatotic eczema, depending on their medications, the weather, comorbidities, and their overall state of health.5

As people age, their skin loses some of its capacity to remain hydrated, further increasing the likelihood of developing xerosis.5 Some epidemiological studies have shown that patients with a history of atopic dermatitis and asthma are more likely to have xerosis.5 Other factors that have been correlated with xerosis are increased age, female sex, and taking simultaneous medications that could cause the xerosis.5 Treatment of asteatotic eczema is similar to the treatment of stasis dermatitis. The skin is treated with topical steroids (group III or IV). Although, with asteatotic eczema, wet compresses are only used for a limited time because they can dry out the skin. Oral steroids can cause relapse of the disease within several days of discontinuation; thus, use of these agents should be avoided.4

Lichen Simplex Chronicus
Lichen simplex chronicus, manifesting as an erythematous plaque, is a condition that results from constant scratching of a specific area of the skin.4 The lower leg, wrists, ankles, extensor forearms near the elbow, scrotum, and vulva are areas that are often scratched, and, subsequently, where these lesions are often seen.4 Patients have noted that scratching these areas often brings gratification, which further encourages this behavior.4 Powerful steroids, such as topical steroids in groups II through V, and cryotherapy, are treatment options for this condition.4

Dr. Norman is in private practice in Tampa, FL. He is also associate professor, University of Central Florida School of Medicine, Orlando, and at Nova Southeastern School of Medicine, Davie, FL. Ms. Aun is a third-year student of osteopathic medicine at Lake Erie College of Osteopathic Medicine, Bradenton, FL.