What Are the Pink Papules on This Boy’s Knuckles? What Do They Signify?

A 6-year-old boy’s parents brought him to a pediatric rheumatology clinic for evaluation of these fleshy papules overlying the joints of both hands. The boy was otherwise completely asymptomatic. He denied any fatigue or muscle weakness.

Review of symptoms was negative for fever, joint pain or swelling, and difficulty swallowing or other gastrointestinal complaints. The patient denied chest pain, shortness of breath, oral ulcers, symptoms of Raynaud phenomenon, skin tightness, calcinosis, weight loss, decreased appetite, or morning stiffness. There was no history of a limp or back pain—in fact, the boy is active in soccer and other sports, and his teachers and coaches had not reported any fatigue or weakness. Upon further questioning, the parents revealed that they had noted a reddish rash over the boy’s cheeks about a month ago.

He has a family history of systemic lupus erythematosus in a maternal aunt and a maternal uncle. His aunt mainly has arthralgia, but his uncle had received a renal transplant from the patient’s maternal grandmother, which lasted about 20 years; he now is on kidney dialysis. Another maternal aunt and uncle have autoimmune thyroid disease. There is no known family history of rheumatoid arthritis, inflammatory bowel disease, psoriasis, or multiple sclerosis. The patient has a 20-month-old brother with eczema and a 4-year-old sister who is healthy.

What’s causing these lesions?
(Answer and discussion on next page)

Answer: The fleshy papules on this 6-year-old boy’s hands are Gottron papules, a pathognomic sign of dermatomyositis.

Dermatomyositis is a rare systemic autoimmune disorder and is the most common inflammatory myopathy of childhood. It is primarily a vasculopathy of muscular and dermal capillaries. The disorder most often affects the skin and muscles but also can affect the joints, the esophagus, the lungs, and the heart; children with dermatomyositis frequently develop calcinosis of the skin and other soft tissues.

Although the cause is unclear, a combination of genetic predisposition, immunologic factors, and environmental factors is suspected. Incidence peaks between 5 and 14 years of age and is highest among white girls. 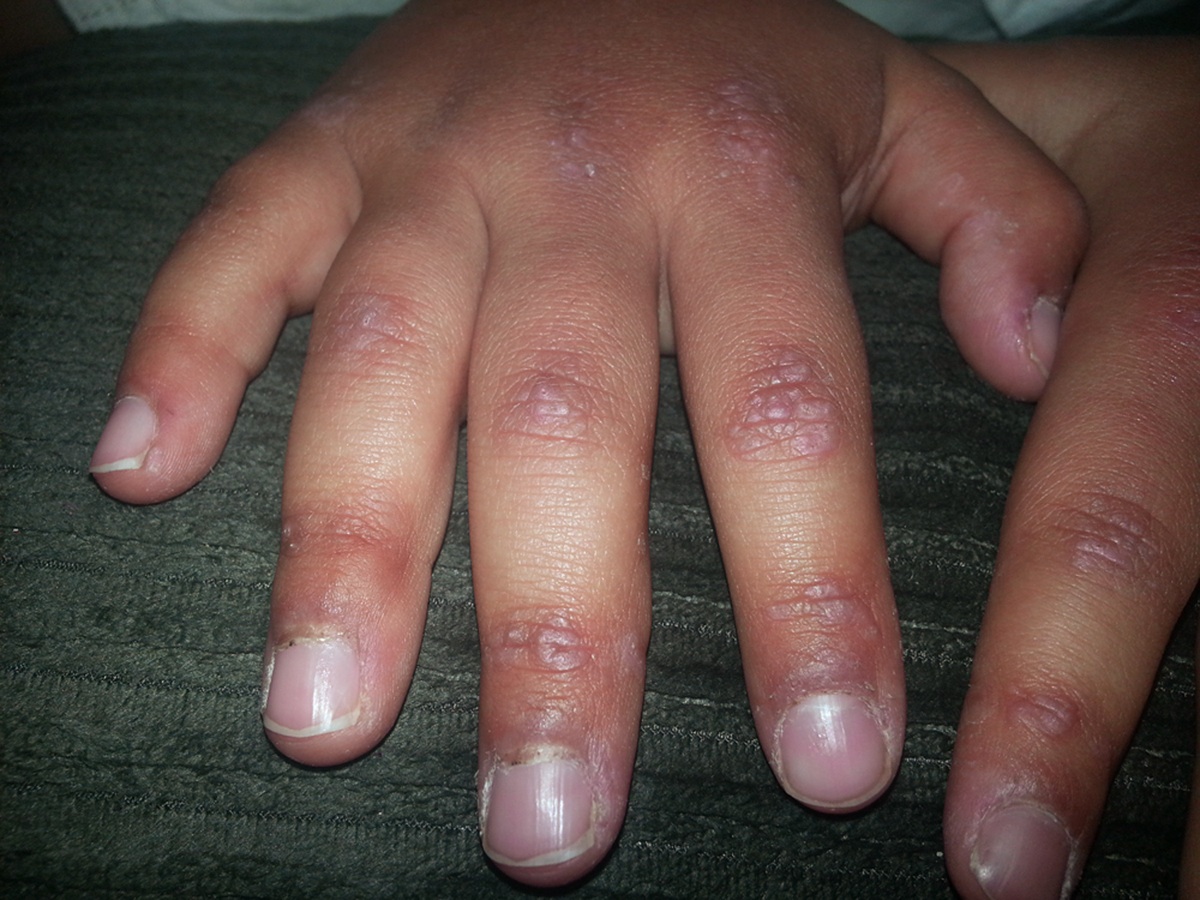 Our patient was begun on a regimen of plaquenil sulfate, methotrexate, prednisone, and leucovorin. Results of echocardiography and a swallowing study were pending at the time of publication. Magnetic resonance imaging showed “patchy, multifocal areas of muscle edema involving the muscles of the pelvis and lower extremities consistent with myositis.”

Given the strong correlation of Gottron papules with dermatomyositis, no other conditions were in the differential diagnosis. Nevertheless, because collagen vascular disorders often overlap, further tests for systemic lupus erythematosus were being performed on this patient. Given his strong family history of SLE and autoimmune disorders, a neoplastic process was not considered. Physical therapy and occupational therapy evaluations also were ordered.

The prognosis for this child generally is good, particularly because of his young age at the time of diagnosis and the absence of muscle weakness at the time of presentation. In approximately 80% to 85% of patients with dermatomyositis, the condition has a uniphasic course and goes into remission with treatment; another 10% to 15% have multiphasic disease that also eventually goes into remission. Less than 5% of cases go on to a have a severe, relapsing/remitting course.