What Is This Adolescent’s Asymptomatic Purple Plaque?

A 16-year-old white adolescent presented with a well-circumscribed lesion of 3 years’ duration on the right side of her buttocks.

The lesion had been slowly increasing in size, but without any associated symptoms. Her past health history was unremarkable, and she was not on any medication. There was no history of trauma to the site. 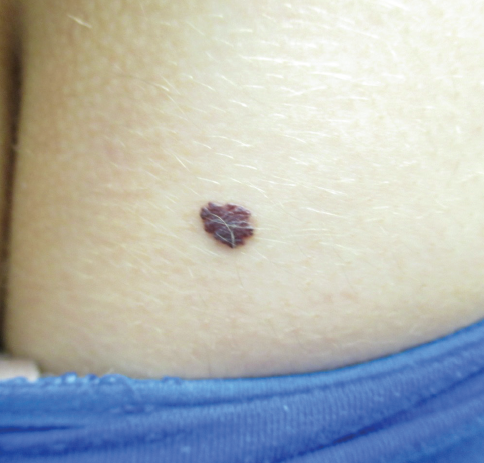 Angiokeratoma refers to a benign vascular telangiectasia in the papillary dermis that is associated with hyperkeratosis of the epidermis.1 The disorder is characterized clinically by solitary or multiple dark red or black papule(s), nodule(s), or plaque(s), mostly with a verrucous surface; histologically, it is characterized by dilated blood vessels in the papillary dermis with overlying epidermal hyperkeratosis and/or acanthosis.2

The condition was first described by Pierre-Antoine-Ernest Bazin in 1862.3 The term angiokeratoma was coined by Vittorio Mibelli in 1889.4 Numerous variants of angiokeratoma subsequently have been described.

The prevalence of angiokeratoma is estimated to be approximately 0.16% among the general population.2,5 The disorder is most prevalent in the white population and is less commonly observed in dark-skinned populations.2 The peak age of onset and the sex ratio vary among the variants of angiokeratomas.

Histologic findings include papillary dermal dilated thin-walled blood vessels, lined by a layer of endothelial cells, with hyperkeratosis and acanthosis of the overlying epidermis.1,8 There is no involvement of the deep dermis.

Solitary angiokeratoma is the most common variant and accounts for 70% to 83% of cases.2,5 The condition was first described by Imperial and Helwig in 1967.9 Clinically, a solitary angiokeratoma presents as a bluish black to black, warty, keratotic papule, and less commonly presents as a nodule or plaque.2 Sites of predilection include the lower extremities, the buttocks, and the lower abdomen.7 Rarely, solitary angiokeratoma may involve the oral cavity, mainly the tongue and tonsillar pillar.7 The condition most frequently is observed in the male population from the teenage years through the 40s.5

Angiokeratoma of Fordyce accounts for 14% of angiokeratomas.2 The condition occurs mainly in men over the age of 40.10 Clinically, angiokeratoma of Fordyce presents as multiple, well-circumscribed, dome-shaped papules, from 2 to 5 mm in diameter, mainly on the scrotum. Rarely, the lesions can be found on the penile shaft, glans penis, inguinal folds, abdomen, buttocks, and upper thighs in males and on the labia majora in females.10 The color of the lesions may be red, blue, purple, dark red, or bluish black.

Angiokeratoma of Mibelli is characterized by multiple dark red papules less than 5 mm in diameter, the surfaces of which become hyperkeratotic with time.1,2 The lesions occur mainly on the dorsa of the hands and feet.2 Girls in the first 2 decades of life most frequently are affected.

Angiokeratoma circumscriptum, the rarest of the angiokeratomas, typically presents at birth or shortly thereafter as a cluster of elevated, hyperkeratotic, dark red to purple or black aggregated papules.11 The lesions usually are situated unilaterally or otherwise asymmetrically on the legs and feet but also may occur on the thighs, buttocks, and occasionally elsewhere on the body.11 With time, the aggregated papules may coalesce to form hyperkeratotic verrucous plaques in a zosteriform distribution.6 The female to male ratio is 3 to 1.6 The condition may be associated with Klippel-Trénaunay syndrome, Cobb syndrome, nevus flammeus, cavernous hemangioma, and traumatic arteriovenous fistula.6

The diagnosis is mainly clinical. The use of dermoscopy facilitates visualization of dark or red lacunae, a whitish veil, peripheral erythema, and a hemorrhagic crust, which are features of angiokeratomas.5 A skin biopsy or referral to a dermatologist should be considered if the diagnosis is in doubt.

Rarely, intermittent bleeding following trauma can occur and can result in a hemorrhagic crust.1,5 Angiokeratomas are prone to thrombosis. The condition can be cosmetically unsightly and may lead to anxiety and social embarrassment.

Without treatment, angiokeratoma lesions tend to persist and may increase in size and number with time.1 Spontaneous regression is rare.

For those who desire to be treated for cosmetic reasons, and for those with symptomatic lesions, options include surgical excision, cryotherapy, electrocautery, sclerotherapy, and laser therapy.1,10