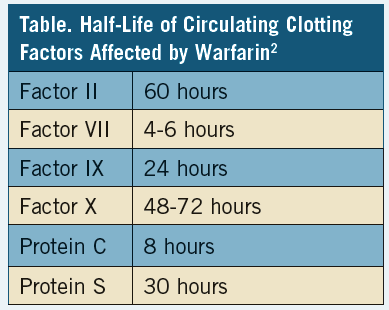 The advent of a variety of methodologically new antithrombotic agents has provided clinicians with important choices to make when selecting treatments for commonplace syndromes, such as atrial fibrillation, pulmonary embolism, and deep venous thrombosis. Although newer agents show great promise, they should in no way detract from the time-honored and the well-substantiated success of warfarin—which is still recommended by respected consensus groups, such as The American College of Chest Physicians (AT9),1 as the preferred initial treatment for atrial fibrillation.

This column aims to establish a strong foundation in the fundamentals of appropriate administration, monitoring, and management of warfarin. The goal is for primary care clinicians to feel at home to initiate, monitor, and adjust dosing through the gamut of commonplace scenarios one is likely to encounter.

Evidence-based guidelines are designed to help with clinical decision-making and come with a warning that they are not a substitute for using your best judgment. While not every clinical encounter is a double-blind, randomized, placebo-controlled answer, we will couple evidence-based standards of treatment with therapeutic wisdom that stems from the experience of (most usually) very successful management of patients requiring antithrombotic treatment in a primary care clinic that is co-managed by clinical pharmacologists in concert with primary care physicians.

Warfarin, also known as dicoumarol, was discovered when grazing cattle experienced bleeding after eating feed that was spoiled with sweet clover, which contains dicoumarol. Coumarin, the parent compound of warfarin, is a synthetic version of dicoumarol. The name warfarin is derived from its discovery at the University of Wisconsin as part of research funded by the Wisconsin Alumni Research Foundation (WARF, leading to warf-) combined with the chemical class coumarin (-arin) that warfarin belongs too.

How Does it Work?

Since it is impossible for anyone other than hematologists or overzealous medical and veterinary students to remember all the steps of the coagulation cascade, suffice it to say that numerous steps in the coagulation process are amenable to blockade resulting in hypocoagulability. For several decades, the standard test to measure blood coagulability was the prothrombin time (PT), commonly known as the ‘Pro-time.’ The PT measured the time to clotting of a blood sample compared to control—which in normal patients is 12 to 13 seconds.

As valuable as the PT was, it was not generalizable. That is, the PT at your local hospital would differ (sometimes significantly) from the hospital across the street, since every test was compared to a local onsite control that was not the same from lab-to-lab.

To the rescue came the international normalized ratio (INR), which inherently compensated for a control, such that all laboratory sites could use the same method and come up with comparable results. Normally coagulating blood has an INR of 0.9-1.1, and persons are considered meaningfully (potentially therapeutically) anticoagulated when the INR is >2.0.

Anticoagulation with warfarin is not immediate—it requires time. This is because depletion of endogenous clotting factors takes time. Factor II (Table) has the longest half-life of active steps in the coagulation cascade. Until factor II is appreciably reduced, warfarin cannot express its full anticoagulant effects. Since, on average, it takes about 5 days to deplete factor II to a relevant extent in healthy individuals, we do not typically anticipate seeing meaningful increments in coagulation status until at least 5 days of warfarin administration.

Agatha is an 85-year-old woman with controlled hypertension (lisinopril 20 mg/d). She has just moved to your community from another town. Her sister brought her in for a complaint of irregular heart beat, which occurred every day for the last 3 weeks. She says her symptoms don’t really bother her, but it was noted that her heart rate was irregular when her sister measured her blood pressure for the last several weeks. Your physical examination is unremarkable except for an EKG that shows atrial fibrillation at 110 bpm.

1. Risk stratification for stroke. The CHADS2 score is the most widely used risk stratification tool for persons with atrial fibrillation. CHADS2 incorporates congestive heart failure (1 point), hypertension (1 point), age over 75 years (1 point), diabetes mellitus (1 point), and history of stroke or transient ischemic attack (2 points) to predict the risk of stroke. AT9 indicates that at a CHADS score of 1 or greater antithrombotic therapy is recommended. Agatha’s CHADS score is 2 (age >75 years and hypertension). Therefore, she needs antithrombotic therapy.

2. Provide antithrombotic therapy for persons at sufficient risk as per AT9.1 After discussing currently recommended treatments (warfarin, dabigatran, rivaroxaban, and apixiban), Agatha and her sister agree to start warfarin.

3. Promptly initiate antithrombotic therapy. The most important aspects of taking warfarin are consistency, diet, and interfering substances (a topic to be discussed in future cases).

We ask patients to administer their warfarin at night. Why? Most patient monitoring is done during the day. In the event of a supratherapeutic INR, if the patient has not yet taken their daily dose, we may omit or reduce it that same day. In the event the measured INR is subtherapeutic, we may promptly (even that same morning) augment their dose.

Ultimately, however, consistency trumps time of day. If a patient remembers to take their warfarin as part of their morning routine when they brush their teeth, but their nights are more irregular, we’d prefer to go with whatever best fits their lifestyle. It is more important to find a consistent time of day that the patient is confident will lead to good adherence.

1. Patients with atrial fibrillation should first be risk stratified for the risk of stroke. CHADS2 and CHADSVasc are currently used, however the AT9 Guidelines recommend CHADS2 for its simplicity.

2. AT9 recommendations suggest antithrombotic therapy for patients with atrial fibrillation and a CHADS score of 1 or greater.

3. Administration of antithrombotic therapy at night may simplify management of out-of-range INR results.

4. Consistency of dosing administration is paramount. Even though nocturnal dosing is preferred, whatever time the patient feels will best suit consistency should be selected.

In the above case, the patient agreed to start warfarin. Our next column will cover how to initiate and monitor warfarin treatment on Agatha. ■

Eric A. Dietrich, MD, graduated from the UF College of Pharmacy in 2011 and completed a 2-year fellowship in family medicine where he was in charge of a coumadin clinic. He now works for the UF Colleges of Pharmacy and Medicine.

Louis Kuritzky, MD, is a family physician affiliated with the University of Florida Family Medicine Residency Program, where he commonly co-manages warfarin cases with his colleagues.