A 60-year-old woman presented with a severely pruritic rash that had begun 4 days prior. The rash had started on her chest and arms and spread to involve her face, neck, abdomen, and legs. As the rash progressed, a plethora of associated symptoms developed, including burning, swelling, oozing, and crusting, with gradual worsening of each.

Physical examination revealed multiple scattered vesicles, bullae, and erythematous plaques grouped in a linear arrangement, with some lesions having overlying crust (Figure 1). Further history revealed that the patient had been gardening 4 days prior and had removed a plant with 5 leaves attached to a vine. The rash had begun approximately 2 hours later.

Based on the history and clinical examination findings, a diagnosis of contact phytodermatitis, likely from Virginia creeper (Parthenocissus quinquefolia), was suspected and was later confirmed after the patient sent pictures of the plant that she had removed (Figure 2).

The patient was instructed to apply topical triamcinolone cream, 0.1%, as needed to the pruritic areas and was prescribed an oral prednisone taper, 0.5 mg/kg, for 14 days. 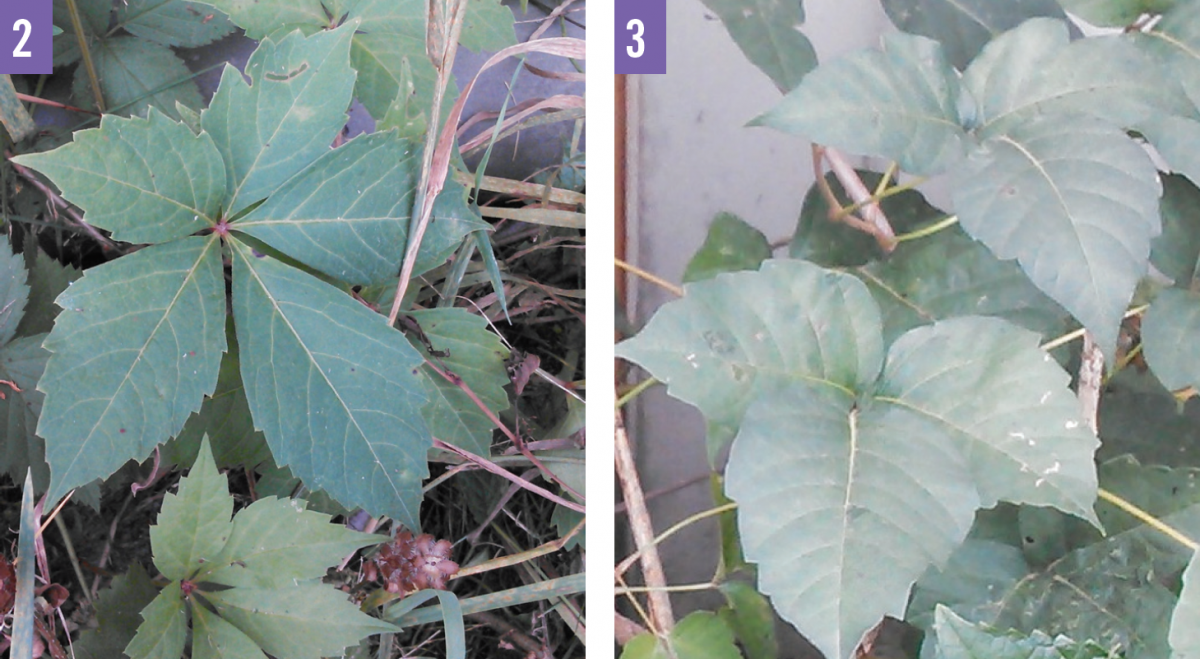 Discussion. Allergic contact dermatitis is a type IV (delayed) hypersensitivity reaction, with lesions resulting upon reexposure to a particular stimulus to which an individual has been sensitized.

Phytodermatitis is an allergic inflammatory skin reaction in response to the sap of particular plants.1 In the United States, the most common plants causing phytodermatitis are in the genus Toxicodendron (formerly Rhus), which includes poison ivy and poison oak.2 The lesions associated with exposure to these plant species are classically characterized by a localized, pruritic, erythematous rash with vesicles and papules oriented in a linear distribution.3

Virginia creeper is a climbing vine, the leaflets of which are red when they first emerge but turn green as they mature. In the fall, the leaves turn bright red to maroon.4 The plant is found throughout the Southern, Midwestern and Eastern United States.4 Because this plant often grows in similar areas and environments as Toxicodendron species, it is important to differentiate the plants by the number of leaves present.

While urushiol is known to be the allergen in Toxicodendron species, the primary allergen in Virginia creeper is unknown. Oxalate crystals are found in Parthenocissus plants; however, these crystals are mostly known for causing an irritant reaction after ingestion. Severe reactions due to oxalate crystals have been described after contact with dieffenbachia (dumb cane), causing pain and swelling after the plant comes in contact with the lips or oral mucosa.

Treatment of phytodermatitis from Virginia creeper, like that of poison ivy, primarily involves oral and topical corticosteroids. This treatment is often combined with antihistamines if the patient continues to experience pruritus, although antihistamines are generally not effective for the pruritus associated with allergic contact dermatitis.5 Typically, the rash resolves within 1 to 3 weeks, and the patients do not require further monitoring.6 Patients should be properly educated on identification and avoidance of Virginia creeper to prevent future reexposure. For confirmation that contact dermatitis is a result of Virginia creeper exposure, a patient should be patch tested.

When patients present with phytodermatitis, most health care providers immediately assume contact with Toxicodendron species due to its overwhelming prevalence. However, when a patient is certain that he or she has not been in contact with these 3-leaved plants, it is important to consider other causes of culprits, such as 5-leaved Virginia creeper.