University of Florida College of Medicine at Gainesville

A 6-year-old African American girl presented to the outpatient clinic with a 3-day history of vaginal itching, dysuria, and bloody discharge in her underpants. A similar event had happened 1 year previously, which had resolved with the use of sitz baths after all workup findings were negative (urinalysis for urinary tract infection [UTI]; vaginal discharge negative for infection). She denied any history of sexual abuse or trauma. She was appropriately developed without signs of secondary sexual characteristics, lived with her mother at home, and attended an all-girls academy. 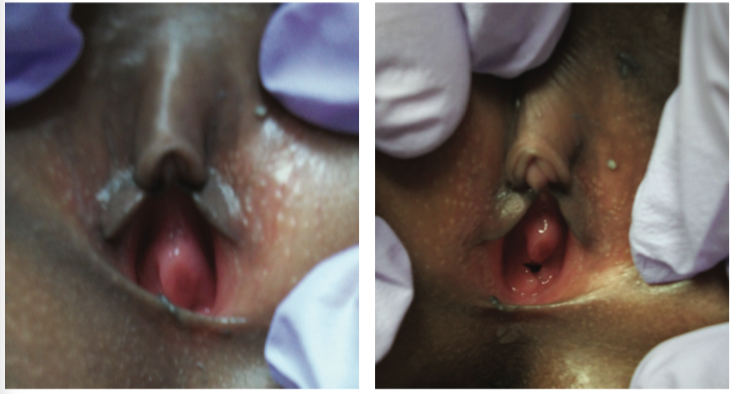 Her vital signs were normal, and she was in the 90th percentile for height and 88th percentile for weight. Physical examination findings were significant for a white discharge noted between the labia and a polypoid mass noted near the vaginal opening. Otherwise, the genital examination findings were unremarkable, with no evidence of bruising or bleeding. Urinalysis results were positive for large leukocytes and blood.

At that time, the patient was prophylactically treated with topical nystatin cream for yeast infection and oral trimethoprim-sulfamethoxazole for the UTI. A urine culture was sent for evaluation, and the patient was asked to return within 3 days if she did not experience improvement in her symptoms.

When she returned to the clinic, a more extensive physical examination noted prominent blood streaks in her underwear, in addition to a nontender, soft, round erythematous doughnut-shaped mass bulging in the anterior vestibule that obstructed the view of her vaginal opening.

The family declined topical estrogen cream, so we prescribed daily sitz baths and referred her to a pediatric urologist. When the urologist saw her 6 weeks later, her prolapse had almost completely resolved, and the urology team opted to forego surgical intervention.

Urethral prolapse is complete eversion of the distal urethral mucosa through the external meatus.1,2 It is most common in young African American girls (< 10 years) and postmenopausal white women, with a prevalence of 1 in 3000.3 Although the pathophysiology is poorly understood, it is thought to be secondary to poor attachment between muscular layers around the urethra and elevated intra-abdominal pressure due to obesity, chronic cough, or chronic constipation.4,5 A majority of patients exceed the 50th percentile for height and weight.2

Urethral prolapse presents as painless vaginal bleeding, or blood found in the patient’s undergarments. Concurrent urinary symptoms such as dysuria, urinary frequency, and urinary urgency are rare. On physical examination, an edematous, erythematous, doughnut-shaped protrusion is noted at the urethral meatus. If the clinical presentation is not sufficient for diagnosis, it can be confirmed by observation of urination via the central opening or catheterization through the prolapse.

Management of urethral prolapse can be conservative, procedural, or surgical. The initial approach is generally determined by severity, including the presence of necrosis in the tissue and extent of prolapse. Conservative treatment involves topical estrogen cream 2 or 3 times daily for 2 weeks and sitz baths to reduce the edema.4,6  Reduction of the prolapse under general anesthesia has been shown to be effective and is another option for families who wish to avoid surgical treatment.3 Alternatively, surgical treatment is done via excision of the excess mucosa over a Foley catheter and placement of suture to secure the remaining urethral mucosa to the vestibule.2,3

The optimal treatment algorithm is controversial. Conservative treatment with topical estrogen cream and sitz baths may be a good initial approach for mild symptoms, but the efficacy of such treatment ranges from 33% to 38%, and recurrence can occur.3, 7 Holbrook and Misra3 found that reduction of prolapse was successful in 3 of 7 patients, with continued conservative treatment of the other 4 girls resulting in near complete resolution of prolapse.Studies of surgical management have shown definitive resolution of prolapse, with minimal complications and a low risk of recurrence after 28 months.1,2

Urethral prolapse is an important diagnosis to consider, especially in young prepubertal children who present with vaginal bleeding. It can be easily diagnosed in the clinic and has effective options for management.