An Unusual Presentation of Crohn Disease

An 11-year-old boy presented to an outside hospital with 6 days of a cough and right upper quadrant abdominal pain that radiated to the chest. His pain was associated with nausea, nonbloody and nonbilious emesis, and anorexia. The boy had no history of fever, headache, shortness of breath, diarrhea, joint pain, weight loss, or rash, and the system review was otherwise negative.

Physical examination results revealed a well-appearing, obese boy in no distress. The patient’s vital signs were normal for his age. He had mild tenderness to palpation on the right side of the abdomen, but he did not have a palpable mass or organomegaly. His lungs were clear to auscultation, there was no lymphadenopathy, and his conjuctiva were clear. The perianal examination revealed no tags, fistula, or fissures. The results of the rest of the examination were unremarkable. The boy was subsequently transferred to our general pediatric medicine service for further evaluation and work up.

On admission day 2, the patient underwent a thorascopic lung biopsy in conjunction with upper and lower endoscopy to further investigate the pulmonary nodules and ileal thickening. Upper and lower endoscopy results revealed numerous ulcerations with erythema and friability in the stomach, duodenum, ileum, and colon. Lung biopsy results were significant for intra-alveolar edema and an aggregate of noncaseating granulomas surrounded by mild inflammation (Figures 2A and 2B). Lung biopsy staining results was negative for acid fast bacteria, fungus, yeast, Langerhans cell histiocytosis, and vasculitis.

Corticosteroid treatment was initiated with subsequent transition to immunomodulator maintenance therapy. The boy responded rapidly to induction therapy.  Granulomatous pulmonary involvement resolved 6 weeks into therapy (Figure 3). At 2-year follow-up, the boy continued to have a sustained clinical and biochemical remission. 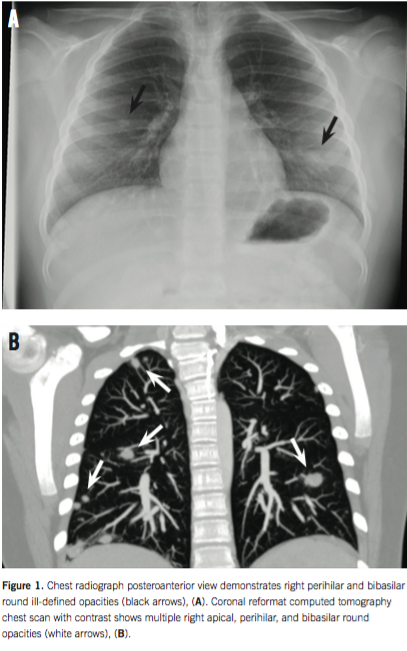 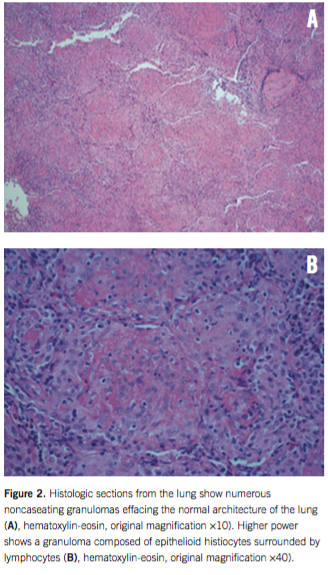 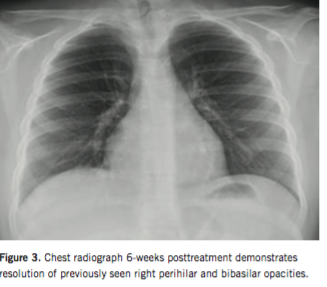 Crohn disease is an inflammatory bowel disease that can affect virtually every organ system, including the lungs.1-4 Although the disease is primarily characterized by gastrointestinal inflammation, up to 47% of patients experience extraintestinal manifestations.5-7

Our patient did not present with typical complaints of Crohn disease. Due to the patient’s chief complaint of cough and radiographic findings suggestive of a primary pulmonary process, we initially considered infectious or malignant etiologies. The ileal findings in conjunction with microcytic anemia and hypoalbuminemia raised the consideration for Crohn disease. Granulomatous inflammation in the lungs, so-called metastatic Crohn disease, is a rare manifestation of inflammatory bowel disease and should remain on the differential in a patient with pulmonary findings in this clinical setting.

Michael Malandra, MD, is from the Division of Gastroenterology, Hepatology, and Nutrition at the Ann & Robert H. Lurie Children’s Hospital of Chicago in Illinois.

Andrada R. Popescu, MD, is from the Division of Pediatric Radiology at the Ann & Robert H. Lurie Children’s Hospital of Chicago in Illinois.

Nitin R. Wadhwani, MD, is from the Division of Pathology at the Ann & Robert H. Lurie Children’s Hospital of Chicago in Illinois.

Jeffrey B. Brown, MD, is from the Division of Gastroenterology, Hepatology, and Nutrition at the Ann & Robert H. Lurie Children’s Hospital of Chicago in Illinois.