A 4-year-old girl had presented to her pediatrician with complaints of fever, abdominal pain, and right leg pain, and she had been diagnosed with viral gastroenteritis with myositis. She had also complained of recurrent boils and itching in the vaginal area, for which she had been prescribed clarithromycin and estrogen cream for presumed vaginitis. The girl had had 4 days of persistent fever and periumbilical and bilateral lower quadrant abdominal pain with guarding, so she was taken to the emergency department (ED) for evaluation. In the ED, a complete blood count revealed a white blood cell count (WBC) of 16.3 with 77% neutrophils without eosinophilia, and abdominal ultrasonography results showed a 5-mm noncompressible appendix with surrounding free fluid with intraluminal echogenic foci that suggested appendicitis. The girl was transferred to our institution and underwent a laparoscopic appendectomy. Initial surgical pathology revealed a mild nontransmural inflammation without serositis.

The girl experienced continued fever and abdominal pain after her appendectomy, so she was started on piperacillin-tazobactam for suspected bacterial peritonitis. A clean catch urine specimen grew extended spectrum ß-lactamase (ESBL) producing Escherichia coli, and this finding prompted a change in medication from piperacillin-tazobactam
to meropenem.

However, despite proper antibiotic therapy, the girl continued to be symptomatic, and she developed new onset cough and congestion with diminished breath sounds in the left lower lobe of her lungs. Chest radiography and repeat abdominal ultrasonography results revealed a left lower lobe pneumonia and pleural effusion with mild hepatosplenomegaly, despite aggressive incentive spirometry and ambulation.

At this point, vancomycin was started due to concern of superimposed gram-positive organisms, including the possibility of methicillin-resistant Staphylococcus aureus pneumonia. In addition, other studies were conducted. A viral respiratory panel; stool adenovirus test; hepatitis A, B, and C serology; HIV serology; stool Clostridium difficile test; antistreptolysin O titer; urine Streptococcus pneumoniae antigen; and parvovirus serology studies all were negative, but Epstein-Barr virus (EBV) serology results showed slightly elevated EBV by polymerase chain reaction with 350 copies/mL and positive EBV antibodies (both immunoglobulin G and immunoglobulin M), indicating an infection in the recent past. 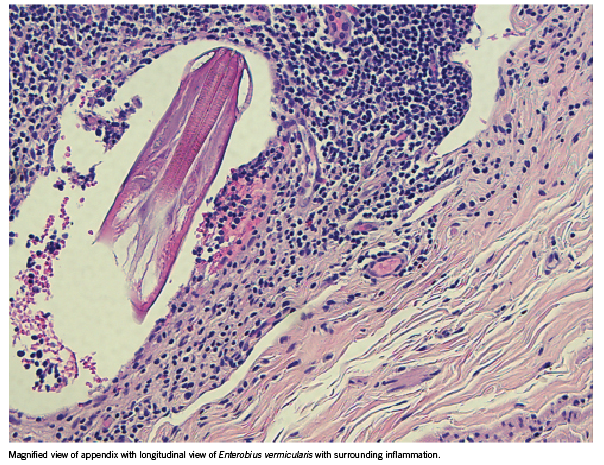 Peripheral smear findings were consistent with a leukemoid reaction, and multiple blood and repeat urine cultures were unremarkable. An initial read by the hospital pathologist revealed only mild focal inflammation, so the specimen was sent to the Centers for Disease Control and Prevention (CDC) for further evaluation. A final read by the CDC revealed Enterobius vermicularis infection, also known as pinworm.

As a result, the girl and her family received treatment with albendazole in the hospital, with instructions to complete a second dose in 2 weeks. The second dose and treatment of family members helps achieve higher cure rates with reduced chance of pinworm re-infection.1 In addition, the patient was switched from meropenem and vancomycin to oral clindamycin and cefdinir to complete treatment for pneumonia. The patient’s ESBL urinary tract infection was cleared during hospital stay.

At the time of discharge, the girl had responded well to treatment with an improving fever curve, WBC, and inflammatory markers. The patient and her family completed treatment as outpatients and followed up with their pediatrician, who reported a full recovery to baseline.

Appendicitis is a common abdominal operation, with more than 250,000 adults and children undergoing appendectomy annually.2 In particular, it is relatively common pediatric surgical diagnosis and has an annual incidence of approximately 37.2 cases per 10,000 American children ages 0 to 14 years.3,4

In the majority of cases of appendicitis, microscopic examination of the appendix typically reveals inflammation with either acute neutrophilic or subacute eosinophilic infiltration,5 and the exact etiology of appendicitis is often not pursued because the information frequently does not alter clinical management. However, in children such as our patient, who do not improve after appendectomy and do not have signs of peritonitis, the pursuit of less common etiologies may prove fruitful in diagnosis and management.