After having recently returned from a 2-month visit to Colombia, a 15-year-old girl with level L3 spina bifida presented with a chief concern of worsening visual acuity. She had had a valveless ventriculoperitoneal (VP) shunt placed at birth, which had never required a revision. When she was 11 years old, the results of radiographic shunt series had been unremarkable; at age 13, radiographs had shown evidence of a shunt disconnection. Because she had had no symptoms, no interventions were pursued at the time.

Approximately 7 months before the trip to Colombia, she had noted a single occasion of an abnormal visual sensation, which she described as feeling as if something were walking across her left eye. One month before the trip, she had noted a persistent line of blurred vision in the middle of the same eye. Shortly after having arrived in Colombia, all vision in her left eye became blurred. She denied having headaches. Although a baseline computed tomography (CT) scan was not available, results of a new CT scan taken in Colombia showed enlarged ventricles, and a shunt revision was recommended. She was prescribed corticosteroids and acetazolamide for the remaining 2 months of her trip. 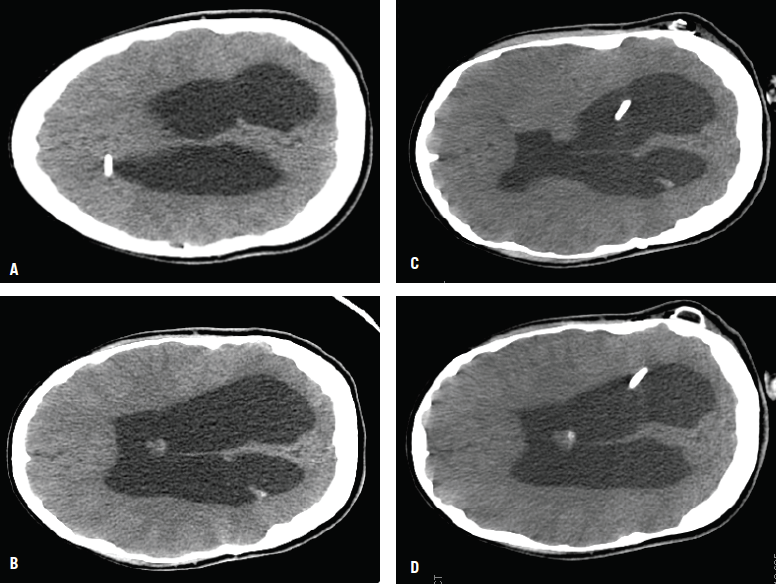 After her return home to the United States, a preoperative ophthalmology examination revealed bilateral optic atrophy and loss of color vision, constricted visual fields in the right eye, and the ability to count fingers only at close range in the left eye. She underwent surgical revision of the shunt; preoperative and postoperative CT images are shown in the accompanying Figure.

Now at 17 years old, the lack of vision in her left eye remains unchanged; peripheral fields and visual acuity in her right eye have returned to normal.

Colombia’s high altitude may have exacerbated the girl’s symptoms. The most populous areas of the country are between 900 and 3,500 meters above sea level, with the capital, Bogotá, at an elevation of 2,625 meters. Acute exposure to low partial pressures of oxygen at such altitudes can lead to blurred vision and changes in visual fields. Depending on the area of retinal involvement, unilateral or bilateral symptoms can occur, and outcomes can vary from complete resolution to complete blindness.1-3

Symptoms of VP shunt failure, a complication requiring a revision, commonly include drowsiness, headache, and vomiting.4 The reported incidence of failure is 30% in the first year and 4.5% per year thereafter.5 Visual changes are rare but can occur as an isolated finding. Increases in intracranial pressure (ICP) alter the retinal arterial blood supply and/or venous return and lead to optic atrophy. Nevertheless, unilateral vision loss is unusual in cases of shunt failure.6,7 Dilatation of the third ventricle may compress the chiasm against the skull and the left internal carotid artery. However, this likely would lead to bilateral heteronymous hemianopia rather than our patient’s unilateral hemianopia.6,7 Additionally, ICP may be become high enough to damage visual pathways without requisite ventricular enlargement. A “normal” or unchanged CT scan does not exclude shunt malfunction.8

Symptoms of shunt malfunction may be acute and dramatic or chronic and subtle. Disconnected shunts still may have a fibrous tract that allows cerebrospinal fluid to flow between the disconnected ends, and patients still may be shunt-dependent. Shunt malfunction can occur at any time, and continued vigilance is needed for changes in pupillary light reaction, exotropia, or restriction in peripheral vision, which should prompt a referral to an ophthalmologist.