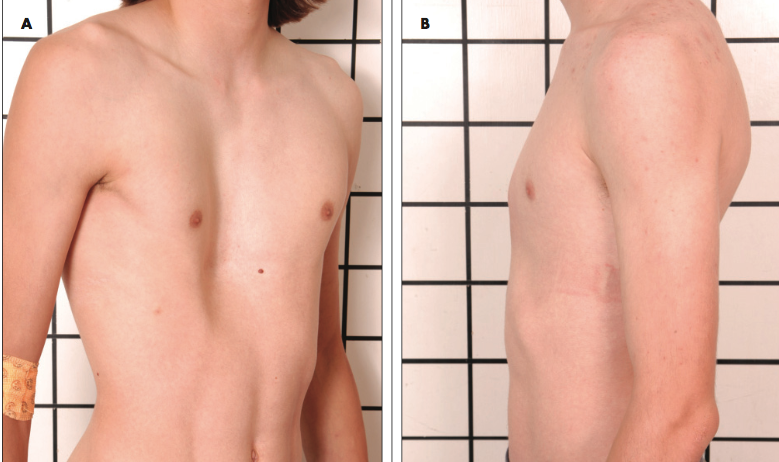 The 2 brothers shown here were born with chest wall anomalies. The 18-year-old brother (A) had daily chest pain and decreased stamina when swimming. His medical history was significant for persistent asthma that required use of 2 prevention medications and a rescue inhaler. Pulmonary function testing showed both restrictive and obstructive disease. Between the ages of 12 and 17 years, he wore a brace for scoliosis; serial radiographs showed a maximum right thoracic curve of 33º and a maximum left thoracolumbar curve of 35º. His review of systems was positive for gastroesophageal reflux that he sporadically treated with over-the-counter medications. His height, weight, and body mass index (BMI) were 186.7 cm (95th percentile), 59.6 kg (25th percentile), and 17.1 (less than the 5th percentile), respectively.

•What is the diagnosis?

•What treatment options are available? 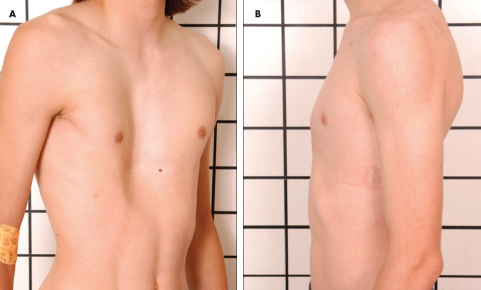 Pectus excavatum (PEx) and pectus carinatum (PC) are chest wall deformities that can present as isolated malformations or in association with a myriad of genetic disorders.1,2 The excavatum (inward) and carinatum (outward) are alternative outcomes of weak connective tissue in the chest. The older brother had PEx with a 45º tilt of the sternum to the right. Because of the marked asymmetry and tilt of his sternum, he underwent open sternoplasty. The younger brother had mild PC that has continued to improve with a compression brace.

Although the cause of chest wall deformities is unknown, familial tendencies have been reported. One large study on the inheritance of PEx included a 4-generation pedigree with 34 families; however, PEx and PC were not individually identified.2 PEx may be related to defects in connective tissue genes, such as fibrillin, collagen type II, and transforming growth factor ß.3,4 Global overgrowth of costal cartilage has been suggested as a possible cause6; however, this has been refuted.7 Further research is needed to establish a definitive cause of chest wall deformities as well as the relationship between PEx and PC.4

In general, outcome after surgical treatment of PEx is excellent. The brother with PEx was pleased with the outcome of his surgery. A variety of surgical techniques have been used to correct the deformity; the 2 most commonly employed are those described by Ravitch and Nuss. Unlike the need for an open sternoplasty as in the Ravitch procedure, the Nuss procedure requires 2 small thoracic incisions. A convex steel bar is then inserted and positioned such that the convexity faces anteriorly, thereby addressing the deformity. The bar is removed 2 to 3 years after its placement, when permanent chest remodeling is deemed to have occurred.

For PC, a recent Canadian study stated that bracing is the preferred treatment.8