Dr Myslenski is assistant professor of pediatrics at Case Western Reserve University and attending physician in the department of emergency medicine at MetroHealth Medical Center, both in Cleveland.

David Effron, MD––Series Editor: Dr Effron is assistant professor of surgery at Case Western Reserve University, attending physician in the department of emergency medicine at the MetroHealth Medical Center, and consultant emergency physician at the Cleveland Clinic Foundation, all in Cleveland.

While on a medical mission in the mountains of rural Honduras during the past 2 years, I met 2 patients, a 9-year-old boy and a 3-year-old girl, with the same skin condition. 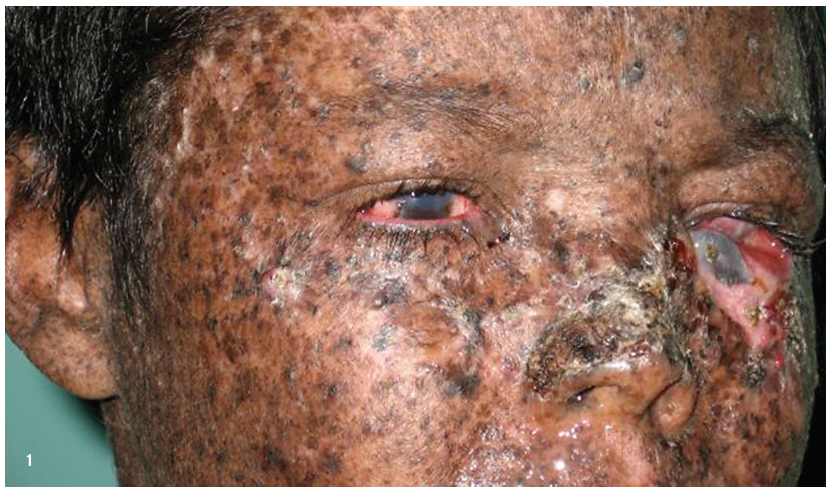 The 9-year-old boy was brought by his aunt to the clinic for evaluation of a worsening rash, loss of vision in the left eye, tumor in the left eye and the nose, and worsening vision in the right eye. He had had skin and eye problems for many years. The sun had always bothered his eyes and he avoided sunlight. He eventually stopped playing outside and going to school. He was otherwise well. He denied any current or recent fevers, chills, weight loss, body aches, headaches, vomiting, diarrhea, or cough. The patient had no siblings. Both of his parents had died in an accident a few years ago. He was being raised by his aunt and distant relatives. He had no hospitalizations or surgeries and no recent medication use.

On examination, the patient was shy and tried to hide in a corner away from the door and windows. His skin was dry and scaly and characterized by mottled hyperpigmentation and atrophy. There was a visible growth on his nose and left eye (Figure 1). Heart, lung, abdominal, neurological, and musculoskeletal findings were all normal. There was no lymphadenopathy.

I returned to Honduras a year after my initial visit and was able to see the boy. His condition had significantly worsened, and he complained of severe daily headaches. The family was not able to take him to a specialist. I learned that he died several months later. 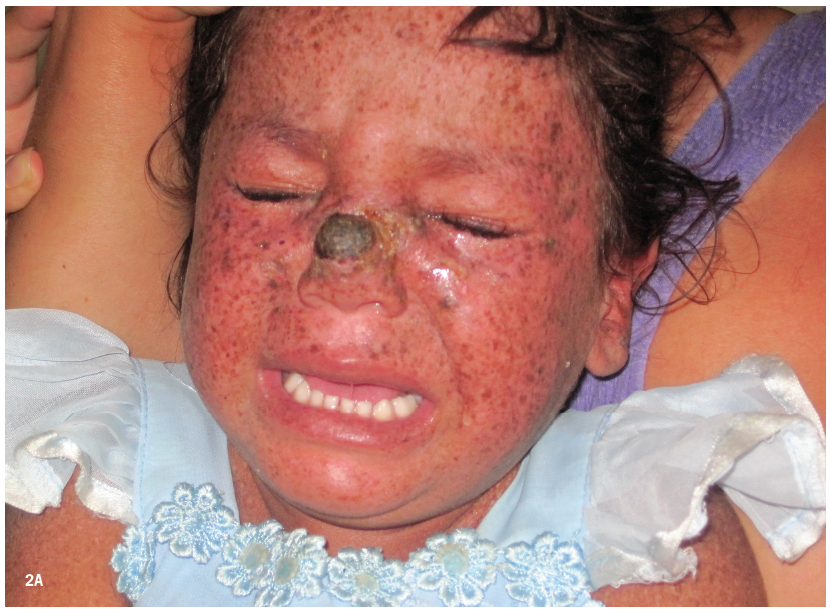 The 3-year-old girl was brought by her mother for evaluation of a rash and growth on the nose. She had severe photophobia. Both parents and the child’s sister were healthy. The patient’s past medical history was unremarkable.

On examination, the child had diffuse dry, scaly skin with mottled hyperpigmentation and atrophy and a growth on her nose (Figures 2a and 2b). Remaining physical findings were normal. 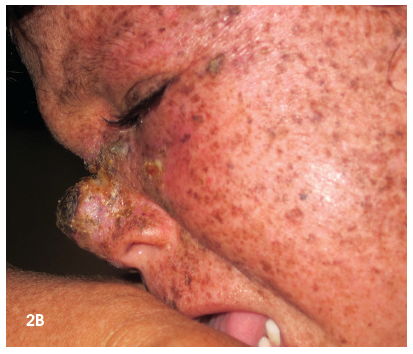 What is the cause of the rash in these 2 children?

XP is caused by mutations in genes that are part of a DNA process known as nucleotide excision repair (NER). Defects in these genes lead to deficient repair of DNA-damaged skin from UV radiation. Inherited mutations in at least 8 genes have been found to cause XP. More than half of all cases in the United States result from mutations in the XPC, ERCC2, or POLH genes. The proteins produced from these genes play a variety of roles in this process. They recognize DNA damage, unwind regions of DNA where the damage has occurred, excise the abnormal sections, and replace the damaged areas with the correct DNA. Inherited abnormalities in the NER-related genes prevent cells from carrying out one or more of these functions.

Incidence. The frequency of XP in the United States is about 1 case per 250,000 population. It is estimated to affect about 1 in a million persons in the United States and Europe. The condition is more common in Japan, North Africa, and the Middle East. XP is reported in persons of all races. An equal prevalence has been reported among male and female patients.

Clinical manifestations. The disease is usually detected at age 1 or 2 years. XP typically passes through 3 stages. The skin is healthy at birth with the first stage of XP appearing after age 6 months. Severe, persistent sunburn develops in most affected children after they spend just a few minutes in the sun. Skin redness and blistering can last for weeks. By age 2 years, almost all children with XP have freckling of the skin in sun-exposed areas (such as the face, neck, arms, lower legs, and lips) and dry, scaly skin. While these features tend to diminish during the winter months with decreased sun exposure, they eventually become permanent.

The second stage is characterized by skin atrophy, telangiectasia, and mottled hyperpigmentation or hypopigmentation. The third stage is characterized by the appearance of numerous malignancies. Although basal cell carcinoma and fibrosarcoma develop in some patients, metastatic malignant melanoma and squamous cell carcinoma are the most common causes of death in XP. Without sun protection, these malignancies may occur as early as age 4 or 5 years and are more prevalent in sun-exposed areas. Most persons with XP have multiple skin cancers during their lifetime. Studies suggest that patients with XP may also have an increased risk of other types of cancer, including brain tumors. Fewer than 40% of patients survive beyond age 20 years.

Ocular complications. Eye problems develop in 80% of patients with XP. Initially, children have worsening photophobia and painful conjunctivitis. Eyelid solar lentigines occur during the first decade of life and may transform into malignant melanoma. Ectropion, symblepharon with ulceration, repeated conjunctival inflammation, infections, and scarring may develop in these patients. In addition, vascular pterygia, fibrovascular pannus of the cornea, and epitheliomas (of the lids, the conjunctivae, and cornea) can occur. Squamous cell carcinoma, basal cell carcinoma, sebaceous cell carcinoma, and fibrosarcoma can also involve the eyes of patients with XP.

Diagnosis. No consistent routine laboratory abnormalities are present in patients with XP. The diagnosis of XP can be established with studies performed in specialized laboratories. These studies include cellular hypersensitivity to UV radiation and chromosomal breakage studies, complementation studies, and gene sequencing to identify the specific gene complementation group.

Treatment. The goal of treatment is to protect the patient from sunlight. Regular visits to the dermatologist are necessary for the purposes of patient education and early detection and treatment of any malignancies.

The use of sunscreens and other sun-avoidance methods (eg, protective clothing, hats, and sunglasses) can minimize UV-induced damage in patients with XP. Sunscreens should be applied to all exposed surfaces (including the hands, the back of the neck, the ears, the lower lips, and the anterior part of the chest) whenever UV exposure is expected.

Sunblocks should be used, even in winter months and during evening and early morning hours. The exposed surfaces of the skin should be shielded with protective, double-layered clothing and broad-brimmed hats. The eyes should be shielded with UV-absorbing sunglasses with side shields. Other sources of illumination can be hazardous and should be pointed out to patients; for instance, fluorescent lights that emit radiation below 320 nm can be dangerous to patients with XP.

Potential therapies. Oral retinoids have been shown to decrease the incidence of skin cancer in patients with XP. They decrease the cohesiveness of abnormal hyperproliferative keratinocytes, and they may reduce the potential for malignant degeneration. They modulate keratinocyte differentiation. This therapy is limited by dose-related irreversible calcification of ligaments and tendons in children.

A new approach to photo protection is to repair DNA damage after UV exposure. This can be accomplished by delivery of a DNA repair enzyme into the skin by means of specially engineered liposomes. Gene therapy for XP is still in a theoretical and experimental stage.

Referrals. Consultations with an ophthalmologist and a neurologist are recommended because of the ocular and neurological abnormalities associated with XP. Genetic counseling should be offered for families at risk. Antenatal diagnosis is possible by amniocentesis or chorionic villi sampling. As with most autosomal recessive disorders, there is usually no family history; the parents, being heterozygotes, are healthy.

Cockayne syndrome is a rare genetic disorder caused by mutations in either the ERCC6 or ERCC8 gene. These genes provide instructions for making proteins that are involved in repairing DNA damaged by UV rays, toxic chemicals, radiation, or free radicals. Cockayne syndrome is characterized by premature aging and short stature. Children present with failure to thrive, microcephaly, developmental delays, and extreme photosensitivity.

There are 3 subtypes of Cockayne syndrome. Type I, the classic or moderate form, is characterized by symptom onset after the age of 1 year; failure to thrive; impairment of vision, hearing, and central and peripheral nervous systems; severe photosensitivity; severe disability; and death in the first or second decade. Type II, the more severe form, presents as growth failure at birth and little or no postnatal neurological development, congenital cataracts or other structural abnormalities of the eye, and early postnatal contractures of the spine and joints; death usually occurs by age 7 years. Type II overlaps with cerebro-oculo-facio-skeletal syndrome. In type III, the milder form, symptoms appear later in childhood.

Congenital erythropoietic porphyria is an autosomal recessive disorder caused by deficient activity of the enzyme uroporphyrinogen III synthase, which leads to accumulation of porphyrin isomers: uroporphyrin I and coproporphyrin I. The clinical severity is variable, ranging from severe hemolytic anemia in utero resulting in hydrops fetalis to only cutaneous lesions later in life.

Most patients have severe photosensitivity in early infancy. Increased friability and blistering of the epidermis is common. Bullae and vesicles are prone to infection and may result in severe scarring; deformities; loss of fingernails or digits; and damage to the eyelids, nose, and ears. Corneal scarring can cause blindness. Mild to severe hemolytic anemia is typical. Splenomegaly, leukopenia, thrombocytopenia, pigmented gallstones, and bleeding problems develop in many children. Pink or reddish-brown staining of diapers from increased urinary excretion of porphyrins may be the first clue to this disorder. Porphyrins deposited in the teeth produce a reddish-brown color.

Cerebro-oculo-facio-skeletal syndrome is a genetic degenerative disorder that involves the brain and spinal cord. A small number of cases are caused by a mutation in the ERCC6 gene and are linked to Cockayne syndrome type II. Other cases may have defects in the xeroderma pigmentosum genes XPG and XPD. Affected patients have craniofacial and skeletal deformities, severely reduced muscle tone, and impairment of reflexes. Physical examination findings may include large and low-set ears, small eyes, microcephaly, micrognathia, clenched fists, wide-set nipples, vision impairments, involuntary eye movements, and developmental delay. Children have frequent respiratory tract infections. The condition is typically diagnosed at birth but can be detected on prenatal ultrasound examination. It is a fatal disease. Most children do not live beyond 5 years.