DISCLAIMER:
The views expressed in this article are those of the authors and do not reflect the official policy or position of the Department of the Navy, the Department of Defense, or the United States Government.

It is very unusual to observe herpes zoster (shingles) involving multiple adjacent dermatomes as was seen in 2 otherwise healthy patients who presented to an outpatient dermatology clinic within 2 weeks of each other.

Case 1. The first patient was a 74-year-old woman who presented 6 days after the onset of multiple vesicular bullous lesions on the left side of her face, scalp, neck, shoulder, and thorax (Figures 1 and 2), which involved the mandibular division of cranial nerve V, cervical spinal nerves C1 through C8, and thoracic spinal nerves T1 through T3. She had mild overlying yellow crust in various areas of the rash. She complained of moderate pain of the involved areas. 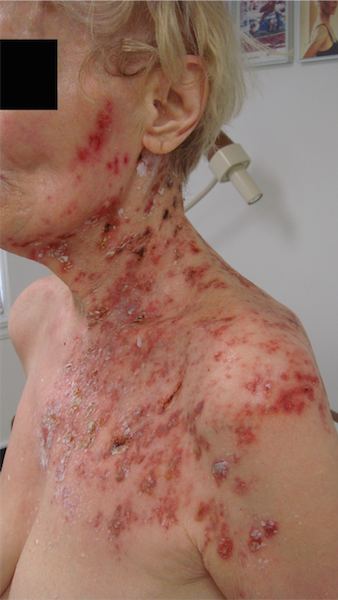 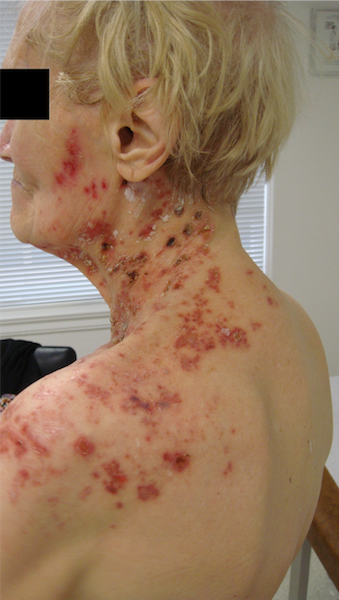 On follow-up examination 6 days after her initial presentation, the patient had experienced significant improvement of her vesicular bullous lesions, the secondary infection had completely resolved, and she had no associated pain.

Case 2. The second patient was a 65-year-old man who presented 3 days after having developed a tender rash on the left side of his neck. Upon examination, the patient had some mild swelling with new developing lesions on the left side of his face, scalp, shoulder, and chest (Figure 3). As in the first patient’s case, the man’s lesions involved the mandibular division of cranial nerve V, cervical spinal nerves C1 through C8, and thoracic spinal nerves T1 through T3. 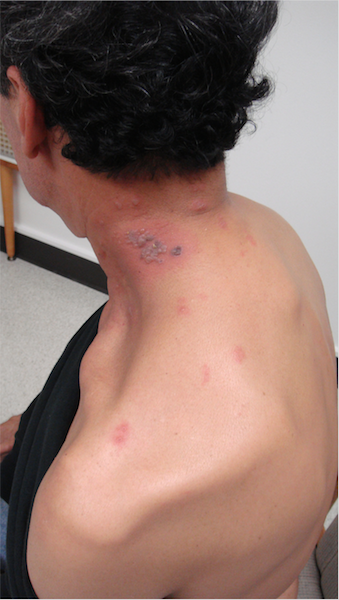 This patient also received a diagnosis of multiple dermatomal herpes zoster. He was treated with oral famciclovir and oral prednisone, both for 10 days. In addition, he was given an astringent cream with topical triamcinolone and aluminum acetate topical solution.

Discussion. Herpes zoster is caused by a reactivation of the varicella-zoster virus. Once a patient has had a primary infection or vaccination, the virus remains dormant in the dorsal root ganglia cells. Upon reactivation of the virus, the rash is generally distributed unilaterally along 1 dermatome, with some possible extension into an adjacent dermatome.